Paris is a whiny milquetoast dishcloth. An impulsive love rat who ignores both decorum and duty to elope with Helen, thereby igniting the war that will doom his city of Troy.

He doesn’t do much after that. He flees from a duel with Helen’s husband, Spartan king Menelaus, that could’ve settled their business without anyone else dying. He then spends the rest of the war in bed with Helen while braver men fight to defend them both, occasionally taking potshots at the Achaeans (Greeks) with his little bow and arrow. Even Helen despises him by the end of the story. That such a pitiful man – by Classical values, at least – fires the arrow which kills the mighty Achilles is presented as part of the latter’s tragedy.

At least, that’s how it goes in the Iliad, the famous poem of the Trojan War that defined the word ‘epic’. To its author Homer, Paris is a plot device for starting the war and a foil to highlight the qualities of the heroes we’re meant to admire. He’s a supporting character, but obviously, if you pick him in A Total War Saga: Troy, he becomes the star by definition. How would a story like that work?

I’ll tell you, because I’ve played it. All eight of Troy’s playable heroes get a unique quest line in which developer Creative Assembly retells the Iliad from their perspectives. Paris’s story sees him clean up the mess he started by defending Troy, conquering Sparta, and, through occasional branching choices, wrestle with his central conflict: his desperate love for Helen, and his duty to his city. He gets a shot at redemption.

You’ll love this if you have any appreciation for the source material, but I’m conscious that my own fondness for the Iliad lubricated my imagination when it came to reading pop-up boxes, which are still the chief means by which Total War tells stories. You may get a lot less mileage if you’re coming to Troy ‘fresh’, as it were.

These quests throw up one or two problems in gameplay, too. That mission to conquer Sparta makes sense in theory – a version of the Iliad with Paris as the star probably should have him settle the score with Menelaus. In my game, however, Menelaus had confederated most of Greece to become my only serious opposition. I wound up achieving the traditional Total War ‘domination’ victory – with all its problems of late-game boredom as I ‘paint the map’, having become too big to stop – before I completed Paris’s quest line.

It’s hard to say how typical that situation will prove to be. All of Troy’s factions are divided between Achaean sympathisers and Trojan ones, which tend to clump together into vast power blocs. That process is chivvied along by certain factors that are consistent across every game, including the major heroes’ friendliness with one another, and a campaign event that encourages you to join your own cultural bloc. 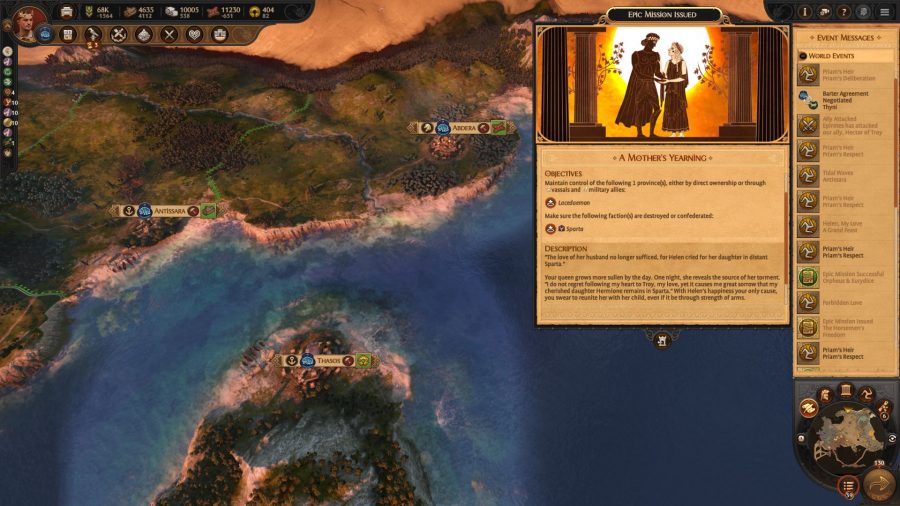 This differs from Three Kingdoms’ much more elegant endgame, in which all remaining factions are split between the three biggest powers when one declares itself Emperor. Imagine if Warhammer’s Mortal Empires campaign tended – even more than it already does – to coalesce around the good and evil factions, and you’ve got a pretty good sense of how Troy’s campaign plays out. The two maps are actually comparable in size, which should tell you just how vast Troy is – this really doesn’t feel like a smaller scale ‘Saga’ title; it feels every bit as epic as its source material.

It has the production values to match its scale. This is a very handsome game: the UI drips with black, bronze, and terracotta red, and tweaks to lighting and water help to capture that special atmosphere of the Mediterranean: gently glowing fires dot the islands at night, waves lap against alabaster beaches, and the filmic, washed-out light of morning is spot on. Turn off the campaign map UI with a press of the ‘K’ button and zoom in, and you may find yourself booking an island-hopping holiday. I’ll say it: it’s prettier than Three Kingdoms.

I’m less keen on the stylised approach CA has taken to character designs. I understand that they want the big heroes to stand out, but in many cases they just come off weird. Achilles’s helmet hair makes him look like a Twi’lek from Star Wars, especially in the duel animations that occur when auto-resolving battles, where his model lacks some detail. Certain UI elements, such as icons and text, are also far smaller than in previous games, which gives a fiddly, squinty feel that takes some getting used to. 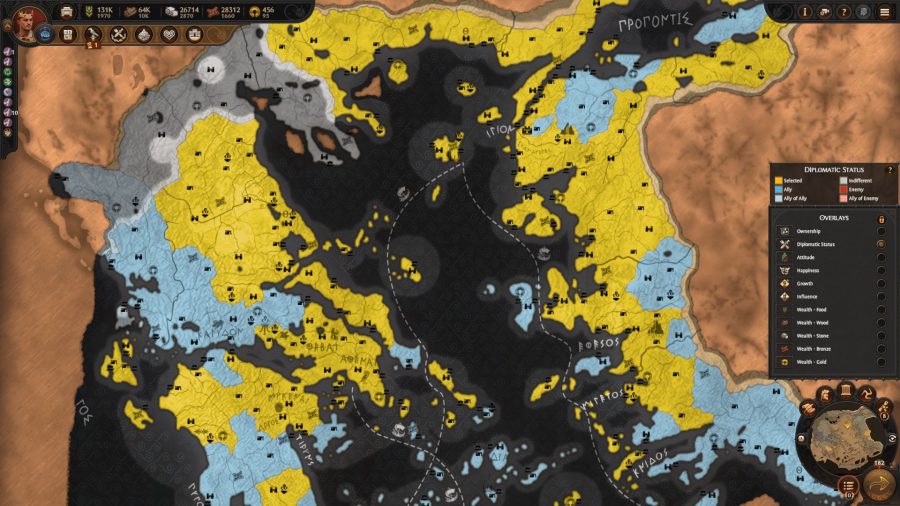 My impressions at the preview stage that the multiple resource economy was a good change were inaccurate. It is in fact the best change Total War has made to its campaign in ages. Given that minor settlements produce these resources, and province capitals do not, they now matter enough to seriously influence your next choice of conquest. Separating the resources that sustain your troops and build your cities also means you don’t have to choose between the two, and will usually be able to take some meaningful action on every turn. But the impact on diplomacy is even more notable.

Turn off the UI and you may find yourself booking a holiday to Greece. I'll say it: Troy is prettier than Three Kingdoms

Previously, my overriding concern in geopolitics was to avoid having anyone attack me before I was ready to attack them. In Troy, however, the economy is tuned to make regular bartering a necessity. I never quite feel that my own treasury can supply enough food for all the armies I need at any given time, so I have to make peace with running the occasional deficit and making deals with whoever will listen. This means maintaining relationships and a trustworthy reputation are crucial. I’m also more minded to agree to alliances than ever – their propensity to drag you into unplanned wars matters less when you’ll generally be sucked into battle against half the world anyway, and when the map is this vast and full of water, military alliances are useful for extending your line of sight and spotting distant armies before they reach your shores.

Diplomacy has never felt more necessary or intricate, which is why it’s a shame that you can only trade territory or resources rather than the dizzying list of goods and promises available in Three Kingdoms. At the very least, character items could’ve easily been included. 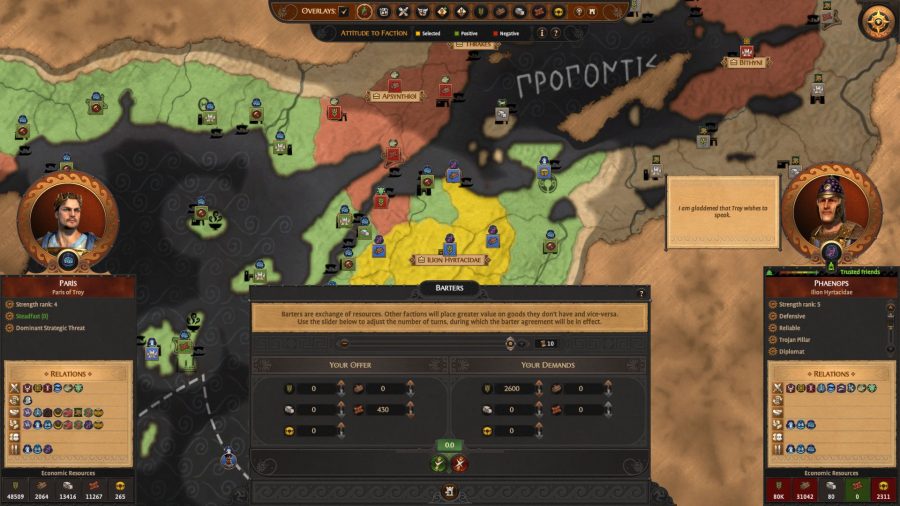 Two steps forward and one step back, then, but I do get why developers sometimes need to pare back new entries in long-running series to stave off feature bloat and overcomplication. Fortunately, Troy manages most of its additions well. Outside of some forced quest objectives, the introduction of gods to please is more of an option than a necessity. Give Aeneas a try if you want to dive into this more – in a delicate balancing act, his quest requires you to attain moderate favour with all gods, while one of his unique mechanics costs you that same favour to use.

Each of Troy’s eight heroes gets two such mechanics. Paris’s competition with his brother Hector over their dad’s affection and need for regular booty calls with his wife are both flavourful, but the latter flirts with busywork as you ship Helen all over the world to be near to her husband. By contrast, Menelaus’s abilities to remote-colonise any ruin he can see without needing an army, and to recruit his allies’ troops, dovetail elegantly with diplomacy’s new prominence. They enhance the campaign, subtly changing your playstyle without hemming you in. Battle fans will appreciate Achilles for similar reasons – his need to prove himself against every other warrior nudges you into fighting battles rather than auto-resolving, where you can issue challenges and build his reputation from the ground up. 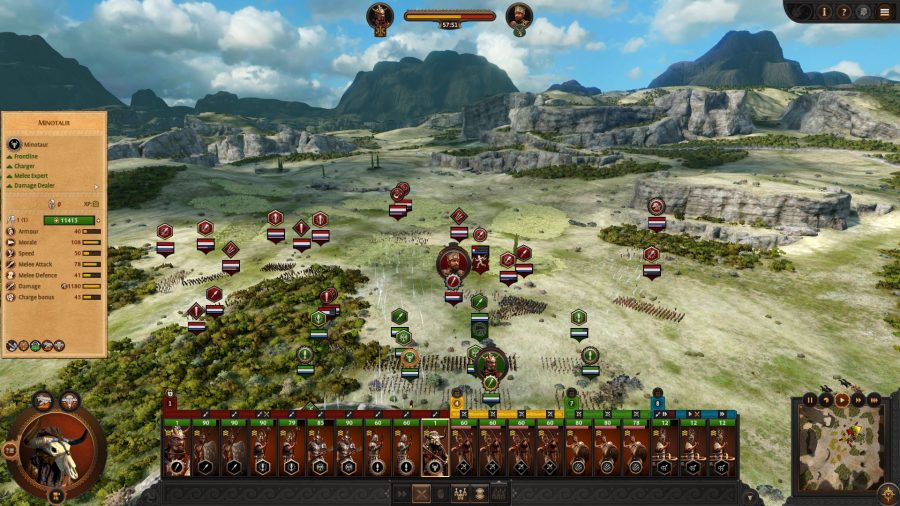 Troy’s battles are comparable to Three Kingdoms’ in pacing, being slightly slower than Warhammer’s. Apart from the occasional chariot or centaur, every unit is some variety of infantry, but the introduction of weight classes ensures that the fundamentals of Total War combat remain in place: armoured heavy infantry are anvil units, meant to hold the line, while fast-moving light infantry supplant cavalry as your flankers and shock troops.

Troy has plenty of distinctive and tactically demanding spice to complement this standard fare. Chariots and abundant javelins – most of whom can hide in Troy’s new long grass terrain, and some even in open ground – play around the flanks. Heroes in four broad classes can make a pivotal contribution, though their abilities are less flashy than Warhammer’s fireballs and much more akin to Three Kingdoms’ buffs and debuffs. Finally, there are the quirky ‘mythological’ units, which are more widespread than you might think – tribes of centaurs, giants, harpies, and sirens are not uncommon throughout Greece and the isles of the Aegean sea. It’s all familiar enough to grasp quickly, with enough nuance – especially for trickier heroes like Odysseus and Achilles – to give veterans plenty to learn.

I have a few minor complaints. The script is full of such anachronistic colloquialisms as “bring the pain”, “let us do this,” and “I’ll get on it”, which sit awkwardly alongside the Homeric style. When giving long-distance move orders the pathfinding will default to sending heroes across land rather than the far more efficient course of putting them to sea, which is extremely stupid and annoying, like the AI’s frequent requests for free stuff. More than once, a hero got stuck with the negative ‘hides behind walls’ trait on the very turn that the AI attacked their city – that is, before I had a chance to act – contrary to the tooltip indicating it’s only earned for spending “multiple” turns under siege.

But such blemishes are well within the bounds of the tolerable. The unnecessary simplification of diplomacy and occasionally misaligned victory conditions are potentially more serious, but even after the marathon campaign produced by the latter, I’m still eager to finish what I started with Odysseus and Menelaus. And start a new campaign as Aeneas. And Sarpedon. Probably Achilles. Maybe Agamemnon, too.

I think that probably says enough. This is the most beautiful Total War yet, and vies with Three Kingdoms for the best campaign layer. It’s an excellent debut for CA’s new Sofia studio and feels a far more essential purchase for series fans than the more niche appeal of Thrones of Britannia.

Vast, beautiful, and every bit as epic as its subject matter, Troy's designation as a 'Saga' doesn't reflect a brief spin-off, but a soaring remix of the Iliad, with just the occasional annoyance or backwards step.