After a cheeky leak or two, A Total War Saga: Troy was officially revealed last week. It was first shown to press at Gamescom, and boy was it tough not to yell about how pretty it looks during the intervening month. When the time came I did basically that in an article, where you can read more about the demo I watched and the headline features of a Total War Saga: Troy.

But I then got the chance to sit down with lead game designer Todor Nikolov for a more in-depth chat about what I’d just seen, and the key lessons learned from the divisive first Saga game, Thrones of Britannia. These include refinements of the resource system and a new take on what’s become a staple Total War feature: the endgame plot twist that aims to keep the campaign interesting even after you’ve topped the strength ranks, when previously you’d be looking at a boring stroll to a formal victory.

Read on for all this and more. A Total War Saga: Troy is due for launch on Steam some time next year.

PCGamesN: What have you learned from the last Total War Saga, Thrones of Britannia?

The recruitment system is more like the classic Total War approach that can be seen in Warhammer, where you just recruit your units and they come at full strength, instead of what was introduced in Thrones of Britannia and later can be seen in Three Kingdoms.

Are there any other refinements to long-standing Total War systems you could highlight? How do agents work, for instance?

In relation to the agents, we’ve got six of them. We have three common agents, which will be familiar to any Total War player. We’ve got the spy, the priestess, and the envoy, each performing different actions on the campaign map, which are related to different aspects of gameplay. For example, the priestess is going to interact with the gods and favour system, and the spy’s going to be that kind of assassin/saboteur guy.

Earthquakes will hit Troy every so often, and it's much easier to take the city

We’ve also got three epic agents, which differ from the common agents because they do not level up. They have a more limited set of actions, but the actions they can perform are very powerful. Their flavour is related to the mythological aspect of the story – for example, the Seer can perform a quest, and upon reaching a certain region of the map, she can affect the conflict between the gods on Olympus. This in turn affects every faction in the game, because of how the gods and favour system works.

We can see from the trailer that Mount Olympus is on the map. How else can we interact with it?

You’re going to see it in the battle map if you’re fighting at the foot of Mount Olympus. There are a certain number of points of interest spread across the map, and if you can control them, you get different gameplay affects. 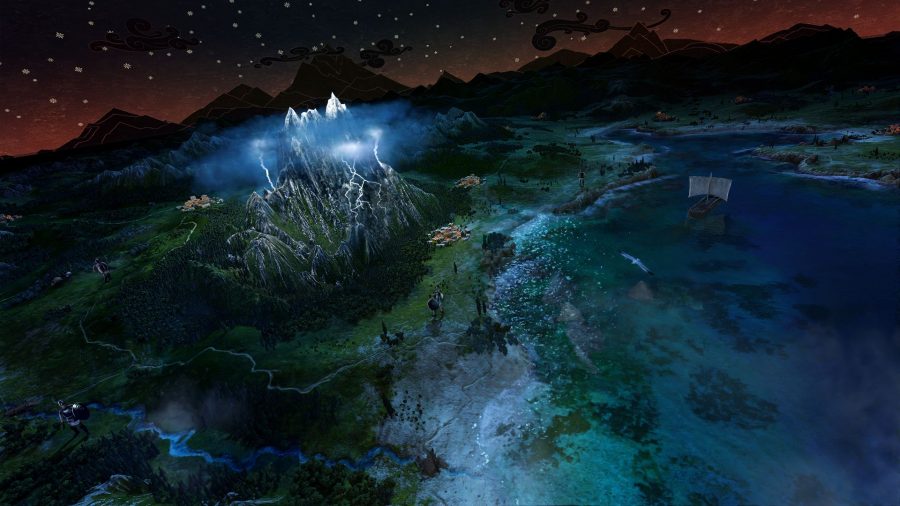 We’ve got faction mechanics for the hero Aeneas, for example, who can talk with dead characters – or maybe he pretends that he talks to them. So if you manage to, for example, capture the region which holds the tomb of Hercules, Aeneas can claim that he can commune with Hercules and bestow his wisdom upon his troops.

So Aeneas is one of the faction leaders, then?

Yeah. His faction’s called Dardania, which is a land in the vicinity of Troy.

There’s a huge cast of characters in the Iliad. Was it difficult to decide which to represent in the game?

We had to make some tough decisions, especially when related to the Achaeans – the Greek characters – because as The Iliad is about their victory and they are portrayed as the good guys, there is a greater variety of characters to choose from. We have set upon Achilles, Odysseus, and the two brothers Agamemnon and Menelaus as the most vital to the story.

You’re missing people like Ajax for instance, then. Is that an option for DLC?

Yes, it could be. It could be something we are discussing. 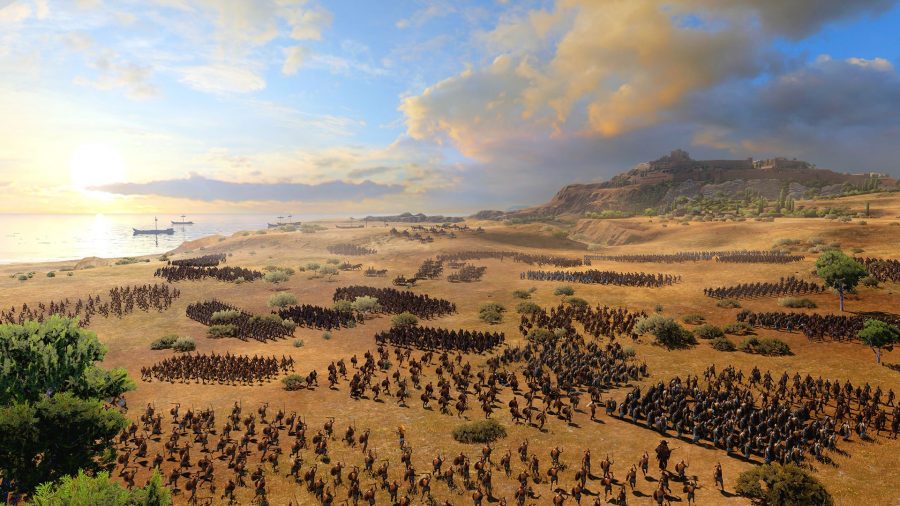 Presumably the Trojan Horse has to feature at some point. How have you represented that?

Archaeological research also shows that at a certain point when Troy was under siege, there might have been an earthquake, because signs of violence coincide with piles of rubble that an earthquake may have left. What this means in the game is that events will happen every so often in which an earthquake hits Troy. Buildings are damaged, the garrison is severely depleted, and you get a different battle map of Troy, where there are breaches in the walls.

It’s much easier to take the city then. So if your aim is to capture Troy, you need to look for these windows of opportunity, and if you’re one of the factions that wants to defend the city, you need to be extremely careful when the earthquake strikes. You need to send help to the city, if it’s threatened in any way. 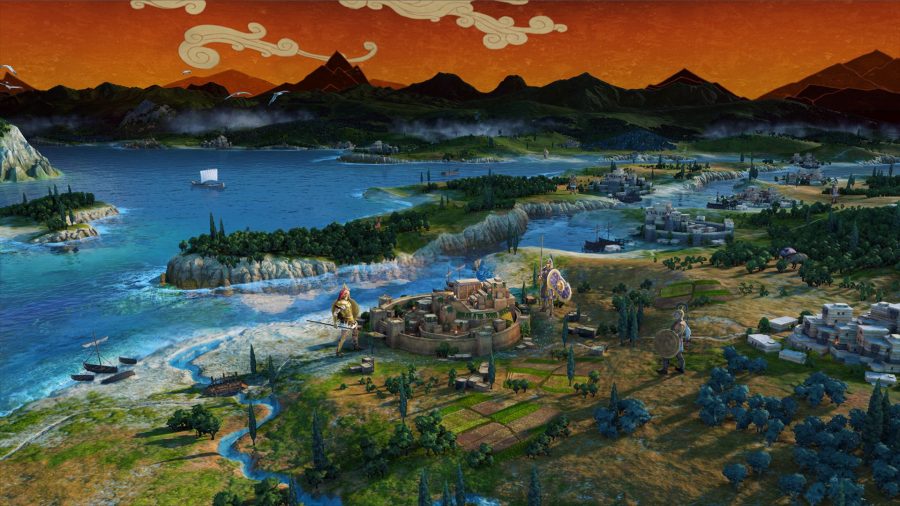 Sounds like Troy is an appropriately divisive flashpoint. How does that affect the traditional sandbox structure of Total War? Is it possible for Greeks and Trojans to make peace?

We have tried to make the game as ‘sandbox’ as possible when it comes to that. Generally it’s expected that the Achaeans will band together and march against Troy, but it’s up to the player to decide whether they will join them, not join them, decide to repel them, or decide to do something else. So you can play as the Achilles who marches against Troy and razes the city to the ground, or you can play as the Achilles who turns against Agamemnon long before Agamemnon ever insulted him, and just becomes a renegade.

Does that extend to even the strongest relationships? For instance, is it possible for Hector to turn on his father Priam and take Troy by force?

It’s possible. It’s going to be extremely difficult to pull off, because Troy has many friendly factions nearby. So with Hector, for example – if you decide at the beginning of the game: ‘that brother of mine, I’m going to slap him!’, everyone will hate you, and it will be up to you to survive. You will possibly be driven out of your homeland, you may need to find some new territory, and use it as a staging ground to wage your war against Troy. It’s going to be hard, but it could happen. You get to tell the story of the Trojan War, or you get to make your own Trojan War. Maybe a different kind of war.

We do not want to control the player. We want to keep the player as free as possible in order to maintain the sandbox nature of the game. The problem we have to solve is that whatever the player decides to do, we need to ensure the AI behaves adequately. 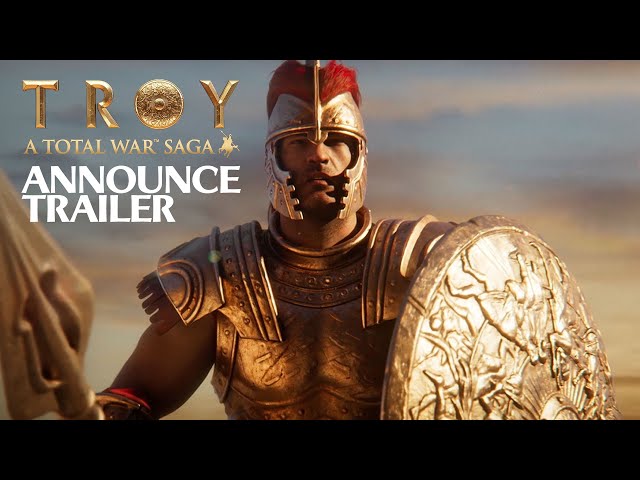 For example, we are implementing an endgame escalation in which the game appoints a suitable adversary to serve as an endgame boss. [That adversary] will depend on whether the player is following a normal flow, like from Greece to Troy, or whether they have betrayed their allies and are going against them. So it’s a new challenge to choose the most appropriate enemy for you to serve as your endgame boss.

Sounds like that’ll be an enemy that’s already on the map, right? [As opposed to the invasion at the end of Thrones]. So are they given buffs to make them into this endgame threat?

Yeah they are given buffs, sure. But more importantly we’re also making their AI behavior a bit more unpredictable. It’s supposed to react to what you do to a certain degree, and make plans of its own. We’re planning to sort of guide the player towards what this endgame adversary might be doing at certain points with a bespoke interface.

For example: you’re Achilles, and Hector is your endgame adversary, your antagonist. You get this screen where you can see roughly what he’s planning, what his next action is going to be, and you have to adapt. You have to react appropriately. Most likely, you are going to want to provoke a certain kind of behaviour out of the AI. 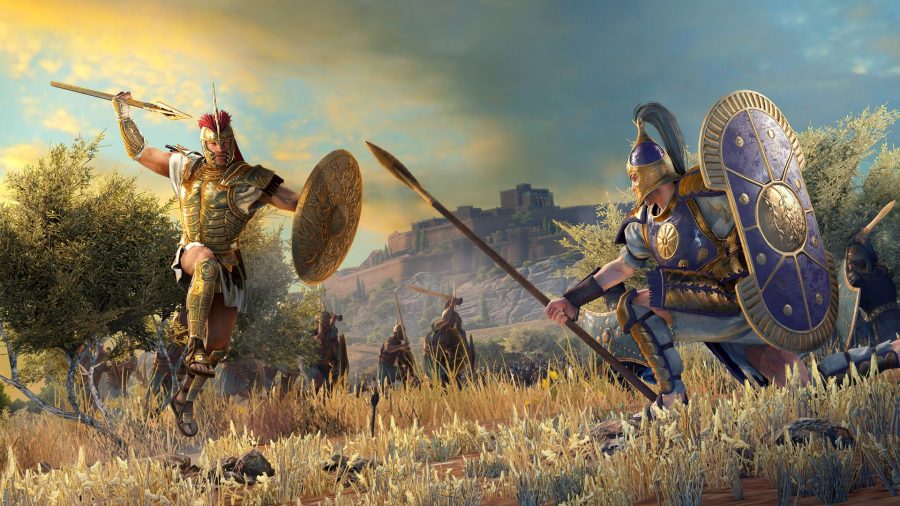 Sounds like a pretty different spin on your usual endgame escalations.

Obviously we wanted an endgame challenge that keeps the game interesting rather than it becoming a grind, and we took a look at every solution in Total War so far, including the map invasion in Warhammer and the realm divide in Shogun 2. And actually, the antagonist escalation sort of resembles the realm divide, only it’s focused around a certain character – most likely from your opposing camp – who becomes the focal point of all opposition against you. And again, we decided to make the AI behaviour a bit more unpredictable, a bit more varied, so you won’t see just endless doomstacks march against your cities, but some more subtle things, I hope [winks].

We saw a duel between heroes in the trailer there – will these fights work similarly to Three Kingdoms or are there differences?

Three Kingdoms’ duel system works very well for Three Kingdoms, which is a great game in itself. But for Troy we decided we needed something else – we’re focusing on the visual side of things, and just showing a sequence of matched combat with heaps of new animations, so the heroes can fight each other in a very cinematic fashion.

That’s more or less the essence of the hero fighting in Troy. There are no duel systems, just heroes fighting each other in matched combat. They’ve got certain abilities they can use – one, for instance, is the challenge, which locks the heroes in combat for a certain length of time. You can use this to prevent an enemy hero from escaping, or just drawing their attention away from your weaker units, but you won’t see such an elaborate, complicated system as in Three Kingdoms.