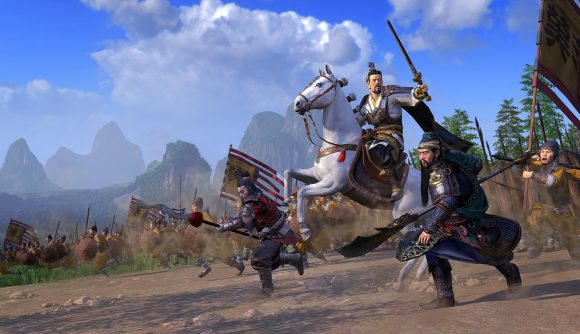 Total War fans are discussing one of the more pivotal changes to Total War games of the past decade. A design shift that appeared in Total War: Rome II moved the strategy game away from single unit armies, to the army-centric approach where every unit had to be in a stack. In theory, this would lead to less stacks roaming the map.

A poll on the Total War subreddit with over 6,000 votes currently swings in favour of bringing back independant unit movement by 60% to 40% keeping things as is, with a small minority voting ‘other’ as a third option. Not a decisive result as, say, which platform redditors are going to buy Warhammer III on, which is notable in and of itself.

Reading through the comments you’ll also see plenty of love for Total War: Three Kingdoms, which attempts to offer the best of both worlds. Important characters can roam around the map with their own personal retinue of up to six units, and a character’s class governs what units they can recruit. Up to three heroes and retinues can stack together into a larger army.

While it had consequences for unit diversity and army flexibility, many feel it’s an appropriate and innovative middle-ground.

Should CA bring back the ability to move units independently from the army as was the case with games before Total War: Rome II? from totalwar

Other interesting points of discussion include taking notes from other games, such as Company of Heroes 3. The WW2 game’s new campaign layer also focuses on armies (or ‘battalions’), but you can recruit individual companies to the map as well. These units can’t initiate tactical battles, but they can capture undefended points on the campaign map, offer support abilities, and deal damage to things at a campaign level.

I’m not sure I have a strong opinion on the subject – some kind of middle-ground is probably what I’d want if I thought about it long enough. Having less army entities to manage is useful, but smaller skirmishes are also just as important as titanic clashes between large armies. Some way of allowing for the strategic distribution of forces outside of mobile armies would be fun, but it would also be very dependent on the era.

We’re not expecting any significant changes to armies in the upcoming Total War: Warhammer III, but siege warfare is due a major overhaul, and we should hear more about that later this month.