Written 1000 years after the events took place, The Romance of the Three Kingdoms tells the story of the collapse of the Han Empire in broad strokes. But far more than that, it’s a story about people: the peasantry of China, long-suffering under corruption, famine and war, but also of the famous warlords and heroes of the time. Master manipulators like Cao Cao who rigged the game, pitting rivals against each other. Idealists like Liu Bei who acted with integrity and mercy, to protect the people. And greedy warlords like Dong Zhuo, who took what he wanted and crushed all who opposed him – or got the mighty Lü Bu to do it, at least.

Though it describes great events, some of which actually happened, the Romance is at its heart a story of characters, and how they found common cause to fight for the future of their country, then soon fell out, violently betraying each other in the name of unity and ambition.

However, the novelisation of these events is far from accurate – collected together over hundreds of years, the Romance represents an epic retelling of the past, popularised by storytellers and dramatic re-enactments, and then supposedly written by Luo Guanzhong. The skeleton for the Romance actually comes from The Records of the Three Kingdoms, which is a historical account written by an official of the time, Chen Shou.

These two different texts are hugely present in Three Kingdom as they make up its two game modes, Record and Romance. The Romance of the Three Kingdoms has risen to be a popular story in Chinese culture, with it not only retelling the collapse of a dynasty over 400 years old, but also relating the fickle nature of fortune. How then did developer Creative Assembly channel such a story, allowing for a unique player experience, while keeping the tale intact? 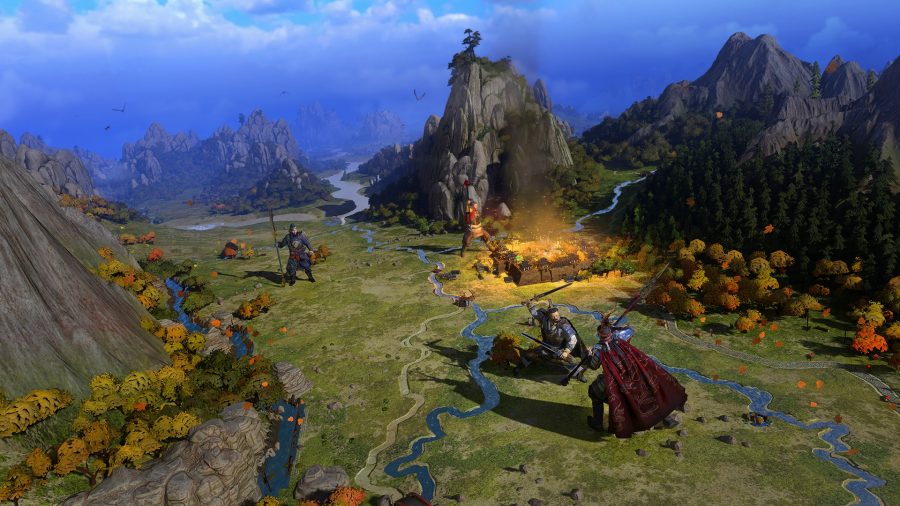 “The fundamental framework of the game allows players to make their own stories,” Total War: Three Kingdoms narrative designer Pete Stewart tells me. “While there are events and dilemmas that definitely occurred in either the Records or the Romance of the Three Kingdoms, we’ve channelled the themes of the period and created our own bevy of events, incidents, and dilemmas that present players with authentic, immersive situations to deal with.”

follow the grain of history, or choose your own path

Three Kingdoms won’t always reflect the exact narrative of the Romance or the Records, but it will present an equivalent narrative – a unique player-driven Romance crafted through decision-making. “There are some dilemmas, especially in the opening stages of a campaign, that do offer players the choice of a specific historical outcome,” Stewart adds. This choice of whether to follow the grain of history, or to choose your own path, is one that combines aspects of both the historical accuracy of the Records, and the epic fantasies of the Romance. But how do these dilemmas occur?

“The campaign is split into several key, but broad, narrative events. As you progress through the ranks, the campaign will change to reflect this,” Stewart explains. “Events like the death of Dong Zhuo, who represents the game’s ‘bad guy’, are marked as important shifting moments. Historically, Dong Zhuo represented someone that had to be stopped, and was a convenient excuse for the warlords to hide their ambition. Players, too, will feel that shift. The further away from the starting position you get, the weaker the power of the Han dynasty becomes and the more the warlords begin to realise that they’re in a better position to usurp the throne.” 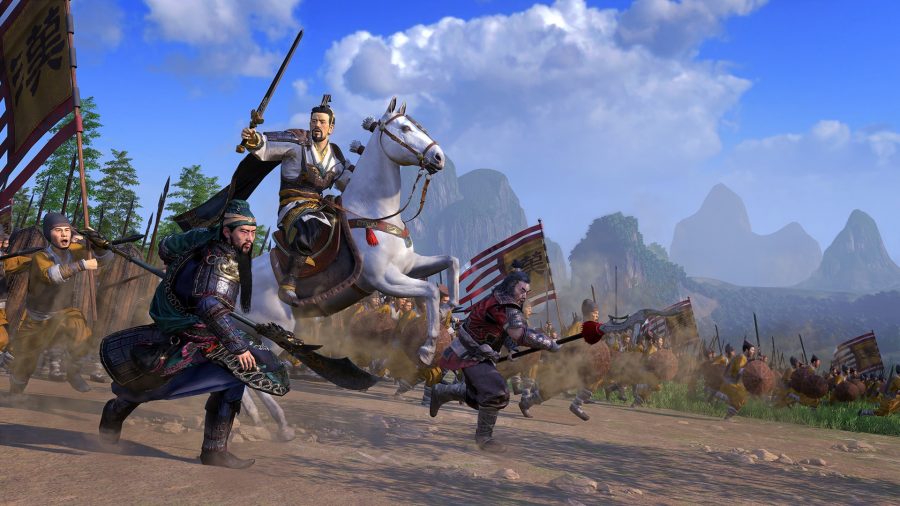 This overall movement of power in Three Kingdoms follows the Romance closely – at first there was the unity of Yuan Shao’s coalition against Dong Zhuo, but after his death, that power vacuum and dissonance causes the coalition to collapse, and the warlords to turn on each other. “This is the broad narrative of the Records and the Romance, and it transfers exactly into the game,” Stewart says.

Want to know more about the big Dong? He literally rules by fear in Three Kingdoms thanks to a unique Intimidation mechanic. It gives him bonuses the more terrified his people are. Find out more about how the fierce tyrant works in the game.

However, the true intricacies of the Romance aren’t found in the broad narrative. They occur through interactions between the unique cast of characters – but not just the major players. “It’s actually hugely daunting just how many characters there are,” Stewart remarks. And he’s right: behind every famous warlord in the Romance there’s a whole host of heroes and villains lending their weight to the story. Fighters like Lü Bu, known for, as Stewart summarises, being both “a legendary turncoat as well as a legendary warrior.” Or Zhuge Liang, the humble master strategist and Daoist magician, who finds in Liu Bei a master deserving of his talents.

“We felt we obviously had to do justice to the more iconic, famous people of the history and romance,” Stewart says. “However, there is the possibility, even the likelihood, that a player will burn through all of those characters – figuratively or literally – in their campaigns. So we do have a system for creating character names and then generating characters that aren’t represented by history.” This ability to create your own legendary heroes is just another way Three Kingdoms gives players the tools “to make their own story.” 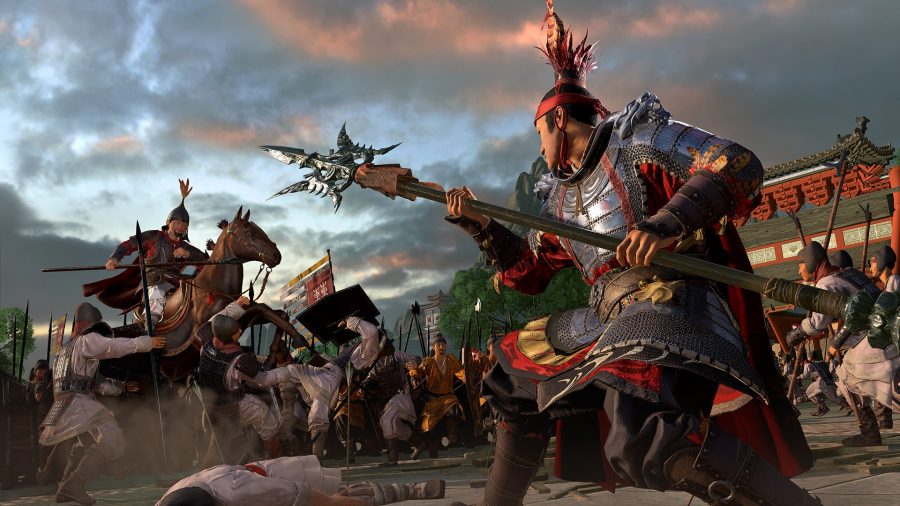 Court politics also play a huge part in the Romance of the Three Kingdoms, so much so it often seems like in ancient China you couldn’t walk down the street without someone stabbing you in the back. It’s a period “rife with intrigue and betrayal, both obvious and subtle,” as Stewart puts it. One of the most famous betrayals is that of big daddy Dong Zhuo himself – a devious minister uses his beautiful daughter to drive a wedge of jealousy between the tyrant and his adopted son Lü Bu. And true to Lü Bu’s impulsive nature, not long after it’s ding dong, Zhuo is dead.

“At least Lü Bu was explicit in his treachery. Others were more… sneaky. And so it is in the game, too,” Stewart says. “Characters who are willing to spy for you get sent directly into other factions as normal characters, waiting to be recruited to positions of authority; generals, administrators, even faction heirs. A spy can lay dormant for years, acting as an otherwise loyal general to their new lord, until you tell them to act.” But Stewart also warns that if a spy gets too comfortable then they may forget the comforts of home and defect to their new masters, so be warned. True to the source, this switching of allegiances occurred frequently during the Three Kingdoms period, so these mechanics are pertinent as well as letting you play around with hatching your r own devious plans.

Related: Become a general in the best strategy games on PC

Total War has always been a game series which plays fast and loose with history. Set within a distinctly historical world, each entry allows you the freedom to set off on a self-determined campaign. But Three Kingdoms is different somehow. The Romance of the Three Kingdoms is a book which reminds us of that very human tendency to romanticise the past, which is something all of us historical Total War fans should understand.

In basing a game not on historical events, but on a romanticised account of historical events, Creative Assembly has made a Total War game that idealises history as much as its fans do. Through its design, it tells a story similar to the Romance, a human tale of conflict, power, and betrayal. But it also allows you to write that story – to forge your own destiny, just as so many famous figures of the Three Kingdoms tried to.