Creative Assembly has revealed how its most murderous faction leader will work in Total War: Three Kingdoms. Dong Zhuo quite literally rules by fear, thanks to a unique Intimidation mechanic that offers him bonuses the more terrified his people are.

Creative Assembly first announced Dong Zhuo’s arrival last month, but this is our first look at how one of China’s fiercest tyrants will actually play when the game launches in a little over two months. The character is deeply unpopular within the game, with a starting situation that sees him at war with nearly everybody on the map. To make up for that, however, he’ll have an impressive starting economy, and will be keen to coerce his unfortunate allies in order to get what he wants.

His faction specialisation is Intimidation. It’s a system central to Dong Zhuo’s reign of terror, but it’ll tick down every turn unless you take action to increase it. You can do that by executing your generals, razing cities to the ground, and generally being a bad egg.

Thanks to Dong Zhuo’s attachment to another faction leader, legendary warrior Lu Bu, it’s not too difficult to cause some significant mischief. You can take a look for yourself in the video below. 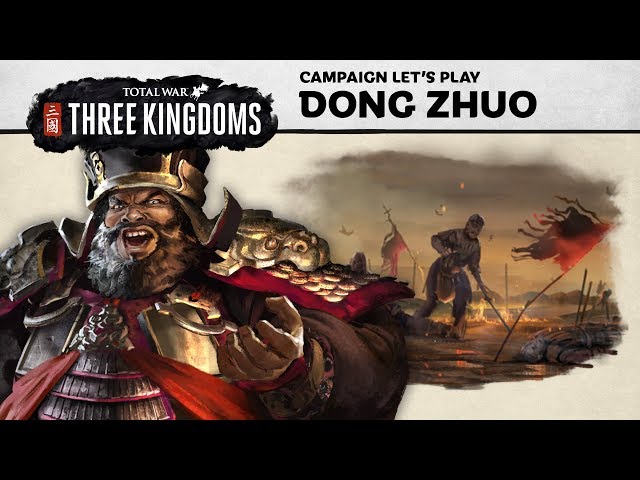 Dong Zhuo won’t be available from the opening of the game. If you want to unlock him, you’ll need to earn the rank of Emperor, or, if that sounds like too much effort, you can simply defeat him in battle.

Sadly, you’ll have a bit of a wait until you can take on China with the dastardly general. The Total War: Three Kingdoms release date was originally slated to be today, March 7, but Creative Assembly recently announced that they’d be pushing that date back – to May 23 – to allow the developer to deliver “the Total War experience you’ve come to expect.”