The king of Mycenae, Agamemnon seeks to build a golden empire – and sees himself ruling over all he surveys. Big brother to the slighted Menelaus, whose wife Helen was taken to Troy by Paris, Agamemnon now embarks upon a mission to enact his kingly justice upon Hector, Paris, and all the Trojans.

Agamemnon’s self importance cost him dearly in legend; after his army incurred the wrath of Artemis, he sacrificed his daughter so that his ships might sail for Troy. Though a formidable warrior, and the commander-in-chief of the Greek forces during the Trojan war, he further weakened his position by offending his greatest fighter Achilles – who then withdrew from battle, putting Agamemnon’s great victory in jeopardy.

Agamemnon has a balanced army roster, some potent and easily managed campaign mechanics, and an easy-rated start position. In our view he vies with Menelaus for one of the easiest campaigns in the game, though his ambitions are certainly not modest – as you take up Agamemnon’s mantle, your ultimate goal is to take Troy and all the glory that comes with it, establishing yourself as the true king of kings.

Through use of your abilities, you’ll promote heroes to positions in court through your ‘King of Men’ ability to bolster their loyalty and give them impressive benefits. You also have the ability to create vassals from your defeated foes and subjects, from whom you may then demand tribute, to further bolster your army and lands. Be careful not to demand too much from your vassals, however, lest they turn on you and you once again incur the wrath of the gods.

Agamemnon’s start position is rated easy. He starts in the centre of Greece, with easy yet defensible access to the Aegean to the east and the Gulf of Corinth to the west. Your initial challenge of protecting your vassal, Troizen, from Tiryns is easy enough, after which you should attack the Corinthians and claim their settlements to unify your home province of Mycenaeca. Pretty much everyone else on mainland Greece is either friendly or neutral towards you, even Achilles, so the only question is what to do next.

Obviously, if you want to play Agamemnon as intended and make use of his unique abilities, you’ll want to vassalise as many minor powers as you can. The trouble with this is you’re obligated to come to their defence if attacked, so choose your vassal targets carefully and be mindful of their disputes – you don’t want to fragment the Greeks when Troy is your ultimate target. Of course, there’s nothing wrong with fighting an old-fashioned war, wiping out the defeated party, and nicking their territory, so you can wade into local disputes as long as you can finish what you start. Indeed, sometimes this will be necessary as you don’t want your vassals to become stronger than you lest they declare their independence, so don’t neglect traditional expansion and army development. 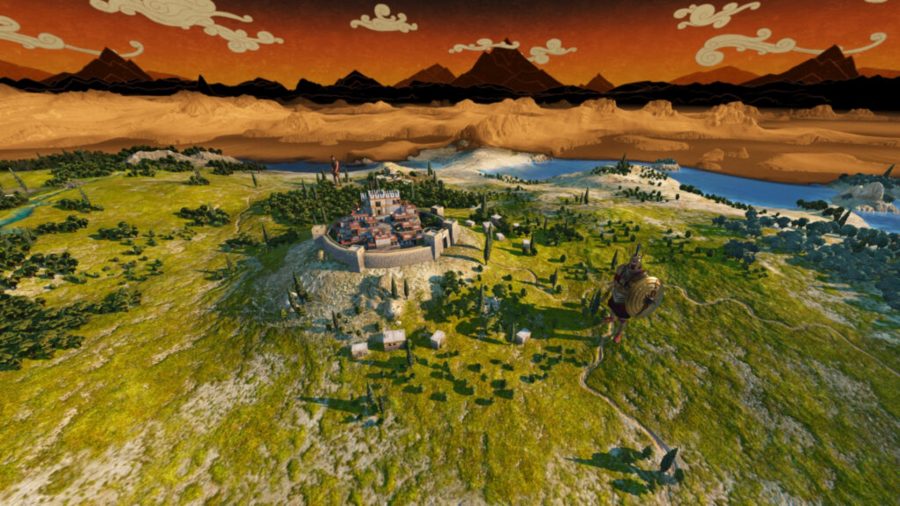 That said, Agamemnon’s abilities to tax and demand tribute from his vassals does mean you can get pretty wealthy without investing too much in your own infrastructure. With Mycenae starting at building tier three and a couple of military buildings, this puts you in a great position to pour resources into Mycenaeca and potentially get to tier five troops before anyone else, which could give you a decisive edge. Be sure to capitalise on it as soon as you can. With Troy, Hector, and Paris all starting the game unfriendly to you, and of course your epic quest leading you to capture the great city, you’ve got an obvious prize to chase in the long term. 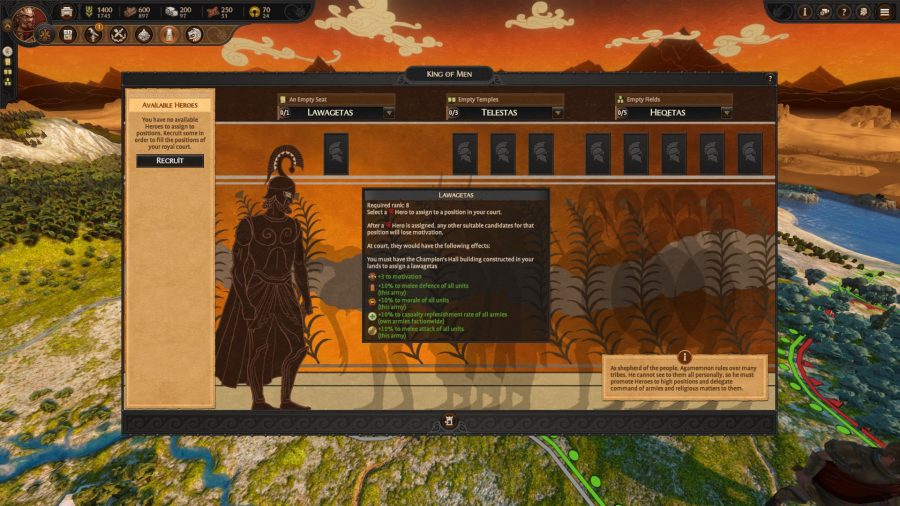 This is a court appointment mechanic – Troy’s Bronze Age version of something we’ve seen in previous TW games, like the Empire’s officers in Warhammer. There’s space for nine appointments at three ranks: one Lawagetas, three Telestas, and five Heqetas. Seats must be filled by heroes, so you’d need nine armies to fill them all! After a hero is assigned, any other candidates that could’ve filled the same position will lose motivation, so appoint them as soon as they become eligible.
Lawagetas requires a rank 8 hero and a Champion’s Hall. It adds +3 motivation, +10% melee defence, attack, and morale to all units in the army, and +10% casualty replenishment to all armies factionwide.
Telestas requires a rank 5 hero. It grants +2 motivation, -1 contraction time to all buildings in the local region, and +5 happiness to the local province.
Heqetas requires a rank 3 hero. It grants +1 to motivation, -10% to recruitment cost of all units in the army, -5% success chance of enemy agent actions against this hero, and +1 local recruitment capacity. 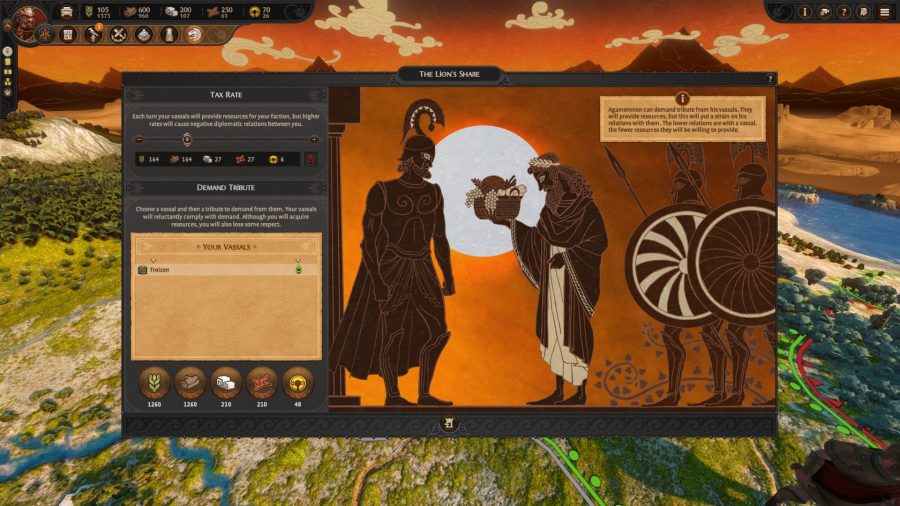 This mechanic enables you to tax your vassals and to demand tribute from them. You start with one vassal – Troizen – but can make others through diplomacy, as in previous games: likelihood of acceptance increases as you’re stronger relative to them (you need to hit a lower threshold than to get them to join your confederation). You get tribute from them each turn, and in return they get your protection, which you must act upon if they’re attacked. They also lose most of their diplomatic freedom, becoming your puppet state.

Tax: you can set the tax rate to demand increasing quantities of food, wood, stone, bronze, and gold per turn, escalating through five tiers. Higher tiers will cause increasingly negative diplomatic results, and may cause some of your vassals to break their vassalage.
Tribute: you can simply highlight a vassal and click any of the five resources to demand a tribute of that currency from them. There’s a fixed quantity of each resource under each button that is the sum you demand.

Agamemnon has the most balanced roster among the Achaeans, with a good mix of good heavy infantry, decent ranged units, and strong chariots, though he can’t recruit fighter heroes. He has three unique units:

That’s all you need to know before embarking upon your quest to capture Troy – one of the many epic stories you can play out, as we explore in our Total War Saga: Troy review. If you’re looking for tips on how to play the other factions, see our Sarpedon guide, Hector guide, Paris guide,  Aeneas guide, Achilles guide, Menelaus guide, and Odysseus guide.