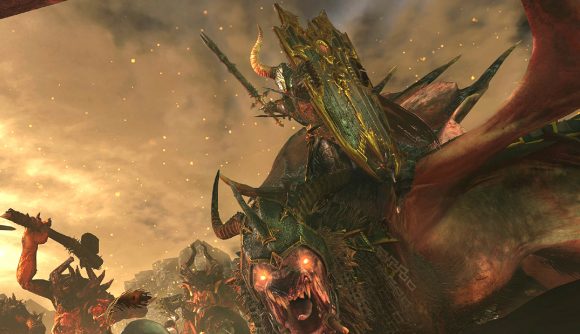 With all the Warhammer III hype and the introduction of four distinct chaos factions, it can be easy to forget about Archaon, the original everchosen of Chaos from Total War: Warhammer and the mortal empires game mode. If you’re worried the iconic Chaos warlord hasn’t been getting much love recently, Total War modder Okoii has come to brighten your day.

Archaon is one of the principal leaders of the Chaos Warriors faction, and is considered a rather grim fellow. You would be, with that much anger and self-entitlement. Now, thanks to this truly cursed Warhammer 2 mod, you can experience a happier Archaon by turning his frown upside down!

Not literally, but Okoii has essentially flipped Archaon’s helmet model a full 180, keeping the eyes in place but causing the glowing recess in his forehead to look like a mouth. While using this mod, Archaon walks about the world in a perpetual state of mild bemusement. The Chaos Warriors are prominent in Warhammer 1 and the mortal empires campaign available in Warhammer 2.

You can check how the mod was made in real-time via this Reddit thread:

I made a Cursed Warhammer 2 Mod from totalwar

Total Warhammer 1’s Chaos Warriors DLC lets you play as Archaon the Everchosen – as well as two other legendary lords – but otherwise you tend to only see him when his ‘doomstacks’ spawn as part of the chaos invasion. Okoii mentions in the mod description that they got the idea from someone on their discord.

We’re not sure if Archaon is going to stick around when Warhammer III shows up – how the third game integrates into the combined map hasn’t been addressed yet. We’re not due to hear anything else on Warhammer III until mid-September, when we’ll finally get a decent look at Cathay.

Don’t forget to check out our other Total War: Warhammer 2 mod picks.