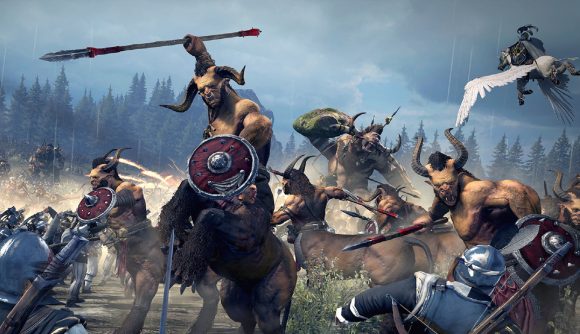 There’s been a recent flurry of updates to the Total War: Warhammer 2 Steam database entry, and players are speculating what could be coming in the final Lords pack. We know that the popular Warhammer game is getting one final DLC pack before the team focuses on the recently announced Warhammer III. Plenty want a Beastmen rework, but plenty more just want to poke fun at the whole idea.

For context, it’s possible to track deploys and tweaks to individual Steam AppIDs via the SteamDB website. Depending on the game in question, one could – up to a point – glean some information.

For example, a recent change to Total War: Three Kingdoms saw a new DLC app ID added with the codename ‘Rosemary’, causing much speculation regarding what the new DLC could be. Previous comments from Creative Assembly have hinted at a Northern Tribes expansion and a new start date after the death of Cao Cao, but so far nothing’s been confirmed. It is believed that the controversial warlord died of some kind of brain tumour, as he often suffered from headaches and dizziness. Rosemary was often used in traditional Chinese medicine as a remedy for such ills.

The current speculation for Warhammer 2 revolves around a recent update to the branch titled ‘Gamesworkshop’, as well as several updates since. User ZahelMighty speculated on Reddit that this could mean we hear something in a couple of weeks, as historically updates to this specific branch have been followed by news announcements of some kind. Meanwhile, the r/totalwar subreddit is awash with Beastmen dunks.

If Beastmen aren’t in the next lord pack; the ENTIRE beastman fanbase will be up in arms!! from totalwar

You may remember earlier in the month we talked about a community poll that revealed not many people claim to actually play the Beastman, with nearly two-thirds of all respondents (over 9,000 at the time of writing) stating they never take the faction out for a spin. Chaos Warriors and the Norsca were the next two neglected races, though the gap between first and second place was quite big.

One reason for this is because the Beastman haven’t had any significant content updates since their original introduction to Total War: Warhammer back in 2016. This is also the reason why many are calling for the neglected man beasts to get some love before Total Warhammer III dominates the show. It may be their last chance.

In the meantime, here’s everything we know about Total War: Warhammer III so far. You can also check out our guide to the confirmed Warhammer 3 races. If you’re still rocking Warhammer 2, there are some excellent mods you should check out.