Poor Beastmen. Not only do they have to live with the fact they are beasts who bear an uncanny resemblance to men, but they also have to suffer nobody wanting to pick them in the Total War: Warhammer strategy games.

Ok, we say “nobody”, what we really mean is around two-thirds of nearly 9,000 people have indicated they don’t play as the Beastman faction. We found this out via a poll that’s currently running on the r/totalwar subreddit where user NickGraddy is attempting to find out not only which race / campaign is the most popular, but also which legendary lord is the most popular for each race. For all of these latter questions, there is an “I don’t play this race” option.

The Beastmen not only have the highest result for this option – 65.7% – but they are also the only race where this option represents over 50% of the results. The next highest race for the ‘I don’t play this race’ category is Norsca at 33.1%, followed closely by Chaos Warriors at 32.9%.

It’s worth pointing out that all three of these races have one thing in common: they are only playable in either the original Total War: Warhammer campaign, a corresponding Total Warhammer 1 DLC mini-campaign, or in the ‘Mortal Empires’ grand campaign available to anyone who owns both Warhammer 1 AND Warhammer 2. 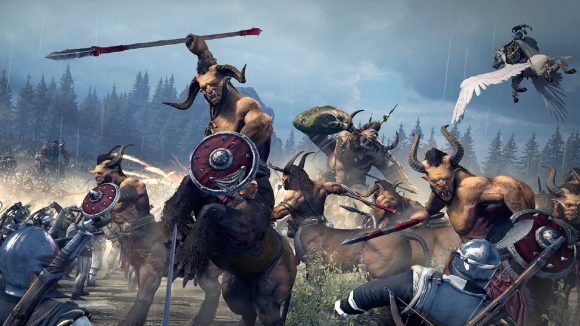 None of these three factions has any dedicated DLC or other content in the main Total War: Warhammer II campaign, which is what most people are playing at the moment.

Still, the numbers for Chaos Warriors and Norsca suggest that plenty of people do still play either Mortal Empires or the original Total Warhammer game, and for Beastmen to be shunned even then is… well, it’s just a bit sad. It probably doesn’t help that they’ve not had much love since their introduction into the first game game back in 2016.

In case you were wondering, there’s no decisive winner for the most popular race / campaign, but the Empire just about pulls ahead with 17.3% of the vote, followed closely by Skaven with 15.6%. It’s unclear if people have voted for the Empire’s Old World/Warhammer 1 campaign, or the mini-campaign introduced in The Hunter and The Beast Warhammer 2 DLC.

Maybe the Beastmen will get some love in Total War: Warhammer III, which is due out later this year. It features Cathy, Kislev, and Chaos Daemons as confirmed races; is available to pre-order now (although we don’t know what the bonus race will be), and got a pretty bad-ass trailer as part of the official announcement last week.