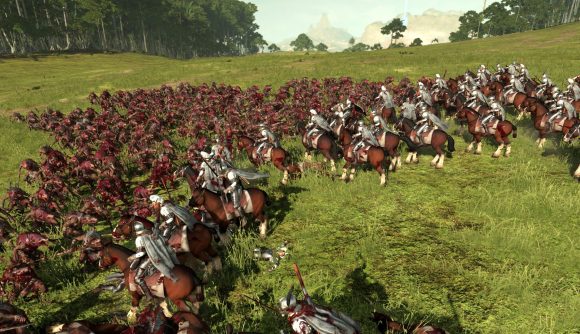 As Total War: Warhammer II gets ready to head off to pasture, one question remains: what’s up with the strategy game’s cavalry? As Joe has reported, the player community has voiced some concerns over the viability of cavalry units vs counter-charging infantry, and it seems Creative Assembly has heard their cries. A new beta branch is available now on Steam that includes some proposed fixes to the formulae that govern these cavalry engagements.

When cavalry charge an infantry formation, Creative Assembly explains, the cavalry unit should be favoured to win, even when the infantry unit reacts and counter-charges. That’s not what’s been happening in Total Warhammer II, however: because there are typically more individual units in an infantry formation, charging cavalry are taking more hits than were intended, while dealing comparatively few of their own.

Creative Assembly has been working on a fix for this, and it’s now available in a beta branch on Steam. Two major changes have been made in this build: firstly, a charge attack will not take place if the unit’s charge path is blocked by a friendly unit. This impacts infantry in particular, because units in back ranks will no longer be able to use charge attacks immediately when the formation’s front ranks are engaged – they’ll have friendly units ahead of them, and thus be blocked.

The second big change is in how collision damage gets calculated on the battlefield. The latest patch notes have the nitty-gritty details if you’re interested, but the key change is that a unit’s charge bonus will no longer be figured into the calculation for collision damage.

Patch 1.12.1 for Total War: WARHAMMER II is live with a beta opt-in for our cavalry fixes.

The way it works now is that a unit’s charge bonus increases its collision damage, and the effect of this was to make it pointless for infantry to brace against a charging cavalry unit – the effect was strong enough that it made little or no difference, and counter-charging was almost always the better move. With this change, bracing should be much more effective, meaning infantry won’t be as likely to YOLO into an attacking cavalry formation.

If you want to try the new cavalry rules out for yourself, just right-click on Total War: Warhammer II in your Steam library and click Properties. In the Betas tab, use the drop-down menu to select the branch labelled warhammerii_cavalry_beta. Close the Properties menu, and your copy of the game should update with the changes applied.