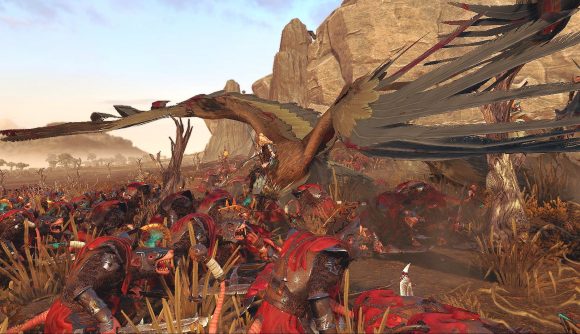 Total War: Warhammer II has a lot of factions now, but there are more of them than players normally have access to – plenty of the ‘less important’ entities you run up against in the fantasy strategy game are strictly meant to be NPCs, with whom you can negotiate with or do battle. But hey, wouldn’t it be fun to take control of some of these? Now you can, thanks to the magic of modding.

It also allows you to command Total War: Warhammer II’s rogue armies, which are nomadic warbands composed of units from various factions that wander around the campaign map looking for a place to settle down and/or steal from someone.

There are unique victory conditions for each unlocked faction, which means you’ll have something to be working towards even as you play a side that was only meant as an AI opponent. If you decide to take control of a rogue army, such as the Abominations or Troll-Skullz for example, you’ll even have a unique tech tree to research.

Juggernaut999 says the mod makes minimal changes to vanilla Total War: Warhammer 2 and should be compatible with just about anything, and that includes the massively popular SFO: Grimhammer II mod.

Head over to the Steam Workshop to subscribe to and download Mega Faction Unlocker. On the page, you’ll also find a link to Juggernaut999’s donations page in case you’d like to toss a tip their way.