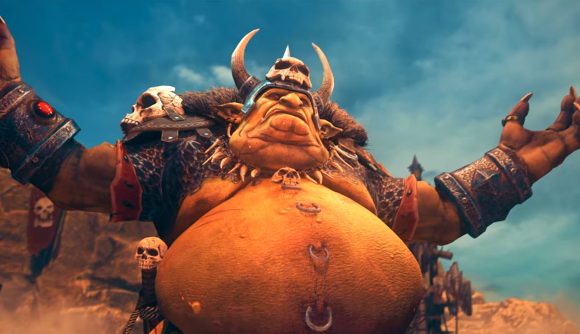 Corpulent goblin warlord Grom the Paunch and humourless (even for an elf) Prince Eltharion will be the stars of the next Total War: Warhammer II DLC.

It will be called The Warden and The Paunch, and feature the two rivals squaring off in a themed confrontational campaign, no doubt with new mechanics for each leader. As is traditional, it will be accompanied by a free patch adding a new Legendary Lord and updating an Old World faction – by process of elimination (and previous hints) the Greenskins will be getting their long-awaited touch up, while Asur fans will be delighted to hear that Prince Imrik of Caledor is the free Lord. He’s a bit more fun than Eltharion, mainly because he rides a dragon rather than a griffin.

The new units include some of the last missing items from both factions’ tabletop rosters – I didn’t see any Lothern Skycutters, but the High Elves are getting War Lions of Chrace, Lion Chariots, and Archmages. The Greenskins are getting Snotling Pump Wagons, and knowledgeable observers of the trailer (below) will also be able to identify those moving lumps of stone as Rogue Idols of Gork (or maybe Mork).

Like Dread Saurians and Necrofex Colossi, Rogue Idols are a rare monster that never got rules in the official Orcs & Goblins book, but instead in the Monstrous Arcanum supplement with a model from Forge World, Games Workshop’s supplier of larger, more advanced miniatures. They should be pretty nasty.

But Rogue Idols aren’t the only obscure units drawn from the depths of the lore. They’re joined by the Arcane Phoenix and the Giant River Troll Hag – a new hero for the Greenskins, and another Forge World creation. 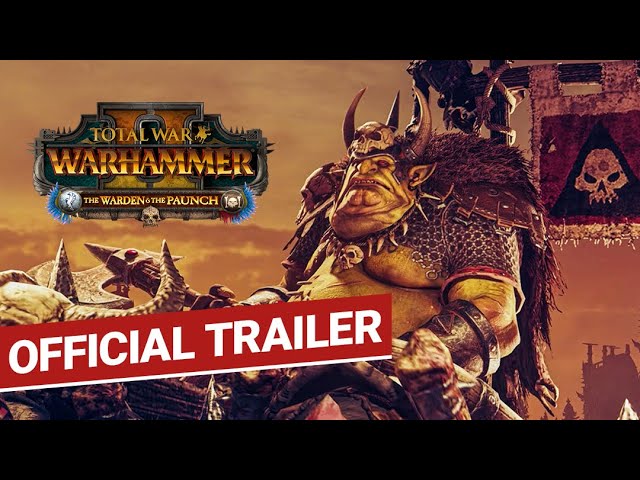 In the lore, Grom the Paunch is the only Greenskin warlord to have successfully invaded the High Elves’ home island of Ulthuan. His invasion was checked by Eltharion ‘the Grim’ at his city of Tor Yvresse in a fight that prompted the dour elven prince to fly off to the Badlands in search of more Greenskins to kill.

Related: Total War: Warhammer 2 is one of the best strategy games

In a press release, developer Creative Assembly says the Greenskin faction update will include “considerable quality of life improvements”, such as tweaks to the Waaagh! mechanic and chariot mounts for characters. For more, check out the Steam page where the DLC is set to cost $8.99 (£6.99), or see the announcement on the Total War blog here. The Warden and the Paunch is due for release on May 21.