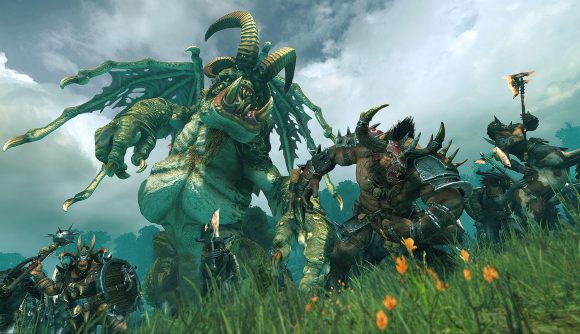 Last week, Creative Assembly revealed that some long-awaited Beastmen units, the Ghorgons and Jabberslythes, were coming to Total War: Warhammer 2 with its final Lords Pack, The Silence and the Fury. Now, we've got a deep dive on the latter, which reveals that the Jabberslythe has got some pretty ferocious anti-infantry abilities, with two dangerous capabilities based around auras and spewing noxious stuff up its sleeves.

In a new blog post giving us a rundown of the big, bad beastie, CA reveals that the Jabberslythe is “an absolute unstoppable beast at doing the thing it does well”, which it seems is charging at waves of infantry (though it'll fare less well against huge monsters like carnosaurs or dragons). The unit's major skills, called Aura of Madness and Spurting Blood-Bile, jointly cause it to deal “constant poison and damage in combat”, as well as additional damage to anything else nearby with low leadership.

Essentially, it'll generate auras and go around “spitting acid blood and vomiting wretched toxins” all over its opponents, and it'll present a challenge to loosely-banded groups of foes that aren't organised into one very powerful unit.

There’s a Regiment of Renown variant of the Jabberslythe called the Vorbergland Broodmother, which dials up these effects further, with her “boiling blood giving her aura armour-sundering properties rather than poison,” as CA explains. This version will be more powerful against enemies like Black Orcs, Chosen, and others kitted out in plate suits. 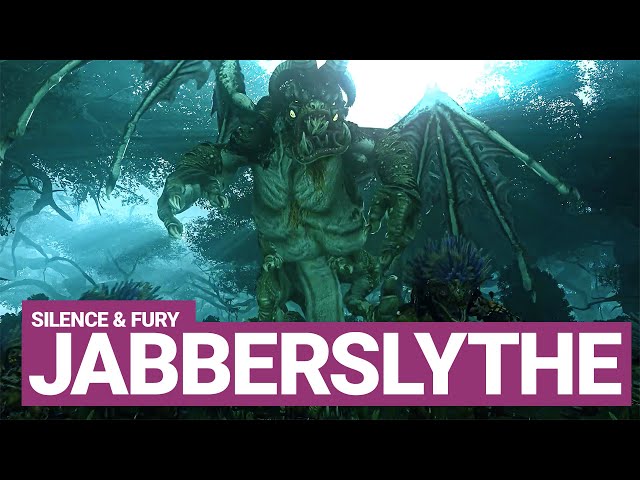 The Jabberslythe has got “a long proboscis tongue, it’s got acid for blood – it’s an amalgamation of many different things slapped together and wrapped up in a horror theming,” Silence and Fury designer Ben Leech says. “You want it to be attacking infantry, just because it can do so much damage in that aura. You can’t really blob it and send all your infantry in to surround it because they’ll all take damage, they’ll all be weaker because of it.”

Get ready for the battle ahead: Pre-order Total Warhammer 3