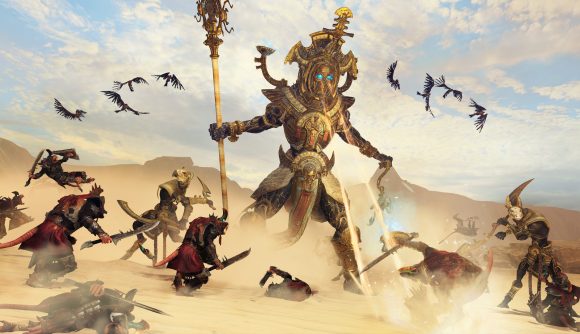 “We’ve created an experimental beta called the Proving Grounds, where we’ve tinkered with various aspects of balancing across all the races, safely away from the main game,” communications manager Al Bickham says in a blog post. “There’ll be some extreme changes, designed to push the limits of our balance understanding, and maybe we’ll find some that players enjoy enough for us to implement in the main game. This beta will run for a limited time, while it continues to generate useful feedback. To be crystal clear, we can’t guarantee that any of the changes in the Proving Grounds will make it into the main game.”

Bickham goes on to clarify that Proving Grounds is not the same as, nor is it a replacement for, a conventional update beta, where everything on the list is intended to go to the live game eventually. Instead, this is just for Creative Assembly to try different things.

The studio says its motivation for making this new testing space is that it has become “an absolute hell-pit abomination to keep everything balanced”. Changing things marginally with each patch “would take a long time to manifest as improvements” and “could easily be undone by the next content release”, the company says, before warning that “changing everything at once is way too risky for the live game”. Hence the Proving Grounds.

The first experiment is live now, bringing some changes to the way the game handles its difficulty scaling and to a bunch of unit types. You can read more here.

If you want to try the new version, you can access it in the ‘betas’ area of the game in your Steam library. You can then revert to the normal, live version of the game if you wish.

Finally, Creative Assembly warns that Proving Grounds is not designed to be compatible with existing saves – start a new one if you want to try out the potential changes.