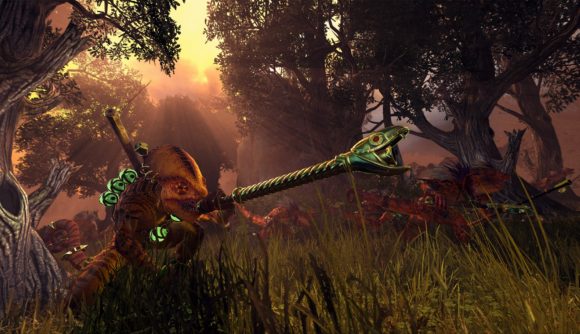 The next – and final – big DLC for Total War: Warhammer II is only days from release, and today we get a look at how the new lizardmen army stacks up against the already revealed Beastmen rework and unit roster. It turns out, the new lizardmen commander has some tricks up his sleeve that will help considerably in evening the odds against the mighty Taurox.

The new lizardmen legendary lord is the chameleon sniper Oxyotl. As the latest Total War blog post explains, Oxyotl is a skink chameleon who has trained himself to be at home in the Realms of Chaos. He’s stealthy both on the battlefield and the campaign map, able to do devastating damage at range without being detected, and capable of teleporting across the map in order to pursue the directives of his Visions of the Old Ones.

These visions inspire missions, and Oxyotl’s campaign is about careful selection of which of these to pursue, since you’ll be getting more of them than the available time allows you to complete. Fortunately, Oxyotl can teleport himself and his army to Visions sites as well as to his capital city and one other player-defined location at will. It’s worth noting that this teleportation ability works in Mortal Empires, too.

A major part of Oxyotl’s army will likely be composed of the new lizardmen infantry unit, the chameleon stalkers. Like Oxyotl, they have battlefield stealth, as well as vanguard deployment. They’re invisible to the enemy until they decide to spring into action, and when they charge into enemy lines, they fire explosive darts that disrupt formations.

The lizardmen also will add the new Skink Oracle hero, which is a magic-user that rides into battle atop a troglodon. A troglodon on its own is bad enough, but add to that a caster with access to a suite of healing and ranged damage spells, and you’ve got a serious battlefield menace on your hands.

Oxyotl seemingly disappears and reappears at will, ending the lives of those unlucky enough to catch his attention…

Take a look at his unique abilities and the units accompanying him on his crusade to rid the world of chaos in our latest blog: https://t.co/LgwLc60Ybx pic.twitter.com/YymRdi6kqB

Of course, that theory is put to the test with the addition of the feral troglodon, which spits poison at range and rips and tears when it’s up close. The feral troglodons are prone to rampaging, and its poison spit gets a bonus against large creatures and can pierce armour.

Rounding out all of this is the coatl, a new lizardmen flying unit that dwarfs the existing flying cavalry on the roster. The coatl is a feathered dragon that grants Stalk on all friendly units marching in its shadow below. It also has a range of powerful spells, has high resistance, pierces armour, and scares the bejeezus out of just about anything that sees it coming.

In addition to teleporting around the map, Oxyotl’s army gets to break additional Total War rules – unlike normal lizardmen, his faction can settle in any climate, and his armies do not take penalties for trespassing in rivals’ territory.

All in all, it looks like we’re in for quite the showdown when the Silence and The Fury DLC launches for the strategy game July 14.