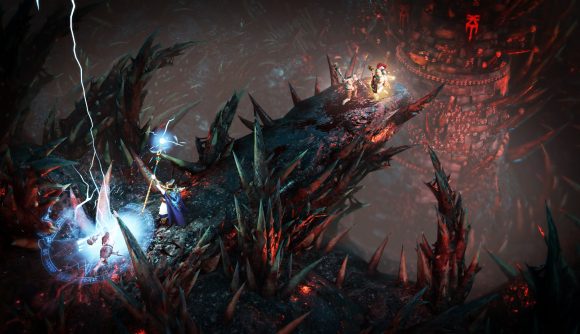 Counter-Strike: Global Offensive might be one of the least Warhammery game on Steam, but there’s Khorne-based action to be found there. You can collect 17 Warhammer 40K-themed weapon stickers in Counter-Strike during the event to use as you see fit.

World of Warships has a slightly more common thread with 40K, what with all the capital ship combat and all, and through June you’ll be able to purchase Imperial and Chaos ship skins, commanders, patches, and flags for your fleets. If you buy the Skulls package this weekend, you can take on a special mission when the main event starts up, and completing that mission will earn you containers full of Warhammer 40K gubbins for your warships.

That’s just the beginning, however. The real meat of the event is taking place in the officially licensed Warhammer games themselves. Chances are, if it’s a Warhammer game on Steam, there’s something going on this month to encourage you to play it, buy it, or both.

For instance, Total War: Warhammer II is offering a new Black Orc Big Boss free for anyone who starts up a Greenskins campaign. The base game is also marked down 66% off its normal price, putting it at $20.39 USD / £13.59.

Added as part of a free update to WARHAMMER II for this year’s Skulls for the Skull Throne event, the Black Orc Big Boss is the biggest, baddest Orc the Greenskins have to offer, second only to the Warboss in size and temperament. pic.twitter.com/RYImgvbui9

You can’t play Necromunda: Underhive Wars yet – it’s not out until sometime this summer. However, you can pre-order it at a special discount during Skulls for the Skull Throne, which has it 20% off the list price. That’s $31.99 / £27.99.

The list goes on and on – seriously, there’s something for just about every Warhammer title that’s come out in the past five years at least, with new skins and discounts on Space Hulk: Deathwing and Space Hulk: Tactics, a painting collection event in Vermintide 2, a Crown of Command and Blunderbuss Grenade Launcher for Man ‘O War: Corsair, and new skins for Dark Future: Blood Red States.

That’s only a taste of what’s going on during Skulls for the Skull Throne this year – check out this post at Warhammer Community for the full rundown.