I used to hate the Hell Pit Abomination. When it was first released in tabletop Warhammer’s seventh edition, I thought I had never seen an uglier, more pointless blancmange of a model. It’s just a lump. Like if someone had blown their nose into a handkerchief and scaled-up the issue.

But I have a new appreciation for my least-favourite unit in my least-favourite Warhammer race. After speaking with Total War: Warhammer’s artists and animators about just how difficult it was to breathe life into a sack of anaemic snot, I can’t help but respect the skill and craft it took. Only ballpark estimates are possible, but I’m told there were two animators working on the Hell Pit Abomination for a “couple of months.”

But that’s animation, and before you can make a Hell Pit Abomination move, there are more fundamental questions: how can it move, and how should it move? This is a creature that has only the most tenuous relationship with anything in reality: in the lore, Abominations begin life as blind, tunnel-dwelling worms, captured by the demented Frankensteins of Clan Moulder, who then subject them to a series of mutative experiments. This raises many questions for character artists, who have to create a model that makes some vague anatomical sense so that it can be rigged.

To get a sense of how difficult it was to create the Hell Pit Abomination, Baj Singh, lead character artist, references the game’s Griffins. He tells me that bringing these to life was tricky enough, and with those models the art team at least got to start with a basis in reality – a lion and bird wings.

“If you’ve got a Hell Pit Abomination, well, where do you even start? Nothing in real life looks like that!” Singh says. “So you’ve got to draw the line between where you follow realistic anatomy, and where you blend it with imagination. That can be difficult to get people’s heads around, especially if all you’ve made are samurai.”

Looking at nature can only get you so far. With other creatures, “you’ve got a reference to an existing creature,” art director Greg Alston says. “With a Hell Pit Abomination, you have to go in a few unusual ways. We started looking at disabled animals, like dogs that had been injured or paralysed and have had to use a wheelchair, because the Abomination has got a big wheel on the back. We even looked at zombies – those classic ones where they only have half a body, and you see them using their front arms to just drag themselves along.”

If you walk past the art team’s desk at Creative Assembly you will see a lot of macabre horror movie paraphernalia. It’s all used to inform the design of the more unusual entities like the Hell Pit Abomination. But it’s only the foundations, a baseline for them to work from, as the differences in producing creatures for a film and for a game provide their biggest challenges. “Games impose limitations which film, say, does not, because everything is pre-rendered,” Singh says. “There’s a lot of ‘let’s see how this is going to work’ – how fast it can attack, for instance – and that’s got a knock on design as well. All these things affect each other.”

Here’s something to think about: the team has to consider what every limb is doing in every frame of every one of the Hell Pit Abomination’s animations. “The Hell Pit is probably the most complex rig of them all, because of the number of limbs,” Alston says. “So it took the longest because the animator has to constantly manage all those. You can be moving one part of the body, and then it just completely breaks the shape [of the rest of the model]. You need to make sure the shape reads constantly. With the Hell Pit, it’s like ‘what if I do this?’ and suddenly it just looks completely wrong.”

"Look at something like the Hell Pit, or the two-headed Chaos Dragon," lead character artist Baj Singh explains. "How do you take something that traditionally has one head, and split it so that it has two? Now you’ve got to have two sets of trapeziuses, you’ve got to get your lats coming in in different ways, you’ve got to take all of that into consideration.”

I want to get to the bottom of how much work goes into this, so let’s start with the limbs. How many does it have? The group laughs and exchanges glances as they collectively count – or guess. “Well, it does have a giant wheel at the back,” Alston says. “Isn’t it like, seven or eight?” chips in Singh. Lead technical animator Lee Dunham ought to know best: he confirms there are seven or eight primary limbs, “and then we’ve got a few secondary ones in there. Then the wheel, then the tail. You’ve got two sets of spines – one for the body, one for the upper body, additional arms, seven little heads on top, and then the main [head].”

The point is that it’s a lot of limbs. Assuming they’re all arranged on a skeleton with something approaching sense, how it can move is settled, then. So how should it move? The creature’s more abstract qualities are an important starting point: its personality, its emotional state – its soul, if you’re feeling fanciful. The Abomination is an affront to anything natural, covered in limbs that may not work, and that it may not even know how to use. So the thinking was that “it’s fighting itself, it can’t control its body, and it’s probably in complete agony, too,” Alston says. “So you want to get across that emotion, you want to suggest something’s painful – maybe there’s a scream – and it’s in a constant state of rage.” 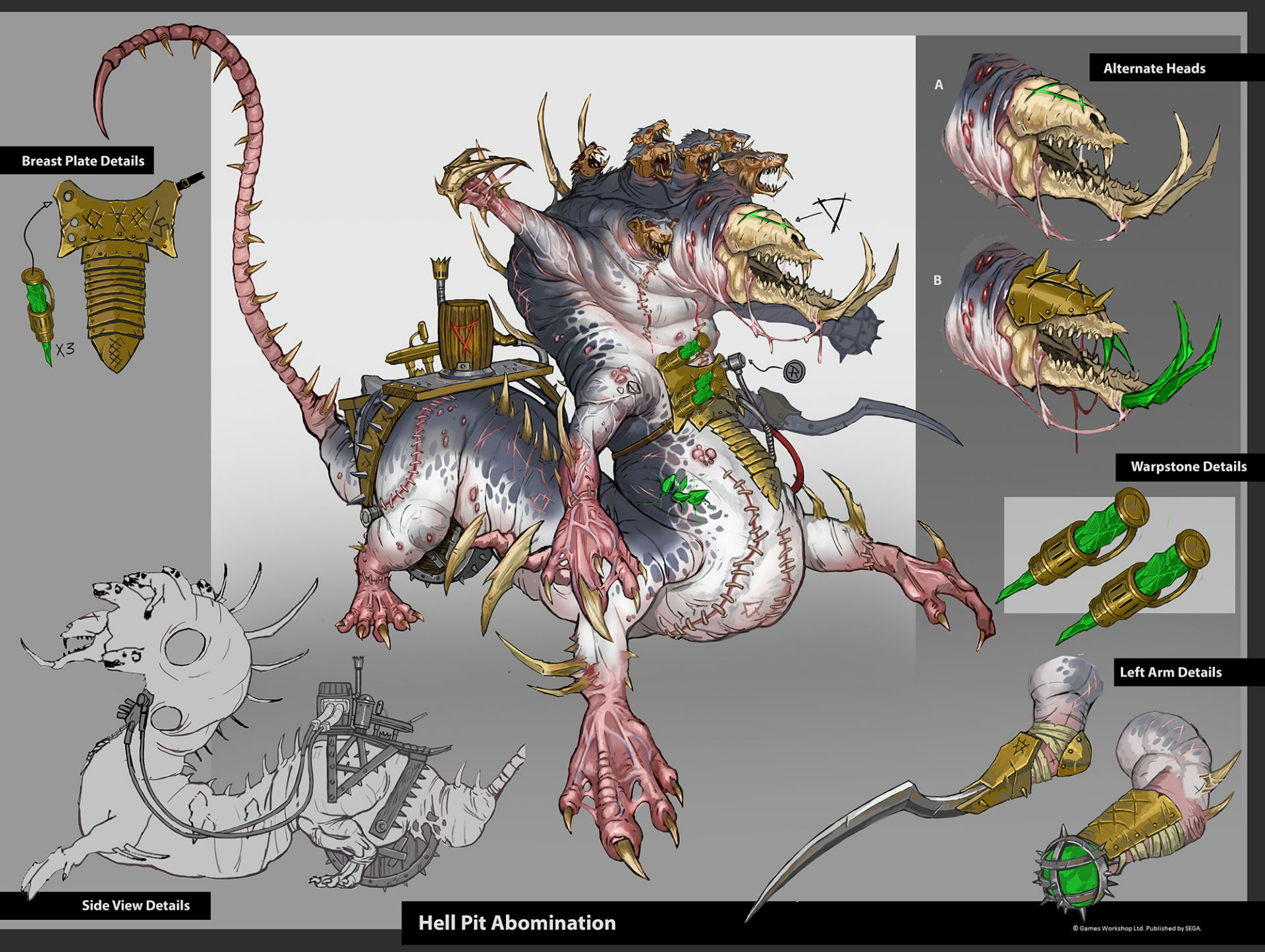 Discussions of how any of Warhammer’s creatures should behave are also informed by Warhammer lore, of which Creative Assembly’s treatment has been consistently reverential. “After talking with each other, animators have a [shared] design doc where they’ll put information about the lore around the character – anything we can find online – which helps them get into the mind of what they should convey,” Alston tells me. “Then they start bouncing ideas off each other: does this fit what it should do? Does it convey what we imagine it to convey?”

An affront to anything natural, the Abomination is covered in limbs that may not work

There’s plenty of material, Alston observes – “the great thing with Games Workshop is you’ve got so much history that it’s almost like doing another history game. All the [Warhammer] army books are just full of the history of these characters, so the animators will just go straight from reading from those kind of things.” 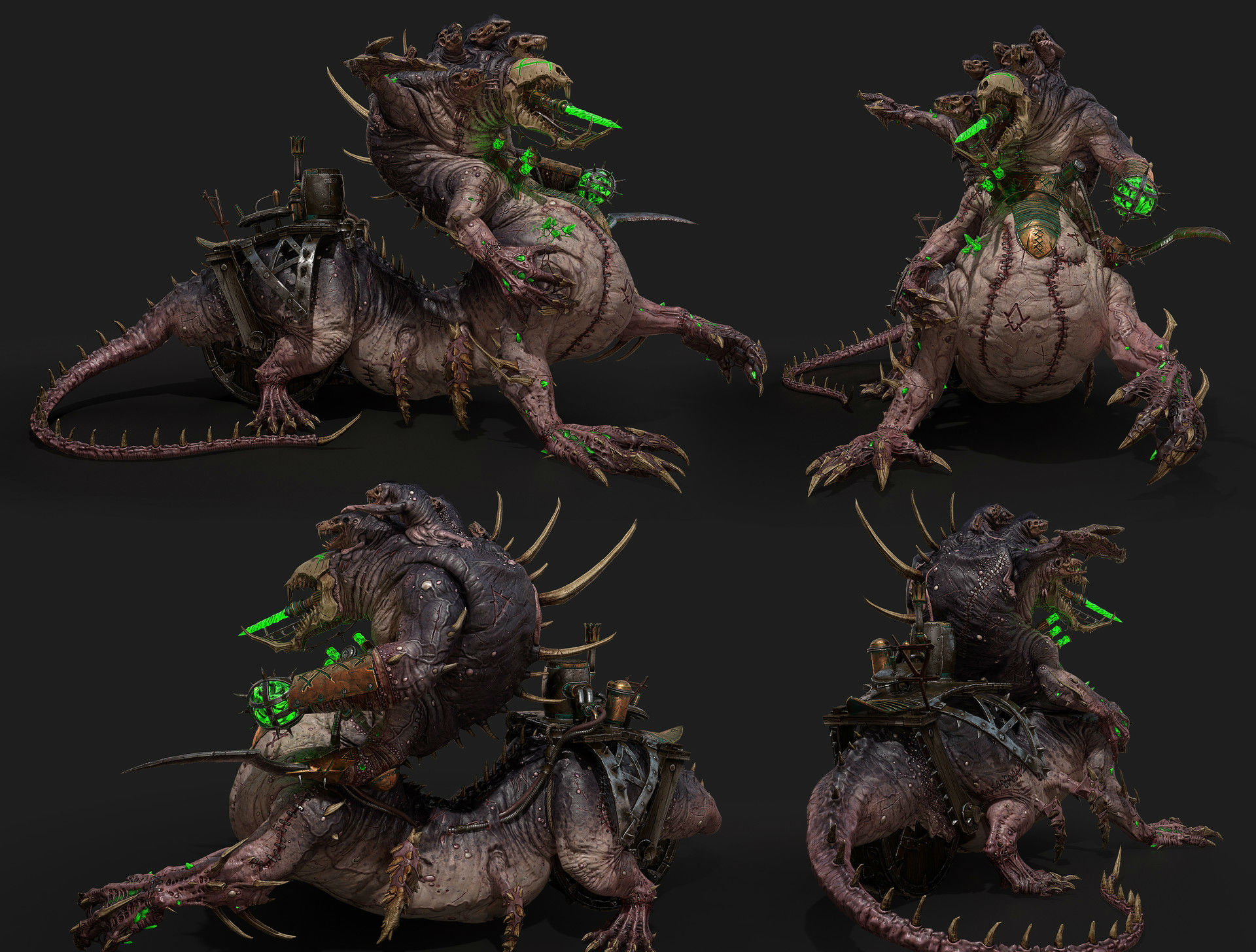 Referring to epic fantasy movies, Alston says “we want to create that cinematic moment, and we found Warhammer I was missing those. When we had, say, a giant fighting infantry, that was good, but then when you had two giants [fighting each other], it would lose that cinematic feel. They would just play the same club animation, just whacking their toes. It was a bit underwhelming. So we tried to round that up before Warhammer II, but it took a lot of effort, because it’s a long process to do a match-off animation between this character and that character there. It varies, but you’re talking at least one to two weeks of one animator to animate a set-piece like that.”

There’s an honourable mention for flying units, but there’ is consensus that the Hell Pit Abomination was the hardest unit in the game to make. “Certainly from an animation perspective, it’s going to be the Hell Pit,” Dunham says. “It’s just a mound of limbs!”

It has taken great dedication to impart that liveliness to the Hell Pit Abomination. It’s still a blob of a model, but you try creating the logic by which a blob moves, fights, and breathes. The Hell Pit Abomination is a patently absurd creature, but watch it move in Total War: Warhammer, and you can almost believe that it exists – if in some far-flung, terrifying universe. That’s one hell of an achievement.