With barely three months left in 2018 and Total War: Warhammer II’s next race confirmed for this year, it’s time for some teases. Creative Assembly has provided said teases in its latest development update, but they’re thin and ambiguous (deliberately, I’m sure). Attempting to draw any definitive conclusions about the next race from them is daft. Which is why the internet has been doing so with vigour. The frontrunners: Halflings and Dogs of War.

As ever, the ‘what the teams are working on’ blog gives a short summary of each team’s status, with the fantasy new content team one of the sparsest. Their update, in its entirety, is:

“We still don’t have a lot we can say publicly about the Warhammer II campaign pack we’re currently working on (sorry, guys!), but we will say that aren’t that many moons to go now.

“The team are definitely proving they’re well worth their salt, and the art department is cooking up something quite unlike anything you’ve seen in a Total War: Warhammer game before.”

There are one or two words there that ought to leap at you, especially if you’ve been following CA’s not-so-subtle teases before (re Warhammer III: “it’s absolute Chaos“). This one’s a lot harder to decipher, however. When I first read the reference to ‘cooking’ I thought of halflings, who love food in Warhammer as much as they do in Lord of the Rings – one of the tabletop game’s only official halfling units was a catapult that fired pots of boiling stew.

Warhammer’s halflings live in the Moot, a region of the Empire, and though they never got an official book, they did get a semi-official army list in an old issue of White Dwarf. There’s definitely something for Creative Assembly to use.

As a common seasoning, ‘salt’ doesn’t not fit the gastronomic halflings, but many in the Total War forums and subreddit have pointed out that ‘salt’ is nautical slang, and that Sartosa, the pirate capital of the Warhammer world, was recently added to the Mortal Empires campaign map. Sartosa, unlike the Moot, is also on Total War: Warhammer II’s Vortex map. Thus, any faction that could use Sartosa as a start position would also have a presence in both modes of Total War: Warhammer II. 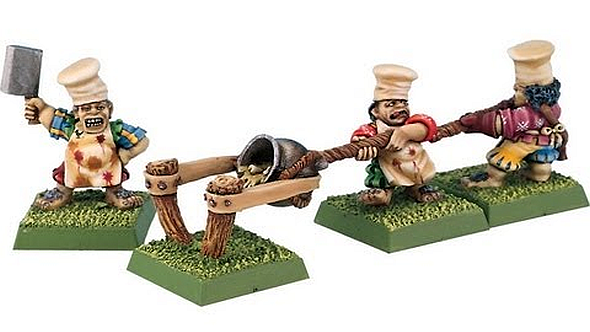 One such faction are the Dogs of War, who received an official army book in the tabletop game’s fifth edition but were quickly forgotten. They were a mercenary army drawn mainly from the minor nations of Estalia and Tilea, but with unique ‘Regiments of Renown’ from all over the Warhammer world, including hobgoblin wolf riders from the far east, Lizardmen skink cavalry, and even an exiled High Elf, Asarnil the Dragonlord. We should also mention Lumpin Croop’s Fighting Cocks, a regiment of mercenary halfling archers. Wishful thinking, but perhaps Creative Assembly will somehow give us two-for-one.

Total War: Warhammer II has had two pieces of major DLC so far, with only January’s Tomb Kings adding an entirely new race. The next DLC is confirmed to be a ‘campaign pack’ – meaning a new race with four new Legendary Lords – and is confirmed to release sometime this year.

You can read the latest from CA here. There is news for several other Total War games, including balance tweaks and new cosmetics coming to Arena, the launch of the Thrones of Britannia assembly kit, and a development update from Three Kingdoms.