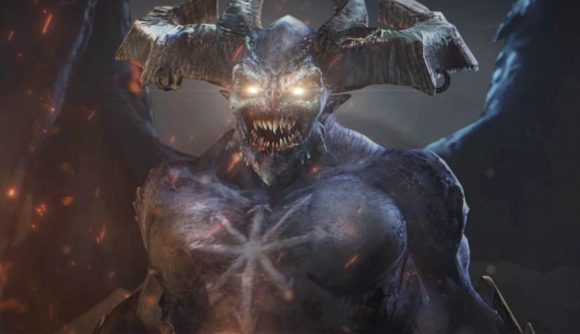 Creative Assembly has revealed that the big bad of Total War: Warhammer III is none other than the daemon prince Be’lakor. What’s more, he’s being voiced by Richard Armitage, whose gravelly tones you might recognise as belonging to the actor behind Thorin Oakenshield in The Hobbit trilogy.

“We wanted him as a villain because that’s his role in Warhammer,” Creative Assembly principal writer Andy Hall says. “Whether it’s from Mordheim or even The End Times, he plays this role as a villain, and why he’s so ideal for that role is that the Chaos Gods hate him, and the goodies certainly aren’t friends with him either. He can do stuff that will affect everyone, and everyone’s going to try and stop him.”

Hall goes on to say that the team knew they wanted to use Be’lakor reasonably early into the design process, particularly praising his suitability for a climatic boss battle. “He’s a classic villain full of plots and machinations, but he’s also a big, hulking daemon creature as well,” he tells us. “So he could fulfil that role as being a bit of muscle, but being very intelligent with it as well.”

Creative Assembly stops short of confirming whether or not Be’lakor will be playable, though Hall teases that he’s sure the team will “get to that place”, and that “you may or may not be able to play him at some point during Warhammer III. We’ll kind of let players discover that for themselves.” Game director Ian Roxburgh adds that the team might look into doing more things with Be’lakor after release, too.

The big bad isn’t all we spoke to the Total War: Warhammer III devs about, though. We also learned that the strategy game will feature multiplayer co-op campaigns of up to eight players and what The Great Maw looks like. Keep an eye out for the full Total Warhammer III interview on the website soon.