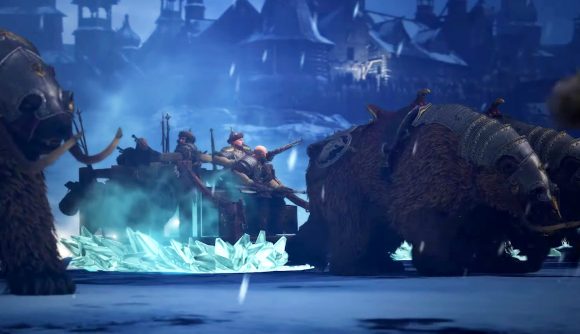 Why bother with pointless frippery like wheels when you’ve got a massive ornery bear population right on hand? That’s the philosophy Total War: Warhammer III’s Kislev faction takes to the strategy game’s battlefields anyway, and you can see it in action in the latest unit reveal, which shows off the Kislevite War Sleds. They’re big sleighs full of angry lads with guns, and they’re each powered by two large armoured bears.

The sleds come in ‘light’ and ‘heavy’ variants, although we reckon it’s probably a distinction that makes very little difference from the perspective of the infantry they’re meant to trample. If a unit is somehow left standing after the sleds’ initial charge, there’s still a follow-on volley of gunfire to worry about.

The war sleds feature similar feathered structures to the Kislev winged lancers Creative Assembly revealed last week, and the heavy sleds are crafted from what look like timber beams clad in steel scales. The bears are yoked by high arch structures, which gives them room to move around and do bear things to any Chaos units in front of them.

Ice and guns and bears, oh my!

The fearsome Kislev War Sleds crash into their foes and finish the job with firepower.

You see one of these coming, you’d best get out of the way 🐻 pic.twitter.com/D8b8KU9RHW

The only bits we’re unsure about are the ice crystals beneath the sleds: they look a bit too neon and static, and they don’t really convey the sense of a sled moving across a frozen lake surface or tundra.

But on balance, these look like they’ll be highly entertaining units to field when the Total War: Warhammer III release date rolls around later on this year.