In the last edition or two of its tabletop game (before it was killed and reborn as Age of Sigmar), most Warhammer Fantasy races got a ‘centrepiece’ monster. The Hell Pit Abomination, the Arachnarok Spider, the Mortis Engine/Coven Throne; these were the belles of the bestial balls. Standing head, shoulders, and often knees above other units, they were the pride of every wargamer’s collection, and their digital equivalents sit in similar glory at the top of Total War: Warhammer’s tech trees. But with Total War: Warhammer III still to come, they will soon be joined by fresh horrors.

Developer Creative Assembly has treated the unveiling of each such centrepiece with the same reverence as a tabletop gamer laying it out on the field for their friends to coo over. We’ve seen it with the Hierotitan, lumbering through the dust to burn Dark Elves with its laser eyes, the Hell Pit Abomination punching out a Black Dragon, the Necrofex Colossus blasting swordsmen with its cannon-arm, and most recently with the Dread Saurian terrorising an Empire expedition in the trailer for the Hunter and the Beast DLC.

This sets a precedent that we can follow: what other centrepiece monsters could we see revealed in the future of Total War: Warhammer? In the forests and mountains of the Old World, the jungles and caves of the New, and the realm of Chaos, many more monsters stir, sensing their time drawing near. These are the monsters we expect to see in Total War: Warhammer III (along with a few that we simply want to see).

A previous version of this article correctly guessed the Dread Saurian’s arrival, so based on our form, all of these are definitely confirmed to be coming to the series (disclaimer: in no way is that true).

Everything is bigger in the Mountains of Mourn – the people, the giants, the appetites, even the wildlife. The Ogre Kingdoms that dwell there are one of the two eighth edition core races that have yet to make it into the Total Warhammer series, so they’re certain to be a high priority in Warhammer III – and likely a launch race. Of all the local terrors the ogres can tame, there are two that we will undoubtedly see: the Thundertusk and the Stonehorn.

The Thundertusk is essentially a bigger and better mammoth, and Total War: Warhammer already has those. All eyes should be on the Stonehorn, then, as it’s a sabre-toothed mountain of rock and muscle, akin to nothing we’ve seen in the videogame series so far.

Often referred to as ‘a living fossil’ due to the density of matter that comprises its colossal mass, Stonehorns will ‘take any opportunity to headbutt something to death’. Only the hardiest Ogre Hunters can tame them. Far more end up as trampled gore on the mountainside. 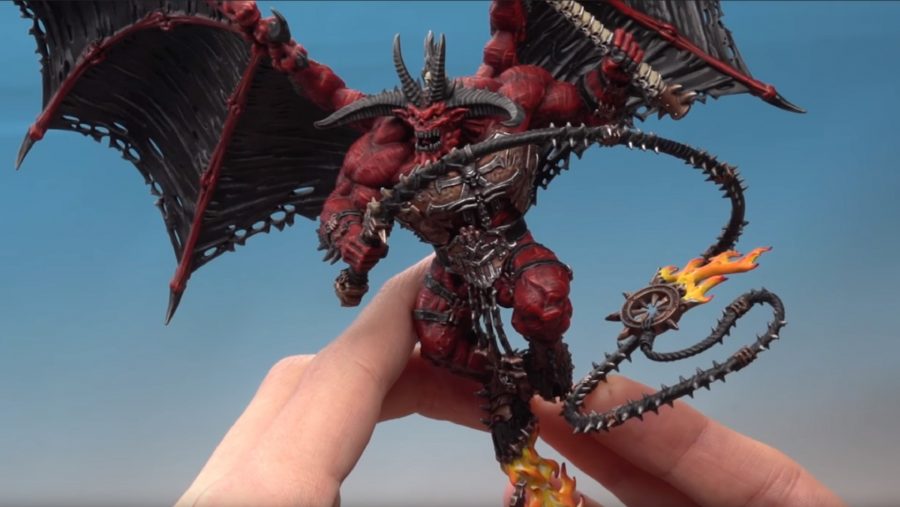 Centrepiece monsters are impressive but let's not forget that centrepiece artillery can also be a thing. If Queen Bess in the Vampire Coast is anything to go by, we can likely expect massive Chaos Dwarf artillery pieces - whether that’s the Magma Cannon, or the colossal unit-killing, Dreadquake Mortar.

Look anywhere in the vast pantheon that is the combined roster of the Warriors and Daemons of Chaos, and you’ll see a monster that could serve as an icon on every other page. But few will equal a Bloodthirster.

Known as Lords of Skulls, Drinkers of Blood, or Guardians of the Throne, these Greater Daemons of Khorne – mightiest of the Chaos gods – act as both his servants and his greatest daemonic warriors. They’re winged, horned giants that tower above the battlefield, clad in thick plate, wielding axes and whips as they reap unfathomable destruction – all in a futile attempt to sate their endless bloodlust.

The Daemons of Chaos are the other core race that are yet to be fully represented in the series, and it’s been hinted that they’ll appear in Warhammer III (“later on in the trilogy, you will be exposed to the full horrors of the Realm of Chaos“.) Who knows how they will manifest – to judge by their lore, Chaos Daemons should present a big challenge for CA’s designers – but when they do, expect Bloodthirsters to join Great Unclean Ones, Lords of Change, and Keepers of Secrets as some of the mightiest monsters on the battlefield.

Imagine a Balrog made of iron and you won’t be far off. A K’daii Destroyer is a war machine borne of the dark ingenuity of the Chaos Dwarfs, and possessed by a fire spirit of immense power. These huge constructs, forged in the Dark Lands and brought to life with mass blood sacrifice, are a danger even to their own troops. This is why they must be kept as ‘cold and silent metal’ until let loose on the battlefield, where ‘they burn bright and terrible, but briefly’.

Creative Assembly has said that all 15 core eighth edition races will eventually make it into the series, meaning the Ogres and Daemons are guaranteed to feature in Total War: Warhammer III. Of all the other races in Warhammer lore, the Chaos Dwarfs are perhaps the most prominent: they had an official supplement army book in fifth edition, they canonically occupy a vast swathe of land between the Old World and the Ogres’ homeland, and their army list and lore are both well-developed. Given that Norsca and the Vampire Coast are in the videogame, we’re certain the Chaos Dwarfs will get their turn at some point.

And when they do, the Destroyer is a frontrunner for the Chaos Dwarfs’ mega-monster, alongside the Bale Taurus. But, unlike the Taurus, the Destroyer never received an official model, and was only ever vaguely pictured in the Monstrous Arcanum. The same was true for the Vampire Coast’s Necrofex Colossus, however, and that got into the game as Warhammer licensors Games Workshop gave Creative Assembly permission to get, er, creative. 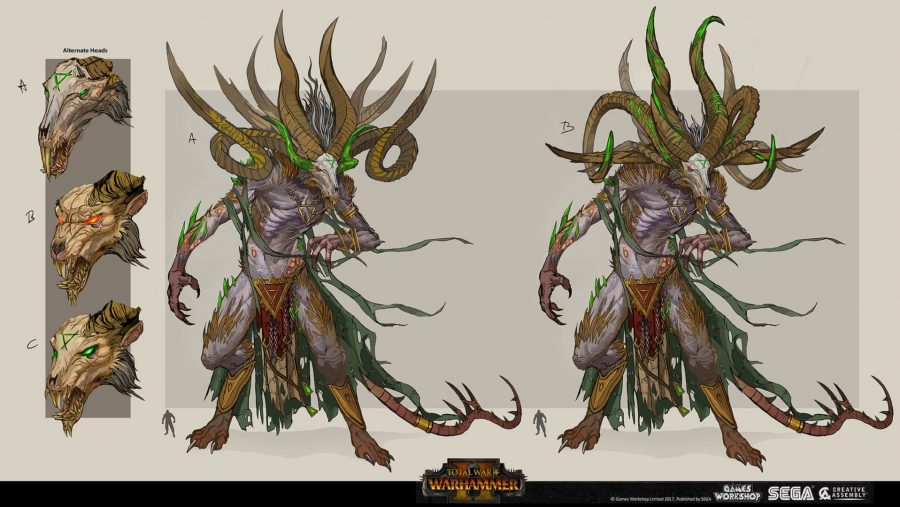 While the ratmen of Clan Moulder have cooked up all manner of powerful monstrosities, none even come close to the power of the Verminlords. These arch-daemons are manifestations of the Skaven deity, the Horned

they’re quick and deadly, even capable of squaring up to other Greater Daemons

Rat, and as such represent all that is most celebrated by rat-kind. While huge in stature, they’re quick and deadly on the battlefield, even capable of squaring up to Greater Daemons.

These harbingers of ruin also act as patrons for the Skaven clans and as such come in four main varieties: Deceivers for the assassin clans, Corruptors for the plague-bearers, Warbringers for the warlord clans, and Warpseers for the warlock engineers. At the head of all this is Skreech Verminking, Lord of Verminlords, who some fans think has already appeared as ‘The Screaming One’ during the Skaven’s first ritual cinematic of the Great Vortex campaign.

Just like the first two games (and every other Total War of the modern era),  Warhammer III is certain to get a healthy serving of post-launch DLC. While the focus will surely be on campaign and Lord packs for the new races, Creative Assembly has shown with Warhammer II’s content cycle that it doesn’t neglect past ones. With Chaos Daemons certain to enter the game, we can totally envisage the Skaven getting theirs – perhaps even as some apocalyptic event to conclude the series, just as the End Times killed off the tabletop setting?

Just as long as we’re discussing older races, ever since Call of the Beastmen released back in 2016, fans who felt the Cygor didn’t quite scratch that big monster itch have been asking for the Ghorgon.

Imagine a minotaur so flesh-drunk it has mutated into the size of a Giant, sporting two extra arms and an insatiable hunger for meat. The Ghorgon is Beastmen ideology made manifest – that ideology chiefly being CHARGE, THEN EAT, YES?! A Ghorgon can consume an entire Beastmen tribe in a single night.

There is, however, a slight possibility we’ll get a Preyton instead, which is essentially a fiend from The Witcher 3 with wings. That, or the Jabberslythe, which is a tasty combo of toad, insect, and dragon. Creative Assembly has shown willing to fill holes in older rosters with surprise additions such as the Tomb Kings’ Bone Giant and the Dwarfs’ Giant Slayers, so there’s every chance that Beastmen fans will finally see their wishes answered during Warhammer III’s life-cycle. 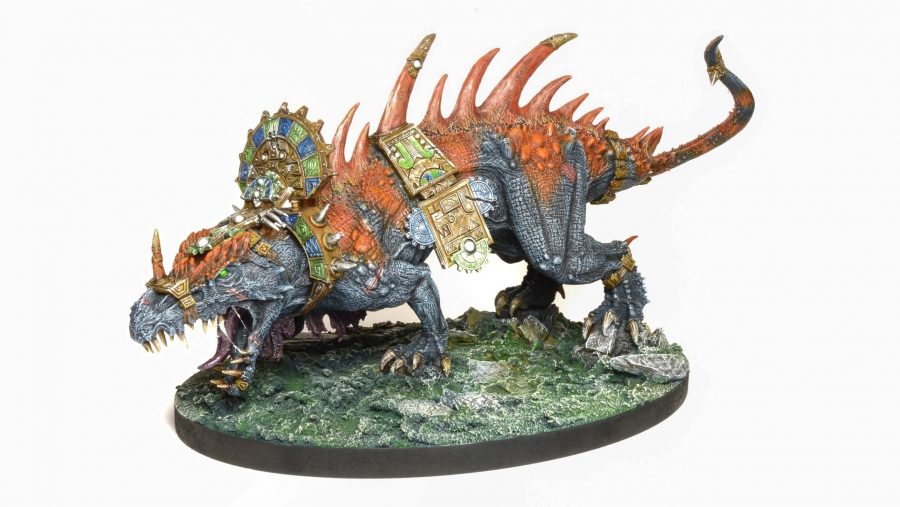 Rogue Idol of Gork (or Mork)

Ok, full-on wish fulfilment time. While the Greenskins got the Arachnarok Spider as their centrepiece on the tabletop, it’s fair to say that it doesn’t quite capture their strange combo of wackiness and brutality. Forge World has plenty of models that fit the bill – one is the Colossal Squig, but our favourite is the Rogue Idol of Gork. Or possibly Mork.

These huge totems, clumsily fashioned from whatever battlefield wreckage the Greenskins can find, are brought to life by Orc Shamans to smash and batter their way through enemy lines. Rogue Idols are a true embodiment of the ‘Waaagh!’. They’re hulking and brutish golems who, even when they seem on the brink of collapse, somehow keep fighting.