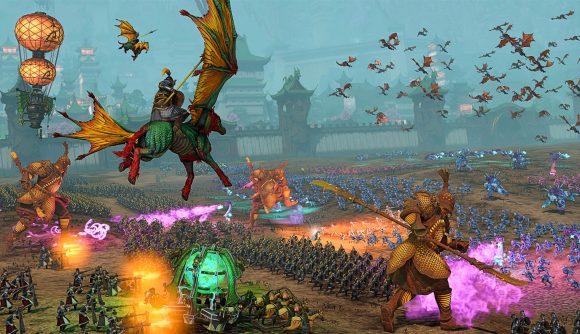 If you’re looking to prepare your PC for the big launch, the good news is that you can pre-load Total War: Warhammer 3 now. The pre-launch feature went live on February 15 at 3pm GMT / 10am EST / 7am PST, so you should be good to get started.

If you’re looking for the Total War: Warhammer 3 system requirements in the meantime, you can find them at the link. You’ll need 120GB of free space, so it’s good to be prepared.

The Total War: Warhammer 3 release time is 8am GMT / 3am EST / midnight PST/ on February 17. You can pick it up on Steam, the Epic Games Store, or the Microsoft Store. If you have a PC Game Pass subscription, though, then you’re already set, as it’ll be available from day one.

It’s a simultaneous launch, so the strategy game is coming out at the same time for everyone – naturally, that works out better for some than others. Creative Assembly has confirmed the news on Twitter with a handy infographic, which you can catch below if you want a more visual demonstration of when Total War: Warhammer 3 unlocks in your timezone.

It's almost here! Total War: WARHAMMER III releases Thursday, February 17th. We want to be sure you're ready to step up & command your armies the moment they arrive! To that end, we've created this helpful map to give you an idea of when the game arrives in a time zone near you. pic.twitter.com/2lreOIGgeK

We also spoke to Creative Assembly about the upcoming PC game in our recent Total War: Warhammer 3 interview. We went over Be’lakor, the Great Maw, and the co-op campaign. Ind, Nippon, and Khuresh are “probably never” coming to Total War: Warhammer 3, but you’ve got plenty to keep you going when the game launches.