With just over two months to go until the release of Total War: Warhammer 3, developer Creative Assembly is shovelling coal into the  hype train at an unprecedented rate. The studio has not only revealed all the launch races, but gone into greater depth about their mechanics than we’ve ever seen at this stage. It’s a bottom-up approach to hype – red meat for the core fans who can tell from these fiddly details just how radical and ambitious the game will be in its design.

But for many fans – and certainly for me – the macro stuff is a big part of the anticipation too. Previous Warhammer entries have done more than any other Total War game to try to tell a story in the series’ traditional sandbox setting. When CA is emphasising at every turn just how big Warhammer III will be, what does that look like?

CA has stated that it won’t recreate the End Times, the in-universe apocalypse with which publisher Games Workshop pulled the plug on the Warhammer Fantasy tabletop game back in 2015. But with such a sense of escalation behind it as the crescendo in a trilogy, one which also stars the Chaos Gods who were behind the End Times, it’s an understandable guess for some fans to have made. Exactly how wide of the mark were they?

CA’s principal writer Andy Hall has been the driving narrative force on  Total War: Warhammer since the original way back in 2016. We were glad of the chance to ask him all these questions, and more.

PCGamesN: As manifestations of emotion, the Chaos Gods are unconventional villains (perhaps it may not even be fair to call them villains at all). Can you set out exactly what they want?

Andy Hall: They’re more like forces of nature. The question then becomes – and it’s one that’s bothered scholars at Altdorf’s university for generations – does Khorne exist because there is rage in the world, or did he put it there when he came to be? Perhaps it’s both. In any case, I think ‘villains’ is the wrong term for the gods themselves, but their servants and scions undoubtedly play an antagonistic role both in the IP in general, and they certainly want to do destructive things in Warhammer III’s main story. Yet, are the forces of Chaos the main villain in the game? You’ll have to wait and see. 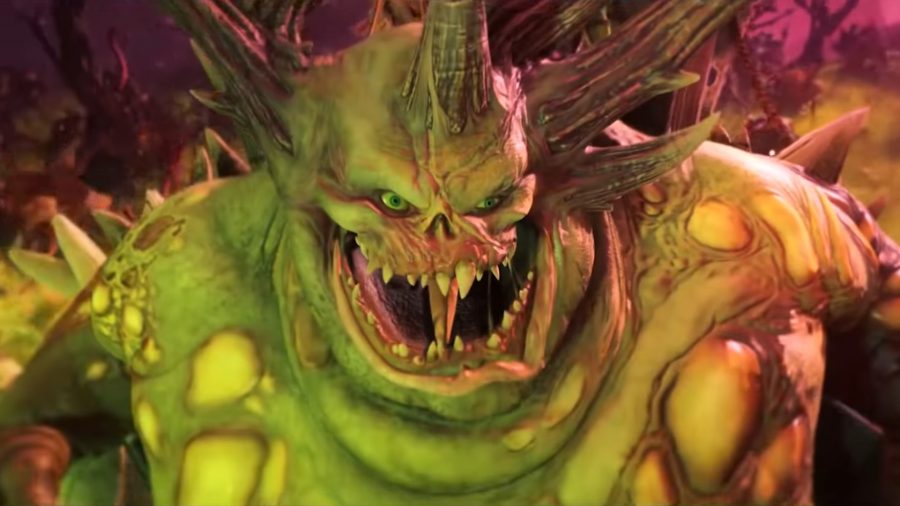 In the sense that they’re destructive forces who are also sustained by the emotions of the living things they generally seem to want to kill, is there a contradiction in their nature or motivations?

Yes, they are absolutely contradictory. If they followed a logical pattern or paradigm then that would be Order. They are (the ultimate) manifestations of Chaos; it’s not just a label, it reflects their very nature.

As to their motivations, they are playing the Great Game and, for now, the Warhammer World is their game board. They wish to win the next round, or perhaps they are planning moves that seem contradictory to their short-term goals but will see them victorious in a century or millennium’s time. Tzeentch is, of course, the master at this, but all the Chaos Gods have had their moments. The story in Warhammer III is one of such events in the Great Game that could see one Dark Power rise and another fall in standing.

What were your broad goals for Warhammer III’s story right at the start of the project?

From the beginning of the Warhammer project, narrative was one of our core design pillars. But narrative and a sandbox experience don’t always make easy bedfellows. The first game introduced some narrative concepts and events – the oncoming doom of Archaon in the north, and the introduction of our diegetic Advisor and his ultimate fate – but otherwise we left the player to create their own saga.

With Warhammer II we knew that Mortal Empires would be a pure empire-building sandbox, so that gave us tacit permission to craft a more involved narrative around the new races and to try and help the late-game campaign, which can plateau in Total War. So we introduced a race to the Vortex to keep the player engaged all through their campaign. We wanted Warhammer III to be a mixture of both, but also to escalate the odds and – above all – to motivate the player to go into the Realm of Chaos. 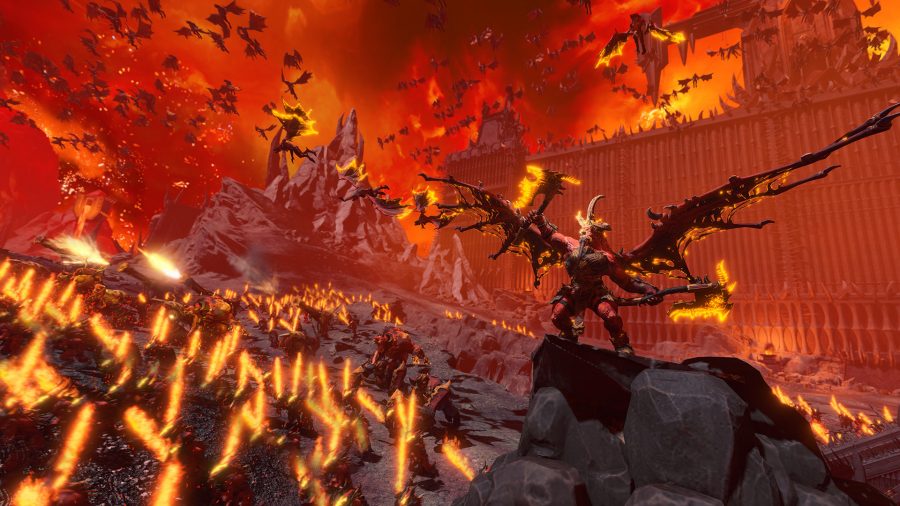 What were the big challenges in realising these?

I thought we did a good job on Warhammer 2’s cinematics, but these are, frankly, amazing

As I mentioned above, the narrative is there to give players permission to do stuff that is maybe against the character of their race. Why would the mortals and nations of order take their armies into Warhammer’s equivalent of hell? Also, we needed a motivation that worked for the Daemons as well. In theory, it should be as easy for Ku’gath to journey into the Realm of Chaos as it is for you to open your front door. But for the player, it needed to feel far from mundane. So the narrative had a lot of heavy lifting to do, to bring all these strands together, as well as feel epic and compelling no matter which faction the player chooses.

Was there a personal dimension to those goals? I remember your delight at the prominence of your beloved Skaven in Warhammer II; have you also been nurturing a story about the Chaos Gods in the decades you’ve been immersed in the setting?

Oh yes. The Chaos Gods help define Warhammer Fantasy perhaps more than any other facet, so we always knew when planning this trilogy that the third game would be their time to shine. I think in this instance, for me, it was less about the story we were going to tell and more about how we present Chaos to the player. There are many ways you can slice Chaos into Total War factions. I’ve been lucky to be all over this game like a rash, and so was able to influence that decision and I’m really happy with what we have. And I can’t wait for it all to be fully revealed! 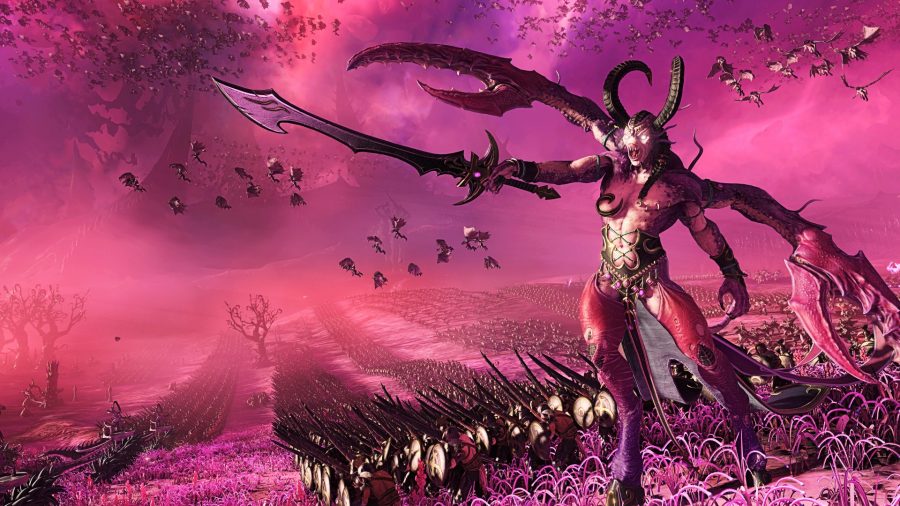 The Warhammer Fantasy world was destroyed in the End Times. We know you’re not doing that, but Warhammer III looks similarly epic and stars the same players. Can you outline a few concrete ways in which your story differs?

Well, the End Times was the grand design of the Chaos Gods and their direct scions. For once they stopped playing the Great Game against each other and focussed their servants on all-out annihilation. So the major difference with our story is that another [entity] has brought about the unfolding events. They are the real villain of this piece. Now, will the Dark Powers sit idly by? No! Each sees this as an opportunity to further their own power plays in the Great Game. We’re also killing a god, which isn’t an everyday occurrence, even in the Warhammer world. That was an interesting pitch to take to Games Workshop, who have been great in allowing us to realise these narrative ambitions.

It’s clear this is going to be the most narrative-led Total War yet. How are you telling it? Warhammer II had those lovely narrated cinematics; can you share anything about any new storytelling methods or instruments in Warhammer III?

As a writer it’s hard but necessary to acknowledge that very few players are going to patiently sit and read big wodges of text on screen mid-game. So we’ve tried to get the story across in several different ways; we have the actors talk audio-play style where relevant, in-game cut scenes, a few other tricks, but undoubtedly the stars of the show are our cinematics. And full credit for them must go to Laurence, David, and James in our cinematics department, as well as the actors’ voiceover performances for creating some world-class storytelling. I thought we did a good job on Warhammer II’s, but these are, frankly, amazing. I showed my wife one particular scene – let’s just say she’s not a Warhammer fan so has little affinity with the material – but even she gasped out loud at a crucial moment, she was so taken with events. So, yes, it’s something myself and the team are very proud of, and we can’t wait for you all to see it! 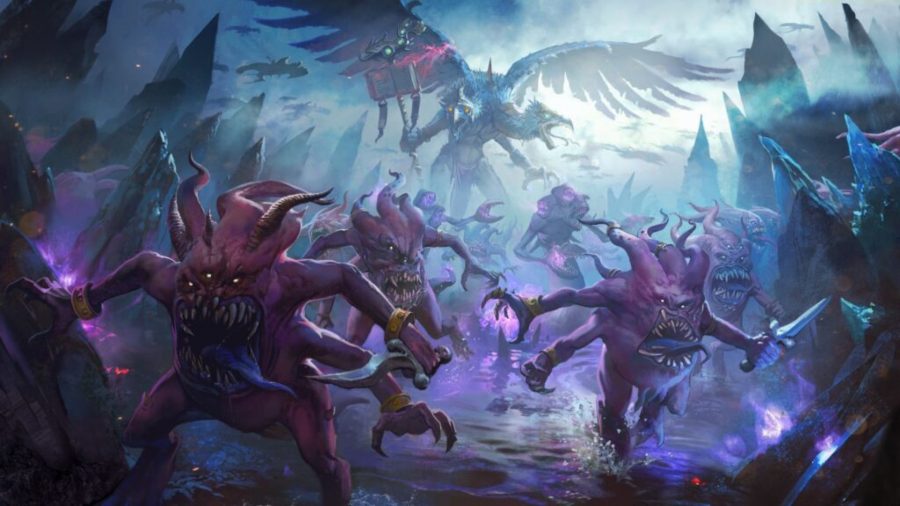 Warhammer II’s launch factions had similarly structured storylines, though the Skaven had a slight twist. Can we expect bigger divergences in each faction’s stories in Warhammer III?

We certainly go deeper into the motivations not just with the factions, but with their Legendary Lords, so the player understands why each character is participating. And we flesh out their relationship with the Advisor too. It’s not something we gloss over in this game as we have perhaps in the past – why is this old man advising Grimgor? I’ve implied why in bits of sundry fiction for the other games, but this time we go all in on those relationships.

Hints that we can decide the fate of the dying god, and promotional taglines like ‘conquer your Daemons, or lead them’, suggest player choice might play a big role in Warhammer III, perhaps in its story. Can you shed any light on that?

Ha! I feel I’ve got an arm tied behind my back trying to answer this one. Needless to say, with one race in particular, you’ll be defined by your choices.