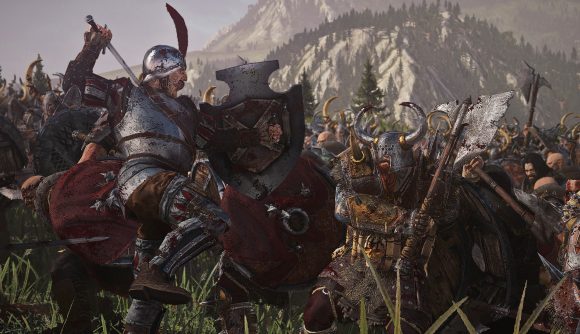 If you’re a frequent patron of the r/totalwar subreddit or even the official Total War discord, you might have noticed everyone seems a little excited today. This is because since last Friday, Creative Assembly has been teasing… something.

There have been four teasers, each a short animated video with some dude rambling while he looks into a telescope, and in each of the teasers he sees a different constellation from the Warhammer Fantasy universe. First it was Grungni's Baldric, then it was The Piper, followed by The Drummer and The Cauldron together. If you follow the analysis from the fans on reddit, these are each meant to relate to a specific Chaos God from the iconic Games Workshop pantheon: Khorne, Tzeentch, Slaanesh, and Nurgle.

There was also one final teaser that showed the ‘Sign of Ursun’, which is the God of Kislev. Kislev is a minor faction in Total War: Warhammer that’s never had any specific attention paid to it, but it’s a fan-favourite amongst the Warhammer community and a highly requested faction. They’re the most northerly human civilisation in the Old World and a strong ally of The Empire.

In the game, they often suffer at the hands of either Norscan tribes or the big Chaos invasion at the end.

But what does this all mean? It seems a bit much for a new Total War: Warhammer 2 DLC considering all of the teasing and the content contained within, but there’s been no sign that Creative Assembly is done with the popular Total War title just yet. The community, on the other, hand is anticipating the imminent announcement of Total War: Warhammer 3.

This would be the third in Creative Assembly’s Total Warhammer trilogy, and by all accounts we should have had an announcement on it already. Hints dropped last July suggested that the COVID pandemic has delayed the studio’s original timeline. There are probably other things these teasers could relate to, but the references and other potential leaks point in one direction more than any other.

Buy Now:  While you wait, pick up Total Warhammer 2 on the cheap

Whatever it is, we should find out by this time tomorrow. The final Kislev-related teaser concluded with these words: “something evil is coming, and it arrives tomorrow”. We’ll come back later, then.