Total War: Warhammer II is out and it’s a blast. Like all Total War games, it is also a complex beast, and it can be hard to get your head around at first. We have specific guides for playing each of its four races, but we also accrued many more miscellaneous tips that will help you seize the Vortex no matter your allegiance. Read on.

Ah, but why is it a blast? For our reasoning, check our Total War: Warhammer 2 review. 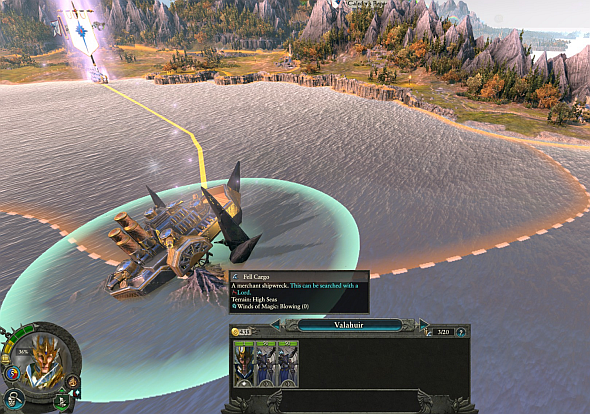 Hire a new Lord, put them to sea, and hunt down every Skull Reef you can. Do this on your first turn. Skull Reefs each give 10,000 gold plus a magic item, which is obviously a hugeboost, especially early in the game. You can’t go wrong with looting encounters at sea generally, but Skull Reefs are worth braving almost any hazard for.

Lords and Heroes can now attain level 40, but we have noticed they tend to get killed (rather than wounded) a lot more often. First thing to note if you want to protect them is the new Immortality skill at the top of the character sheet, which will ensure that a bit of wounding is the worst that ever happens to them.They will then be available to recruit again after a few turns. 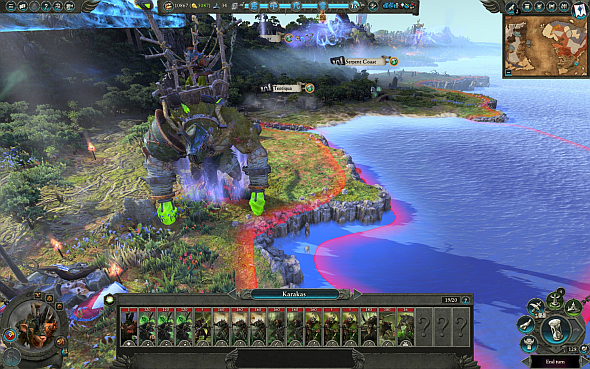 Related to the above, March stance is much more precarious now in that it no longer allows you to retreat when attacked. Use it recklessly and you risk finding yourself in unwinnable battles and losing that promising Lord. It is now for rushing around your heartlands to squash that last Chaos invader, not for advancing into enemy territory. *Wags finger.*

Garrisons are that hot new thing

Between ritual-spawned Chaos stacks and Intervention attacks, Total War: Warhammer II can conjure a lot of horrible threats out of nowhere. Unless you have sentries in the ocean (or the High Elves’ Maritime Empire tech), threats can also sneak up on you from across the pond.

In this context, garrisons are the new settlement configuration meta (which is definitely a thing). Provincial capitals also have more building slots, so you’ve plenty of space to bolster your defences. A fully upgraded garrison building in a tier-five settlement has enough troops to see off almost any single-stack army, and even in a tier-three settlement, your rivals can’t attack with real confidence until they’re fielding their elites. You will also note that the ritual currency building chains in appropriate settlements will add yet more forces to the garrison.

Your empire is far more vulnerable from many more angles in Total War: Warhammer II, so you should put garrison buildings in any settlement that is likely to be attacked (to the extent that you can predict such attacks) or that you simply don’t want to lose. 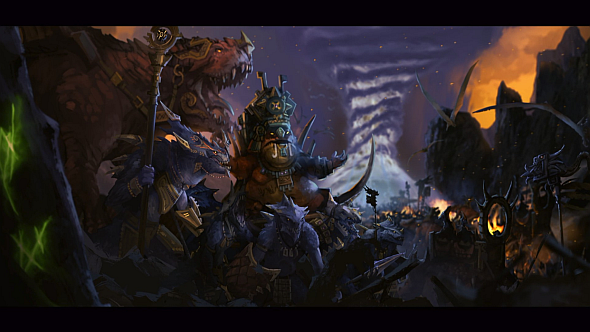 What with all the hype around the Vortex campaign, it is easy to forget that you can technically win Total War: Warhammer II the old-fashioned way. For the Domination victory, you need to eliminate all Legendary Lords not of your own race, and to control 50 provinces through either direct ownership, vassalisation, or military alliances. 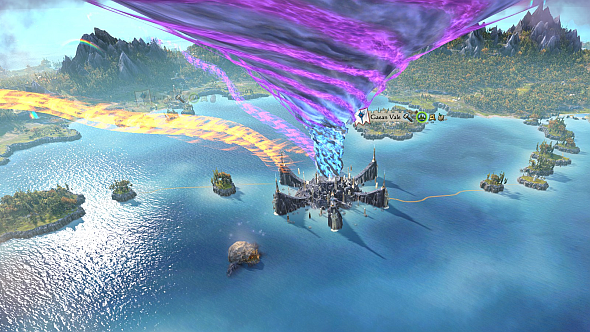 When you are attempting a Vortex ritual, you are guaranteed some unwelcome visits by the ruinous powers. In addition to whatever intervention armies your rivals may choose to send your way, rituals will spawn a mix of Chaos and, later, Skaven stacks in your territory, along with Marauder warbands out at sea.

The first ritual spawns just one Chaos Warriors stack, and it won’t even be full. The third is a big escalation, spawning three stacks of both Chaos and Skaven, along with two Marauder warbands, all full. The fourth spawns five full Chaos and Skaven stacks. The fifth and final ritual, which lasts 20 turns rather than ten, does this again, but twice – once when you start the ritual, and once again halfway through.

Preparing for these invaders is key to surviving them. We reloaded autosaves and played around with our army placements to see if we could anticipate their arrival, only to find that their turned up somewhere else, which is bloody annoying. Our current theory is that they avoid your armies as a first priority, and spawn near your ritual cities as a second, without a bias for any one of them (unlike Interventions, which generally spawn close to one unlucky settlement). 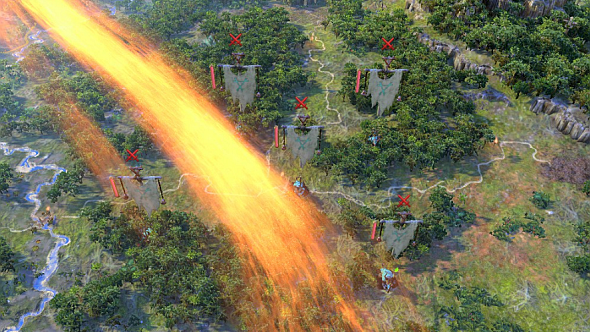 This can lead to some very weird spawns – as High Elves, one of our ritual cities was Tor Elasor, while the others were all on Ulthuan. This resulted in Chaos stacks appearing halfway between the two in Araby, miles away from anyof our settlements, which suited us fine. Trying to engineer a helpful spawn as the Lizardmen, however, we managed to get all five stacks to drop on the western half of Lustria when all of our ritual cities were across the mountains to the east, near our most vulnerable cities. All observations suggest that they only ever move toward a ritual city, but they have no qualms about razing vulnerable settlements on their way.

Given all of this, we have some tips for surviving late-game rituals. At the very least, you will want a high-tier garrison building and a fully stacked army in each of your ritual cities. Invading stacks rarely combine forces, so this should guarantee that they will besiege you rather than risk a direct attack. You can then break the siege yourself if you are strong enough, or send reinforcements.

Your Vortex rivals are not your friends

Both the Vortex and Domination victory conditions will require you to fight the other major powers at some point, so don’t get used to cordial relations.

If you are chasing the Vortex victory, you will accrue escalating diplomatic penalties with all rival races for each ritual successfully completed. While these are an obstacle to useful trade deals and the like, they aren’t insuperable until you complete the fourth ritual, after which you are locked into a non-negotiable state of war with all rival Legendary Lords. The Domination victory also requires you to eliminate them all.

To win, you have to fight the other Vortex chasers, so plan with that in mind.

Who does everyone hate? 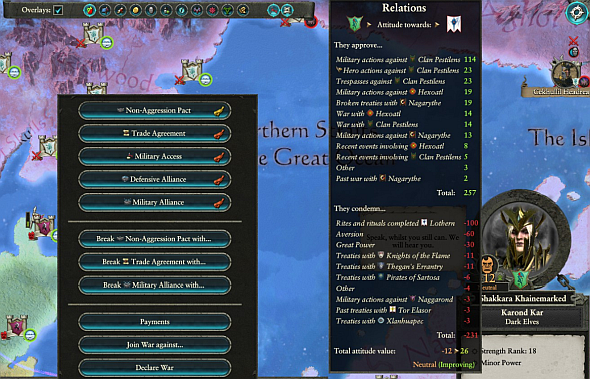 Diplomacy in Total War can sometimes feel like swimming upstream. You finally have enough spare gold to send someone a gift, to try and land that lucrative trade agreement, but they are still not biting. After a while they forget about your present, but that great power modifier is souring relations just as it ever it did. It is tough being such a big deal.

A good question to ask is: who does everyone hate? Check the diplomacy overlays to isolate the faction with the most current wars. Then go join the pile-on. You will get an instant boost just from being at war with everybody’s grudge, and any substantial losses you inflict on them will earn you further credits. If you are trying to befriend one faction in particular, the same advice applies – just pick on their enemies specifically.

It is a fairly elementary trick, but you would be amazed how far it can go. In my Tyrion campaign, I was able to make three or four highly profitable new trade deals when it finally came time to take out Clan Pestilens – I even got to neutral standing with a Dark Elf faction. Had I noticed that everyone else hated the Skaven as much as I do, I would have attacked them much sooner.

Whichever Legendary Lord you choose, you’ll begin with only a handful of settlements, and the rest of your civilisation will be fragmented into many smaller factions. Obviously you will have to expand in order to win, and you have only two options to do so: conquest and confederation. The latter option is bloodless and efficient, but only other factions of your race are eligible. Before they will accede, you will need to be quite a bit more powerful than them in military terms, and to share close relations – a defensive alliance is generally a minimal requirement.

Your trustworthiness rating is also crucial, so terminate non-aggression pacts well in advance of declarations of war, if at all possible. This is a good tip for successful diplomacy more generally, and High Elf fans – who can make a truckload of money from trade agreements if determined – should take particular note.

There are hazards in confederation; mainly, that it incurs a lengthy diplomatic penalty with all other factions of your race. It may be tempting to absorb tiny Nagarythe just because they are willing right now, but if Teclis’s Order of Loremasters needs a little more encouragement, it is probably better to butter him up a while longer for a bigger reward, than to put him off for ages with this confederation penalty. 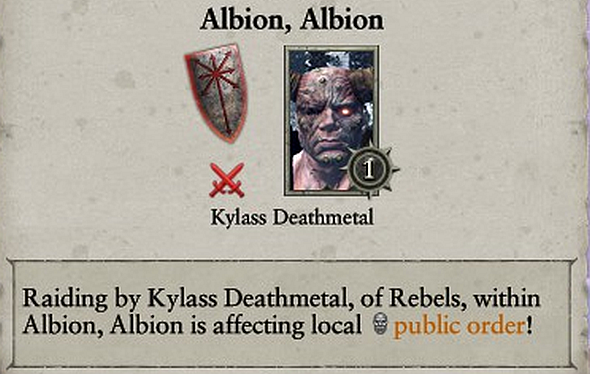 Less a tip, this, but everyone deserves to know that it’s possible.

Happy conquering! If you have any tips of your own, share them in the comments.