Update, October 20: We’ve now got an October 26 release date and a full map for the combined Mortal Empires campaign.

Total War: Warhammer 2 is about to offer a significant bonus for players who’ve stuck with the series in the form of a massive campaign map combining the boards from the original and the sequel. This Mortal Empires campaign is being offered as a free update to those who own both titles, but you’ll only need Warhammer 2 installed to play it.

We’d known all that for some time, but Creative Assembly have spent the past few days revealing further details on the new add-on. Today they unveiled precisely what the expanded map will look like, including the starting position of all its legendary lords. (Click for a better view.) 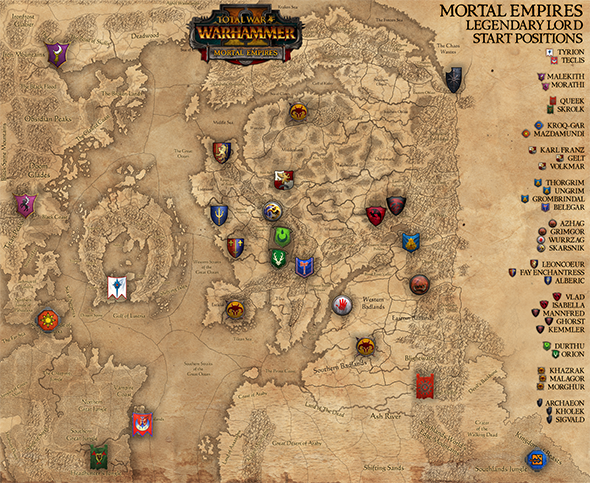 Mortal Empires will be available October 26, and Creative Assembly have gone ahead and done the math on how big the new campaign will be. 117 starting factions, 96 spells, 35 legendary lords (if you’re caught up on DLC), 295 settlements, 268 battle maps, 352 unit types and, presumably, a partridge in a pear tree.

The new map is quite the full, unaltered originals stitched together, but it’s still a massive stretch of land to conquer that should keep you busy for quite some time.

You only need to own Total War: Warhammer on Steam – not have it installed – to get the Mortal Empires combined map.

The news comes from developer Michael Whelan onthis Steam thread. As we learned when it was first announced (see below), Mortal Empires is a new map, not the Old World pasted next to the new one. This explains why files from the original aren’t necessary.

We still don’t know when exactly Mortal Empires is due for release, now that Total War: Warhammer II is out, it’s number one on Creative Assembly’s post-launch agenda. As their developing free-DLC schedule indicates, we can also expect three more Legendary Lords and “an experiment” in the coming weeks.

The background images on those Legendary Lords suggest Skaven, High Elves, then Lizardmen. Our guesses: Ikit Claw (not Thanquol – he’s big enough to be premium DLC), Imrik, Lord Kroak. When the Dark Elves get theirs, it surely must be Malus Darkblade.

Original story September 21, 2017:Creative Assembly have been clear from the start of their Total War: Warhammer series that the ultimate goal is to get all 15 of the tabletop game’s eighth edition factions on one massive map. We heard a while ago that, after the release of Total War: Warhammer II, owners of the first two games would get a free update that unites both maps. Now, with the sequel just a week away, CA have shared some final details about what this will look like.

The united campaign will be called ‘Mortal Empires’, and it’ll sit alongside the Old World and Eye of the Vortex campaigns for owners of the first two Total War: Warhammer games.

It’s not as simple as pasting the second game’s map onto the first, though. Instead, Mortal Empires will use a new map based on the areas of the first two. All the playable races and factions CA have released thus far will be present, though Norsca aren’t quite ready yet – rather than delay the big map’s release, CA are patching them in later.

The Mortal Empires campaign will have no story mechanics, but be a more traditional Total War-style sandbox. It’ll also include Warhammer II’s refinements to the campaign map, such as rogue armies, eight- and ten-slot cities, chokepoint maps, climate mechanics, encounters at sea, storms, shallows, reefs, and a host of UI tweaks. It will have 295 settlements and 117 starting factions, compared to 142 and 66 respectively, in the Old World campaign.

CA do admit that, as a consequence of all this size, you should expect increased end turn times. “There’s no getting around it,” they say – ah, well.

As with the first game, Total War: Warhammer II will have a robust schedule of both paid and free post-launch content, and CA are working on an infographic to help you track the free stuff. As you can see, it hasn’t all been confirmed yet, but will include three new Legendary Lords and “an experiment” as well as the Mortal Empires campaign, which will be the first release. Again: this stuff is free, but other stuff will be paid, including the almost-certain Tomb Kings DLC.

Further into the future, CA will follow a similar model for Total War: Warhammer III. That game will also have a main campaign, and then a free “very big campaign” for owners of all three games, which will finally realise that vision of getting every Warhammer race together in the sandbox. Speaking of which, the blog signs off with a cheeky tease about the Daemons of Chaos, whom you should expect to be the major antagonists of the third game.

Here’s the post over on the Total War blog.