To no-one’s surprise, Total War: Warhammer is not a game you’ll gain an encyclopaedic grasp of after a week’s play. In fact, if you’re approaching it without having been well-versed in the intricacies of either Creative Assembly’s all-encompassing strategy game style, or Games Workshop’s infinitely deep tabletop game, or both – well, there’ll be a learning curve. But you’ll want to ascend that learning curve, for the following reasons.

The Total War franchise has left its mark on our best PC strategy games – will Warhammer join it?

One: it looks gorgeous. Creative Assembly could have gone in one of two directions for the visuals. They could have tried to depict the fantasy world that the Warhammer tabletop game implies, or they could retain the familiar figurine aesthetic and bring it to life. By opting for the latter, they’ve given the game an irresistibly tactile quality.

Before I’m shown the ins and outs of the barbaric Greenskins, the camera soars dramatically over the Old World’s distinct regions. The developers tell me this flyover cam won’t be in the final release. It’s a shame – if you’re not already fluent in its geography, that sweeping journey is a fantastic introduction. 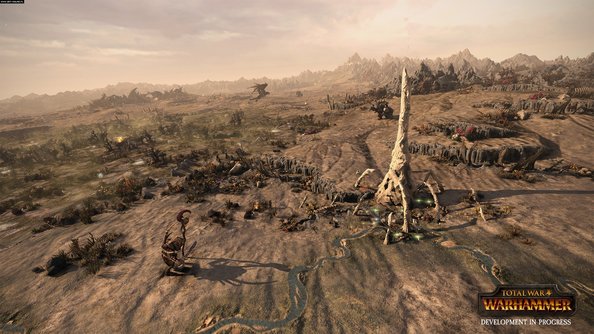 The pointed sticks, snowcapped mountains and choppy seas of its world map all appear hand-painted, likewise its inhabitants. Whether or not you’ve spent time flicking battle scars onto a tiny figurine, inadvertantly high on the fumes of its base coat, the look of the Old World and its perpetually warring factions holds a considerable draw.

The hyper-aggressive Greenskins are the race Creative Assembly focus on as they show off their latest build. Their native Badlands lands are arid, characterised by pointy sticks and piles of bones. Moving north into the mountainous Dwarven territory, their impressive architecture is evident in their settlements and the bridges spanning between mountains. The air looks clearer here too, less dusty. Way above that, a Vampire Count positioned amidst otherwise cosy Empire lands has physically transformed his surrounding area with his dark vampiric influence. It’s a patchwork quilt of war.

There’s an increase attention to detail in the settlements, and the heroes themselves, in comparison to former Total War titles. The camera arrives at an Orc general named Muzg the Astute laying siege to a mountainside Dwarven stronghold. Commanding a vastly larger and more powerful army, he wins the battle easily (via auto-resolve, there’s no boots-on-the-ground combat in this playthrough) and takes the stronghold for the Greenskins. Presented with options to occupy, loot & occupy, sack, or raze, he opts to occupy. 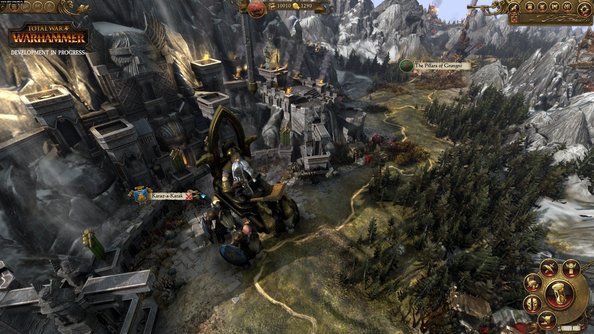 It’s a very familiar gameplay loop for Total War fans, but the incidental details involved are all-new and significant. The once-Dwarven town now instantly bears the iconography and furnishings of its Greenskin occupants. The clean, straight lines of the original architecture remain, but they’re hidden beneath crude wooden skull symbols daubed in crimson.

Two: (forgot this was a list, didn’t you?) it’s an RPG in strategy clothing, complete with loot, levelling, and buffs.Heroes, Lords, and Legendary lords can each be equipped with up to six items, all with their own stats and properties. It adds a sense of ownership to the key characters in your empire, and further authenticity for Warhammer tabletop players.

Because rather than ordering around a genero-Greenskin to do your bidding, you’re often ordering around a familiar character within Warhammer lore around instead. And when you dive into that familar character’s skill tree, you’ll be presented with opportunities to equip familiar weapons, items and mounts, too. It takes a lot of work to unlock this unique gear, though – highlighting it in the skill tree menu begins a quest chain which culminates in a particularly gruelling battle. It’s only upon victory in one of these battles that the trinkets are yours to equip. 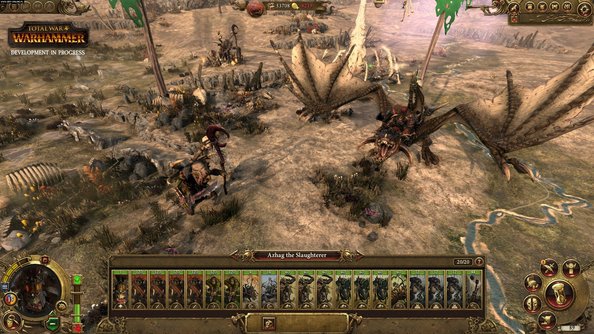 Creative Assembly show me an example: Azhag the Slaughterer, one of the Greenskin’s Legendary Lords, can sit atop his pet Wyvern Skullmuncha after working his way through the skill tree, changing his behaviour in battle completely by turning him into an aerial threat.

All Lords have skill trees with three branches: campaign skills, battle effects, and character stats. Campaign skills help them navigate the world map and give slight buffs to certain stances – our old friend Azhag gets 5% more income from sacking settlements thanks to his Campaign skills.

Battle effects give buffs to their troops, as can banners earned from previous battles. These might boost a unit type’s charge bonus, or range, or attack value. Finally, character stats affect the Lord themself, across an array of very RPG-like categories: armour, base morale, speed, magic defence, etc. 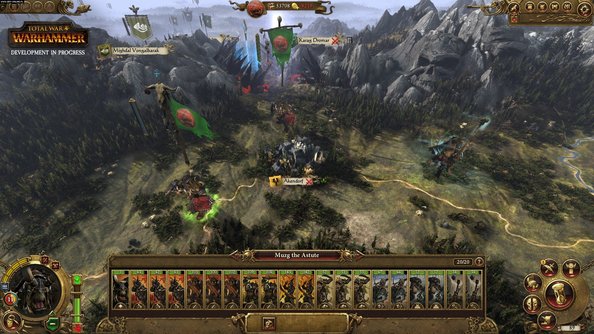 Three: (you keep forgetting about this list device, huh?) there’s more depth here than in the Mariana Trench. Its myriad trees and upgrade paths give Total War: Warhammer’s races radically different tactical approaches, and one upshot of that is the Greenskins’ Fightiness. Captial F Fightiness, it’s a proper mechanic. Likewise ‘Waaagh!’ but we’ll get to that.

Orcs are naturally warlike. Fighting is in their blood. So when they don’t have enemies to fight, their Fightiness level (shown next to the Lord’s portrait on the left in the above screen) begins to drop. If it drops too far, they’ll turn on each other and you’ll watch your armies diminsh in size each turn, aghast. Orcs are not a clever race.

If your troops haven’t fought in a while and you’re not near an opposing army, you can avoid this scenario by telling the Lord in charge of that rabble to enter the Raidin’ Camp stance. Setting up a Raidin’ Camp not only stops your troops from killing each other, but provides income, replenishes troops, and gives the Lord access to global recruitment. New units are more expensive when recruited this way, and take longer to arrive, but it means the Greenskins can replenish and grow their armies deep in enemy territory. 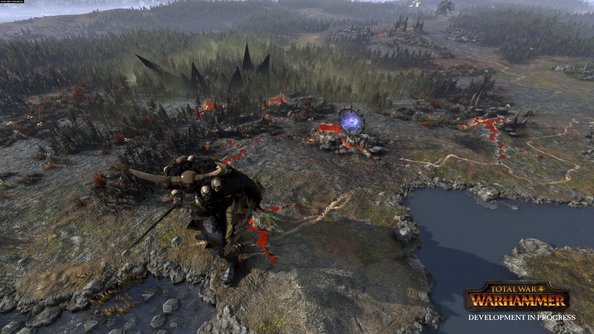 If an army’s Fightiness goes in the other direction, maxing the gauge out, it’ll initiate a Waaagh! (told you.) This frenzied state summons a second, AI-controlled War Lord to the battlefield, completely with a nicely stacked army. It’s a mechanic that encourages Greenskin players to keep fighting, no matter what; no pause for breath. Your numbers might be thinning, but you’re close to initiating that Waaagh! Do you set up a camp and recruit more troops, or do you plough on and get that bonus army?