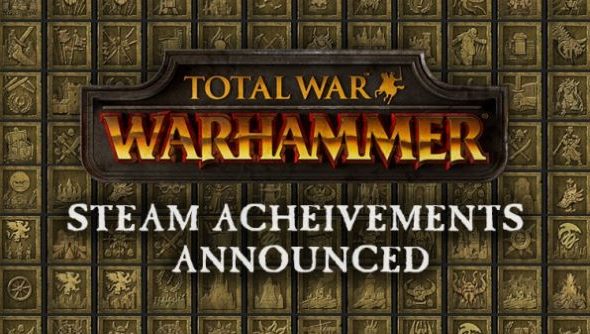 Total War: Warhammer is just around the corner. We’ll be bringing you a review before launch, but in the mean time you’ll have to put up with the scraps from CA themselves. Today it’s the Steam achievement list going live and before you close the tab and tut in disgust, it’s a little more interesting than that implies. Along with your standard kill a billion people, make a billion gold cheevos, there’s one in Total War: Warhammer for taking out a member of the development team in multiplayer.

Try the best strategy games while we wait.

The achievement, titled “You vs. the Great Unclean Ones”, reads that you must “defeat a CA staff member, or anyone else who has this achievement, during a multiplayer battle.” So for those not paying attention, the point is that it will spread like wildfire out amongst the community and should be fairly easy to get so long as multiplayer remains populated. Here’s some of the other, odder achievements available:

Full list over on the official site. Game’s out May 24, and we’ve got absolutely everything you need to know about it over here.