The Norscans are the primal people of the Old World’s far north, where chaos energy blows just as strongly as the freezing winds. They share their home with creatures from nightmare – the ice drakes who carpet their caves with bones, and the bloodkrakens who plague coastal settlements. Yet the Norscans don’t hide from these terrors, instead seeking them out as terrible trophies.

Their fanatical bravery pales, however, when compared to that of their artists and animators at Creative Assembly. When the team added the Norsca faction to Total War: Warhammer, it faced off against one of its most feared enemies: fur.

“The bane of an artist is hair and fur,” lead character artist Baj Singh tells me. That makes the mammoth, the towering centrepiece of the Norscan army, an artist’s nemesis.

“We have one triangle which is half a polygon and we assign a bit of fur to that,” Singh explains. “Then we take that, duplicate it, and we do that about 6,000 times.” Each triangle is individually positioned on the model to give the best effect. 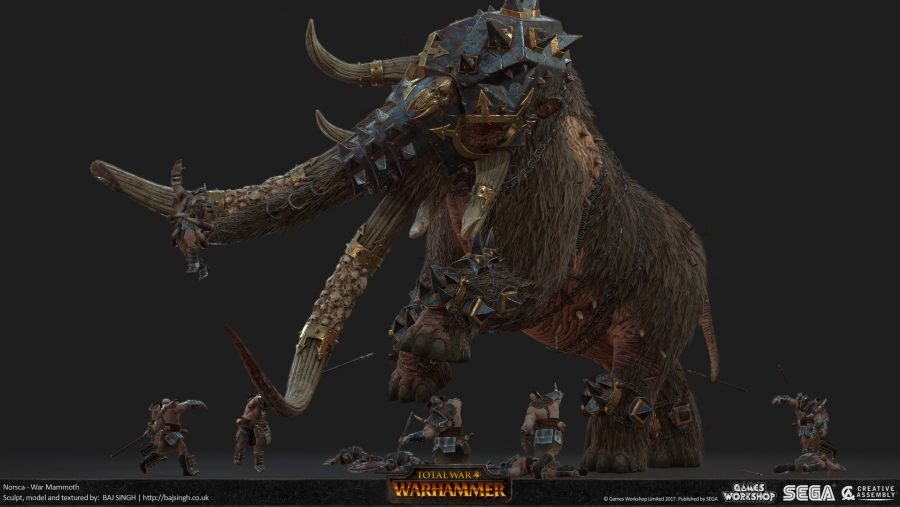 This dogged intricacy reminds me of Games Workshop’s most ambitious tabletop pieces – specifically the Smaug model with countless individually carved coins covering its base. In work like this, though, it pays not to grant too much attention to each tiny element.

“They’re so small that you can assign them to different bones very quickly and not worry about them intercepting too much,” Singh says. “It’s just going to give the illusion of this big, shaggy creature.”

And big they are. Creative Assembly has modelled elephants before, for the Carthaginians and the Persians, but Total Warhammer’s mammoths exist on a fantastical scale that pushes right up against the game’s limits.

“We are constrained because they have got to go through gates,” project art director Greg Alston says. “The mammoth is pretty much on the limit on height, so think of those bridges as height restrictions.”

If a unit model were too tall, it would clip through city gates – rather taking away from the spectacle of siege battles. Too wide, and it would become a problem on the campaign map, interfering with buildings and trees. As it is, the mammoth is very close to the engine’s height limit, which put paid to an especially fearsome unit concept.

“I think my only regret is we never got the giant riding the mammoth,” Singh laughs. “That would’ve been a great unit type.”

Even without a giant on top, the mammoth is one of the most visible units on the battlefield. As a player, it’s one you’re likely to draw the camera to, gazing at its chained flanks and bloodied tusks. For that reason, Creative Assembly put more bespoke animation work into it.


“We’ve got lots of infantry with animations you don’t tend to see, especially from a distance,” Alston says. “Where really when you want to put in the effort is for combat against a giant character. You want to signal to the player, essentially waving it at them.”

Art and animation are some of the most resource-intensive processes in game development, and budgetary concerns come up a lot in our talk. "Fur and chains are just flat cards because it would have been too expensive to model each of them individually," Baj Singh says.

That’s why most infantry types have their own “victim animation” – as in, a grisly and satisfying payoff for a mammoth charge. Creative Assembly knows that if you’re expecting to see goblins gored by a tusk as tall as a man, that’s where you’ll be pointing the camera.

Then there’s another consideration: weight.

“War mammoths are elephants on acid,” Alston says. “So we had to spend a lot of time looking at heavy animals and dinosaurs, slowing down the animation to emphasise the weight.”

Something as simple as a mammoth’s walking animation goes through an intensive iterative process to make sure its pace matches the needs of a design team concerned with balance.

“If it moves too slow because of its weight then that may not necessarily be great for gameplay,” Alston says. “Then you need to add the layer of character and personality, so it can be quite a big thing to juggle at times.” 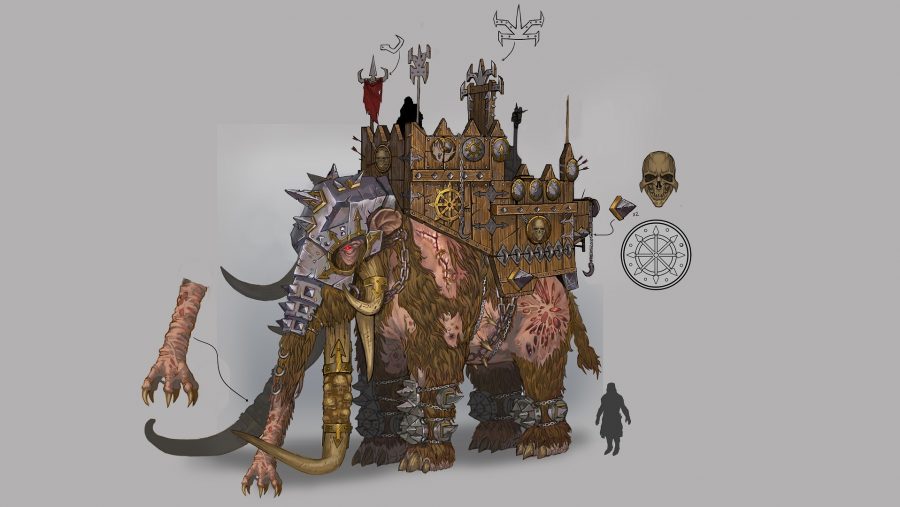 Interdepartmental communication is crucial, since making a dramatic change in a creature’s animation speed isn’t as simple as pressing fast-forward. You’ve probably seen it before – a game character who appears to slide across the map because their gait doesn’t match their speed.

“Actually that can completely break the animation,” Alston notes. “If you go Benny Hill mode it turns into comedy, and you lose that sense of weight.”

In an ideal world, the animators would give the mammoth more gears to switch between than simply walking, running, or charging – but creating those would demand extra memory allocation and push up Total War: Warhammer’s minimum requirements. Not to mention, take time away from arguably more important animations.

“You try and make sure that you do the fewest possible animations to cover the range,” lead technical animator Lee Dunham says, “so that you’re not spending half of your animation schedule budget on just doing walk cycles for characters. Because then it would be no fun. There would be no combat.”

For the Norscans, a mammoth is something to show off, and that’s true for Creative Assembly as well. The studio’s beasts are built to draw the eye – not as trophies, but as focal points for the high fantasy drama Total War: Warhammer does so well.