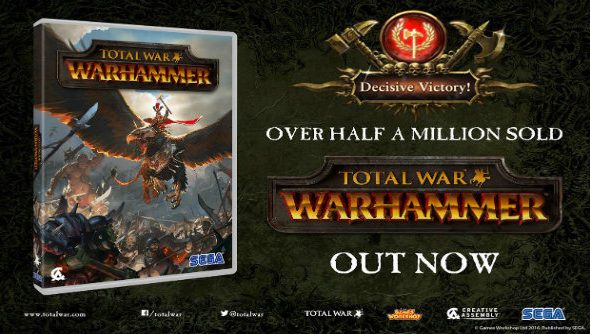 Our list of best strategy games should bring out the army general in everyone.

It only took a few days on sale for Total War: Warhammer to rack up half a million sales, setting the record for the fastest-selling Total War game on Steam, according to publishers Sega.

Our Fraser thought it was a decent, if not mind-blowing, addition to the strategy series, saying in his review: “Warhammer is a worthy addition to the series, particularly as a melding of two universes we’ve long wanted to see collide. And before long, as the patches roll in, it could be even more than that.”

This combination of two universes seem to be the catalyst for this mass appeal, making a generally niche series more appealing because of its attachment to Games Workshop’s world.

“Total War: Warhammer has already proven itself as a runaway commercial success and more importantly we know our players are really enjoying the game.” said Creative Assembly studio director Tim Heaton. “We have been regularly topping 100k concurrent players.”