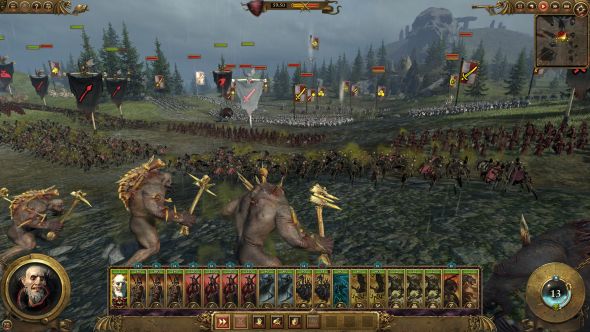 Total War: Warhammer developers Creative Assembly are rolling out a battle map editing tool, pleasantly called Terry. A full release is slated before the end of the month – a month in which we’re also expecting news about the fully fleshed-out Bretonnian race – but if you’re on Windows 10, you can get into the beta now.

Between Halo Wars, Warhammer and Total War, CA are busy these days. Keep track with everything Creative Assembly are working on right now.

‘Terry’ is a land battle map editor with a “full suite of environment models, props, SFX and VFX”. You’ll be able to add AI hints, set deployment zones and no-go regions, paint textures and vegetation and so on. One-click exporting creates a .pack file for your map, which you can toggle on and off in the Total War launcher and share on Steam via the workshop. Maps will also be automatically pushed to your friends if you want to play a multiplayer game on your creation.

For more information, check the announcement on the Total War forums.

If you’re a creative type, thinking the new tools will finally let you make that epic Cathay campaign you’ve been writing in your head, you may be disappointed. Creative Assembly say they can’t release a campaign map editing tool because the tools they use themselves are a mix of tech, including some from third parties they can’t distribute. Making a campaign editor from scratch “would take us a long time and delay the next Total War”, which no one wants to see.

YouTubers DarrenTotalWar and PartyElite have shown off the Terry tool on their channels, so you can get a sense of what it’s like to use.

What will you make in Terry?