If you’ve been watching the gradual reveals of Total War: Warhammer and becoming very impatient for a release date, we won’t keep you waiting any longer: it’s April 28th 2016. And like any big release, it comes marching in accompanied by pre-order bonuses and three different variations you can buy, depending on your willingness to splash that cash.

Discover how Creative Assembly made the leap from historic epics to fantasy sagas in our Total War: Warhammer interview.

Anyone who pre-orders the game in any guise will get the first DLC pack for the game free. That would be The Chaos Warriors Race Pack, and you can see that in action in the trailer above. It allows you to play as Chaos in the Grand Campaign, adding three new Legendary Lords with an armoury of twisted and cursed magical items, narrative quest-chains, and new mounts.

Your purchasing options are either the standard edition, the Limited Edition, ot the High King Edition. The Limited Edition comes in a metal case and an Insider’s Guide that offers tactical advice and information that will be useful when playing. 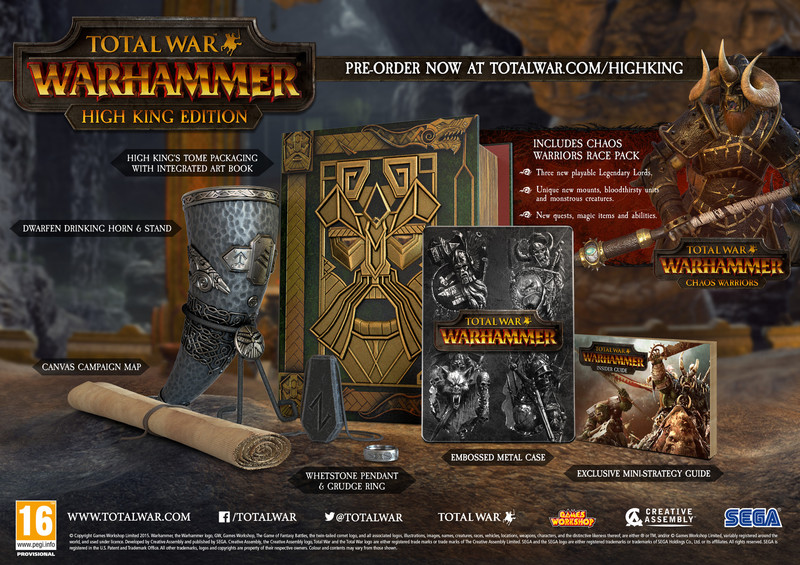 The High King Edition comes with the metal case and guide, as well as a metal Grudge Ring with rotating inner band and numbers that allow it to function as a dice, a Slayer’s Whetstone Pendant, a Dwarven Drinking Horn and stand (which can actually be used to drink a pint from), a canvas map, and an art book. Naturally it costs a small fortune, and can be pre-ordered here.

You’re almost certainly going to buy it. But which edition is for you?