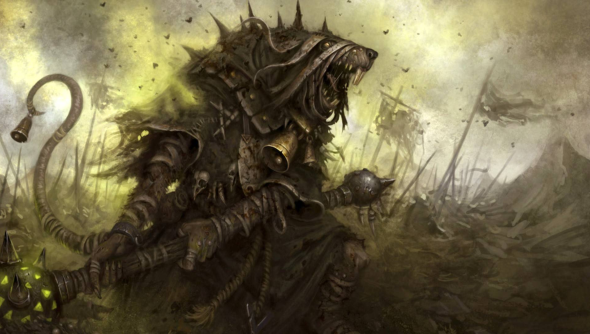 The games industry is full of secrets. They spill out of desk drawers, fill the break room, and block the chimneys. You’re liable to step in one at a games studio with every other step. It’s a small wonder that Creative Assembly’s kept Total War: Warhammer a secret for more than two years but it was going to slip out eventually.

And slip out it has, right onto the pages of The Art of Total War.

A little over two years ago Creative Assembly struck a deal with Games Workshop to make a game in the Warhammer Fantasy universe. Alien Isolation, Total War: Rome 2, and Total War: Attila kept the team distracted until now but it sounds like the strategy team are at this very moment compressing Orks, Skaven, and Breton warriors into tiny RTS-sized playing pieces.

Simpson said it while describing how Total War has changed over time: “What we play affects the way we think about what we want to do for the future, such as making games which people can play for longer periods, or looking at ways to pull more social aspects into the game. Multiplayer has never been Total War’s strong point in the past, and that’s something we’re looking to radically change with Total War: Arena. For most strategy games, multiplayer is almost all of the experience or, at the very least, a sizeable chunk of it. We’re also experimenting with this in the mobile space, with Total War: Kingdom, and taking the series to a fantasy setting with Total War: Warhammer.”

With Alien Isolation out and Total War: Attila out next month, Creative Assembly were likely going to announce Total War: Warhammer in the near future anyway but this early confirmation’s got me excited; I played a lot of Warhammer Fantasy when I was younger and never could understand why it hadn’t been adapted into a good computer game. It has a bunch of wildly different armies, powerful spells, and unit designs ranging from the beautiful to the stomach turningly-hideous.