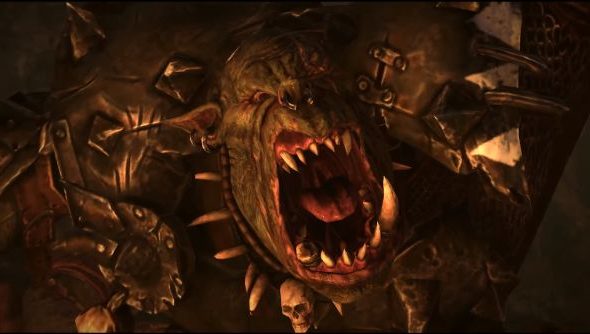 We’ve all got decisions to make. The latest Total War: Warhammer trailer is all about that, presenting orkish leader/angry man Grimgor Ironhide with battle choices. Stomp on tiny Dwarves? Knock down silly shiny Empire buildings? Attack the cold wastes filled with Chaos Warriors for some non-suicidal reason? We’ve all been there, faced with similar dilemmas. Let’s see how he solves it.

Face similar problems yourself in one of our best strategy games.

Ah, crush the head of the closest thing you’ve ever had to a friend and scream incoherently. That’s always been my favourite option.

What’s not answered is exactly how Total War will deal with playing as such a chaotic, unorganised and generally murderously-minded race. It’s never really had to deal with such a society-less people before, though I expect elements will be taken from the various barbarian hordes that have been simulated over the years. Hopefully they’re presented as more than just “the oh-so-wacky bad guys” that it’s easy to stereotype as and given motivation, if not morals.

Sweet trailer though. It highlights just how different these chaps and their armies are from your average Total War fare and is almost enough to make me pretend I’m going to do anything but play Chaos. April 28th will have many skulls to claim indeed.