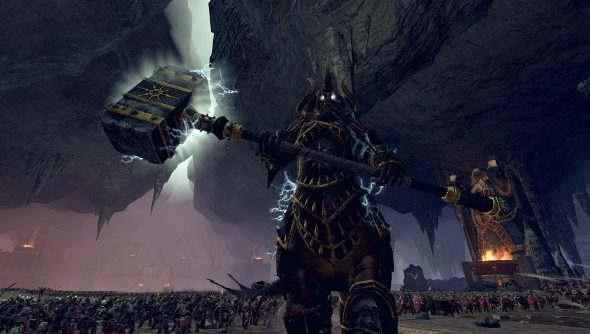 Total War: Warhammer’s Chaos Warriors are a bad bunch, a horde of bullies whose fashion sense sits at the intersection of heavy metal and cosplay, and all they want to do is watch the world burn – and twist and warp – in honour of their dark gods.

Want more battles? Check out our list of the best strategy games on PC.

They’re the villains of the campaign, the game’s antagonists, and though they were a pre-order bonus – although later extended to a free download for anyone who got involved during the first week of release – they feel more true to the tabletop game than any of the core factions, and perhaps even better at showcasing the adaptation’s strengths 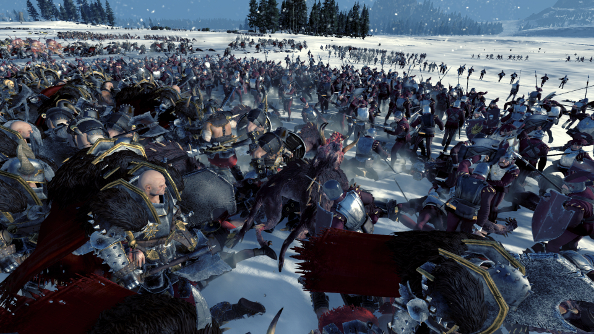 It absolutely feels like DLC, the faction, don’t get me wrong. The Chaos Warriors don’t have cities, they don’t trade, diplomacy is even more limited, and they’re always in motion, pushing forward, sacking, raiding and fighting. There’s very little empire management or building to concern yourself with.

But here’s the thing: that’s all ancillary, and it’s the titanic battles and the Total War that makes the game such a good marriage of franchises. Diplomacy is, as I said in my review, exploitable and shallow, and the empire building really just serves as the infrastructure that allows you to field more and larger armies. The Chaos Warriors don’t really have a typical infrastructure, though, so it ceases to be necessary.

With the fat stripped away, the campaign becomes a chain of increasingly epic battles with few diversions or obstacles to the pace. The Chaos Warriors are at war, or on the cusp of war, with every other faction, aside from some of their fellow Norsemen, right from the get go, and from there their unholy crusade continues unabated. 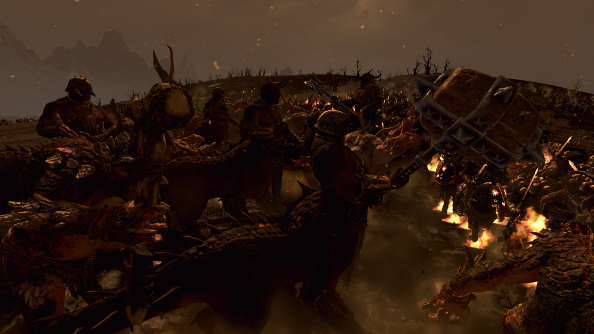 Fighting is the solution to everything. Their economy is entirely based on raiding provinces and sacking settlements, and surrounded by weak neighbours there’s plenty of opportunities to get rich quickly, making it easy to field multiple full armies very early on. And those armies can then go raiding and sacking, paying their way. Working through their simple tech tree unlocks bonuses that mean even more cash can be generated by rampaging marauders.

With everything subservient to war, the unit roster of the hordes of Chaos is appropriately robust. You’ve got your stalwart, heavily armoured knights that make up the backbone of the army, all covered in horns and spikes, accompanied by lightning fast hounds and a mixture of cavalry ranging from axe-throwers to chariots. More exotic units like dragon ogres and the hideous spawn of Chaos spice up the list, and can dish out quite the beating. The only notable weakness is the very limited choice of ranged units, but at least Chaos get some of them, unlike their pals the Vampire Counts.

In fact, their ranged cavalry units work very hard to earn their spot on the list. They have to get perilously close to the enemy to launch their javelins and axes, but thanks to their four-legged friends, they can dart off rapidly whenever a unit charges them, getting back behind the rows of knights, where they can continue to fling their weapons without risk. 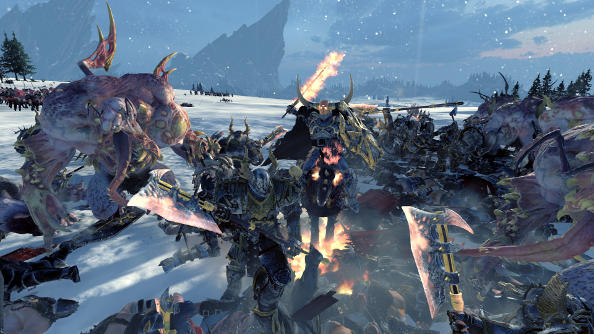 Armies can set up camp, building structures that get packed away when they move on and recruiting new units. As the Chaos Warriors, you never need to worry about breaking off a siege because an invader is marching toward a provincial capital, and holding back out of fear of over-extending stops being a concern.

When they’re an AI foe, the Warriors are a big threat that usually succumbs to death by a thousand cuts. The faction is torn between multiple enemies and often finds itself surrounded by a large, international force. After a particularly tricky series of scraps with Dwarfs, the Empire and even some treacherous Chaos chums, I can sympathise with the AI. It’s hard to prioritise when you’re at war with an entire continent, so it pays to play deviously.

Rebellion can be fomented by the spread of Chaos corruption, and the continent itself is always divided, someone – usually everyone – is at war at all times, making them a prime target for a Chaos invasion. That this is all framed by a story of powerlust and ancient, evil gods makes the insidious and merciless tactics seem even more appropriate. All those sneaky invasions and twisting of the land can be rendered meaningless after only a couple of bad battles, though. The Warriors’ incredible forward momentum comes at the cost of a safety net. There’s no expansive empire to fall back on, to flee toward to lick your wounds. It’s the most vulnerable of the factions. But it’s liberating as well – the all or nothing stakes. 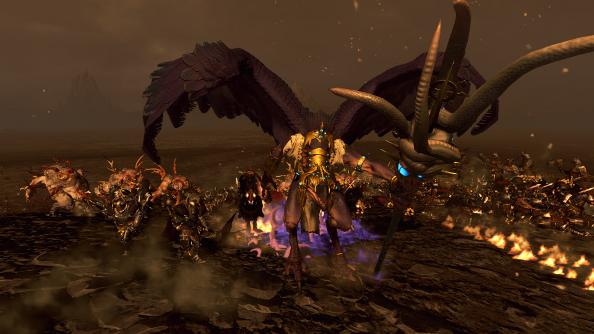 Despite the challenge of facing a whole world of enemies, this is a simpler faction to play, but I don’t think that any of the systems that have been stripped away could be called genuinely complex. They add an extra layer of strategy and more things to worry about, sure, and perhaps the Chaos Warriors feel a bit shallower for their loss, but ultimately they are no less fun. Indeed, for anyone who favours Total War’s gargantuan battles above everything else, I’d suggest they are more fun.

None of this is to say that Creative Assembly should do away with the strategic layer and empire management in future DLC or games. Some of the joy of playing the Chaos Warriors comes from hassling factions that do have an empire to worry about. Those systems still play a role in the Chaos campaign, it’s just that they serve the enemies of Chaos.

It’s a novelty. And I don’t mean that as a pejorative. The Chaos Warriors are a focused, streamlined faction that show off the the best parts of Total War: Warhammer more clearly, but feel more Warhammer, with its unfaltering dedication to combat, than Total War. If I hadn’t poured countless hours into several traditional campaigns, where I was free to tinker with settlements and fret about the economy, maybe I would have missed that while marching out of the north with my Chaos army. I didn’t, though. Not one bit.

The Chaos Warriors DLC is free to download, but today, May 31, is the last day. We’ll likely see it pop up on Steam with a pricetag in the future.