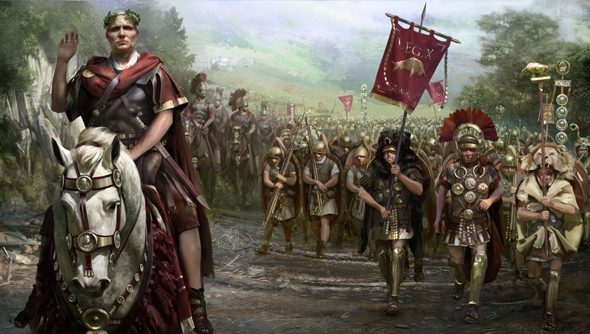 There’s a bit in the trailer for Rome II’s new campaign DLC where the camera swoops low above the trees, like one of Peter Jackson’s helicopters might. As it speeds along the coast, the view quickly begins to lift and – oh Christ, it’s the map. It’s the new strategic map. This game is gorgeous, and you can read more about it in our Total War: Rome 2 review.

It’s a map that takes in future France, rather than the entirety of Europe and its environs – and that narrower, deeper perspective is reflected throughout Creative Assembly’s approach to Caesar’s Got Gall. Which is out, by the way.

The developers have squeezed this new campaign into a tiny timespan, between 58-51BC. As a consequence, turns will take two weeks rather than a year, and you can expect to get rather more done.

The newly zoomed-in Gaul is made up of no fewer than 18 provinces, and you’ll find your troops at the mercy of the seasons. A late autumn might bring in a good harvest, but the long, dry summer that follows will limit food production.

In today’s trailer, we learn that goat cruelty inspired Julius Caesar’s merciless approach to the Gauls:

Blood, blood, blood. Did you hear that part at about 0:47 where Julius Caesar very nearly screamed “Blood for the Blood God?” That’s a struggle he undergoes daily to conceal from the Senate his alliance with the beasts of The Warp. Instead he must pledge his efforts to the rather milder Goddess for Tuna, as he does at 1:02.

Are you tempted by Caesar in Gaul’s promise of tighter focus? And blood?