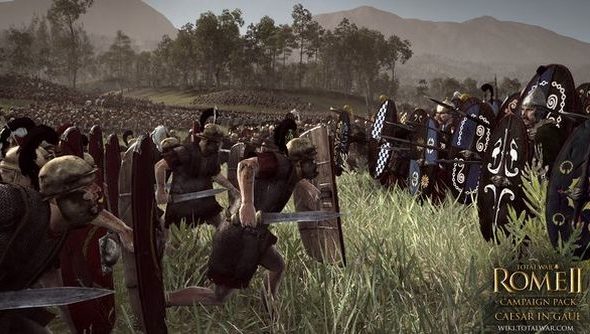 When in Rome, goes the saying. That is, one should work to accept and enjoy others’ norms when in their homes. It’s espoused as a universally-applicable idea, but it turns out the Romans didn’t employ the same logic elsewhere. When in Gaul, for instance, Caesar thought it perfectly reasonable to wage war in the name of profit, the support of Rome’s public, and the ire of its senators.

I suppose we can mull over the hypocrisy of the budding dictator while we conduct his armies and raze future France to the ground. Caesar’s campaign is to be the subject of Rome II’s first expansion pack, which has come a long way since our Total War: Rome 2 review.

Offering a “tighter scope” in both geography and timespan, the Caesar in Gaul campaign map will see players take on the military and economic responsibilities of one of four playable factions: the Gallic Arverni, the Germanic Suebi, the Belgic Nervii or, naturally, Rome.

A new focus on Gaul and the south coast of Britannia will see both more fully sketched out in the manner of previous Total War expansions. The new Gaul will boast 18 provinces, and more factions than its Rome II map equivalent. It’ll be fought over by a selection of historical generals and statesmen, who you’ll recruit or crush according to your newly acquired perspective.

Creative Assembly have promised a greater role for characters – including Caesar himself, Mark Anthony, and the faction leaders who’ll act as player avatars.

Laudably, they’ve also taken a knife to the game’s mechanics, lopping them down to the new campaign’s size. The relatively tiny timespan, between 58-51BC, means each turn will now represent just two weeks rather than a year. Seasons will play a renewed role as a result, and bring their characteristics to bear on the provinces. A late autumn can bring in a good harvest, for instance, but a long, dry summer might limit food production.

What’s more, mid-game ‘challenges’ will mean an ever-changing landscape. As the Romans, you’ll see the Gauls begin to band together against you – and as the Gauls, you’ll find the Romans bring in the (possibly literal) cavalry to deal with your rebellion.

Creative Assembly reckon the tighter focus will make for a great, short multiplayer campaign, and I’m inclined to believe them.

Outside of Gaul, the expansion will add a new historical battle to the game, plus three new barbarian factions for the campaign map proper: the Nervii, the Boii, and the Galatians.

Historically, you might say, the Total War series has always fared best when it’s pulled in its scope and tried something a bit different. I’m still a fan of the original Shogun’s fast-moving Mongol Invasion expansion, myself. How about you?