The battle should be won before you even take to the field. Sun-Tzu probably said that. It sounds like the kind of thing he’d say. As the Egyptians, fighting the Battle of the Nile in Rome 2, you could say the same thing. I outnumber the Romans. I’ve got artillery. I’ve got elephants. I’ve got better troops, and better boats. And I’m on top of a hill.

It should be an easy fight. Hmm.

Rome 2 should be an easy win for Creative Assembly, too. Rome 1 is, in my estimation, their best game. But in the Battle of the Nile, the Egyptians were flanked, by the raw cunning of Julius Caesar. The Egyptian commander Ptolymy slipped as he boarded a ship, fell off the gangplank, and drowned. 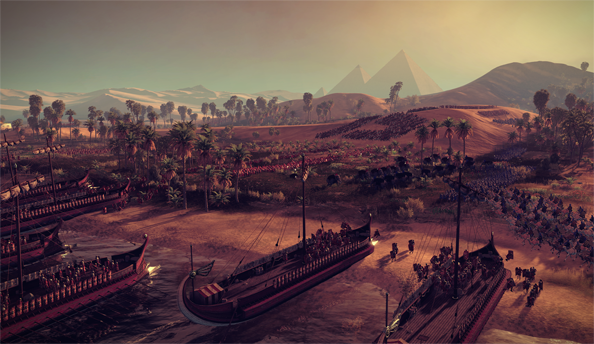 There are two parts to my demonstration. The first is entirely hands-off: I get a guided tour of Rome 2’s new campaign map.

And it’s beautiful. There’s no two ways about it: the sheer sensation of just zooming back and forth over Europe is riveting. It’s a perfect toy scale: like a dinky animated matt laid across a table. It feels more jagged that I remember Shogun 2 being; the mountains really look like impossible obstacles. It’s more varied, too. The Nile delta is bounded each-side by lavish and fertile swampland. That then gives way to the hot dust of the Sahara. Travel over to France and you realise the size of the area you’ll need to defeat: it’s endless forests and grasslands that flow on and on. At it’s most eastern tip, Rome 2 stretches all the way to Afghanistan. It’s vast; a terrifying mass of land to paint your faction’s chosen colour.

It reminds me, as studio communications manager Al Bickham flies across it, of the intro sequence of Game of Thrones; a painted stylised landscape, part model, part moving. More so when he extends the town walls of Antioch and the new buildings rise up out of the ground, as if Winterfell is now a Roman province. It’s beautiful.

The Game of Thrones metaphor continues, a little, with the new political and ‘subject’s systems. Politics and diplomacy has been the series’ achilles heel. Partly because Total War’s focus on expansion and militarism has reduced the role of diplomacy: an alliance is rarely more than a pause button on an eventual conflict. But partly because diplomacy is such a bag of spanners in previous games; wildly unpredictable at best, downright lunatic at worst. 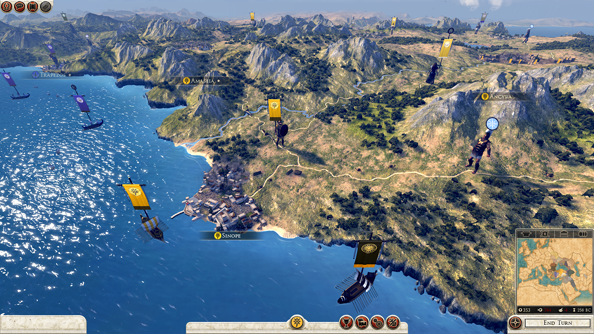 The new diplomacy screen takes a cue from Civilization. Your stances, alliances and actions over the previous turns are displayed as modifiers, adding or subtracting from zero for neutral, negative for opposed and positive for well disposed. Subjugating enemies of your friends? /highfive. Trade agreements with opponents? /deepfrown.

Subjects are a different problem; an attempt to illuminate the politics of Senate life. They’re important people; slaves revolting, gladiators gaining popularity, common folk whispering. While they’re active, they have a specific effect. The example Al faced was Cicero spreading rumours of your ineptitude. We were offered four choices. “Support, Oppose, Discredit or Assassinate.”

Our assassination worked: Cicero was stabbed to death in a marketplace. Woo. I hate that guy.

CA want to give more character to your legions, too. Each legion has their own experience path and tree, with each level gifting a “tradition”, bonuses to how the legion will cope on different terrains, their movement speeds, and special abilities. You can choose a new tradition, or level a previously earned tradition; the idea being, as Al explains, that players can hyper-specialise their units. If that army were to be lost in battle, your experience and evolution isn’t lost: it can be rebuilt, albeit with fresh faced and unbattle-unhardeded troops, at your base. 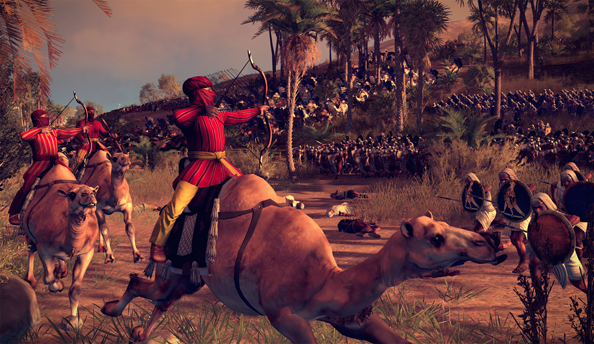 There’s significant changes being made to the end-game, too. In an interview session after the demonstration lead battle designer Jamie Ferguson reveals that beating a campaign in Rome 2 isn’t just about conquering a set number of territories. “Each faction has their own military, economic and cultural victory conditions. And there’s no set time limit on achieving victory.” Players only need to achieve one condition to win the game. Rome 2 also sees the end of Total War’s controversial Realm Divide style endgame; scripted sequences in which the majority of the remaining AIs turn upon you for being too powerful. Players will still face, as Jamie puts it, “an internal crisis”. But they won’t be scripted events. “They’ll be driven by the politics system. As you’re expanding, as a general rule, you will make a lot of enemies. Rather than Shogun 2’s very binary approach of Realm Divide, you’ll more feel like the world is starting to turn against you.”

The history really lends itself to a more fractured, less dramatic end-game,” says Jamie Alexander. “For example, in Carthage, there were lots of families all vying for control. Hannibal wasn’t loved by everyone in Carthage. It’s the same with Julius Caesar. The Egyptians too: they were famous for their infighting.” 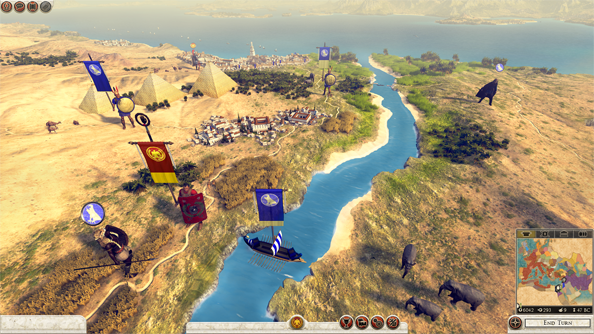 As the day comes to a close, I ask for a second tour of the campaign map. It stretches on, and on, and on. Suddenly, the geography of the Roman achievement becomes so very clear. Europe is sodding massive. Yet the Romans beat it into submission for a bit.

I want to do it myself, so, so badly. Pray that Creative Assembly don’t slip on a gangplank between now and September.