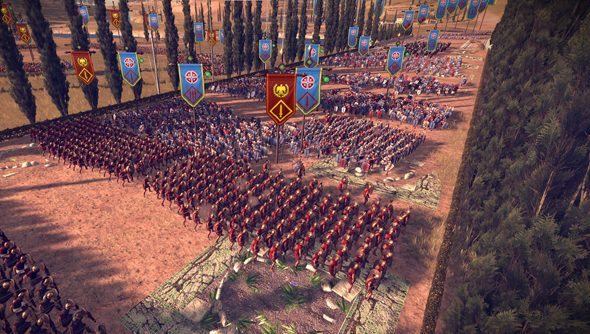 This time last month, Total War brand director Rob Bartholomew told us that he was “confident” that Creative Assembly could pull together a SteamOS port for Rome II. Last night he upgraded his studio’s readiness level to DEFCON “very confident”, and issued a note to Valve’s OS team instructing them to make the news public knowledge.

There will be a version of Rome II on SteamOS – and it’ll likely be ready before most of the Steam Machines are.

“At Creative Assembly we want our customers to be able to play on as many platforms and in as many locations as possible,” said Bartholomew via the Steam Universe group. “We’ve always wanted the Total War franchise to be enjoyed by living room gamers, but the limitations of traditional hardware made our style of game play impossible.”

Bartholomew said that Creative Assembly had been “impressed” last month when Valve had invited the UK developers to test out the new Steam Controller and accompanying OS.

“We believe it will provide us with the control fidelity and platform we need to make a living room experience for Rome II that could be a more compelling experience than playing with keyboard and mouse,” he said.

Steady on, Rob. My keyboard and mouse are right here.

Rome II’s brand new Linux version will launch soon after Christmas. It’ll be free to owners of an existing copy of the game – so grabbing it while it’s 25% off on Steam this weekend makes an inarguable sort of sense. Steam Controller and Big Picture support will come too, just as soon as Valve send Creative Assembly a controller dev kit.

“There’s a huge amount of flexibility in there,” said Bartholomew of Rome II and the Steam Controller in October. “[Valve are] definitely coming from the angle of ‘Well, we know PC games, we know that some games use an entire keyboard’. Total War isn’t really one of those, unless you really love your shortcuts – a lot can be accomplished just with the mouse and WASD.

“Obviously the more advanced players are probably not going to want to play it in their living room anyway because they like that kind of environment of being up close on their desktop, [but] it adds customisability to the game,” he added.

D’you think you’ll be an early adopter of SteamOS and its controller? If so, is Rome II the launch game for you?