Our Tim had a big old chat with Creative Assembly brand director Rob Bartholomew the other day. It transpires the Total War developers have already pointed a portion of their units at Valve’s new Steam Controller, and found it an easy fit for their flavour of sweeping battle management and omnipotent continent-drifting.

A gaggle of business bods and studio heads from Sega’s PC division flew to Seattle on the week of the controller’s announcement, and were delighted to find that Rome II was more than compatible with Valve’s charcoal boomerang – even before Creative Assembly had been able to fiddle with it.

“We were handed a controller – we had it on a big projector in front of the rest of the group – and we had someone’s login to Steam, it was running on Big Picture Mode on this big projector, and we just scrolled over to Rome Total War 2 and hit Go and just messed around with the default controls,” Bartholomew told us.

By default, the Steam Controller’s left trackpad takes the place of the WASD keys, and its right trackpad replaces the mouse. But the Creative Assembly contingent found they were able to jump back to SteamOS with Shift-Tab while playing to reassign keys on the fly.

“And that’s all that any user could do, but if we were designing the next Total War or looking at Rome 2 and wanting to release an official CA Rome 2 control config file, I reckon we could get something within half an hour, certainly within an hour,” said Bartholomew.

“The whole team felt pretty good about that being the control mechanism, and then we could just release that online and guys can share that or customise or add to it or just scrap the whole thing and design their own control config for the controller.” 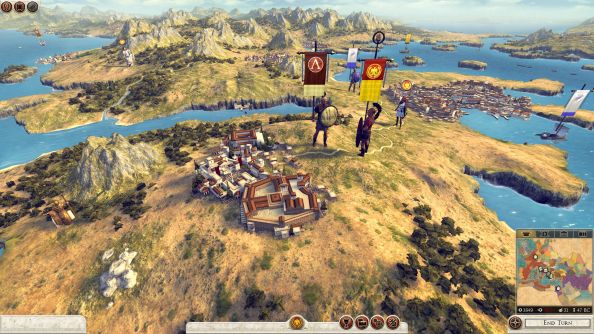 Bartholomew said Creative Assembly would want to make “some concessions” to the controller in the game’s UI before its launch – but a high number of input buttons means the controller offers the same flexibility as keyboard and mouse “at least 99% of the time”.

The middle touch screen, meanwhile, can function as either a single button or a drag-selection box, and offers some “really interesting” opportunities. In Rome II’s campaign map it could display a build queue, diplomacy pane and economic information, or dynamically show settlements with empty building slots waiting to be zapped to with a click.

In battle, the same screen might allow you to keep an eye on units beyond the gaze of your monitor, or hop(lite) to any point on the minimap with a tap.

“There’s a huge amount of flexibility in there, and [Valve are] definitely coming from the angle of ‘Well, we know PC games, we know that some games use an entire keyboard’,” Bartholomew went on. “Total War isn’t really one of those, unless you really love your shortcuts – a lot can be accomplished just with the mouse and WASD.

“Obviously the more advanced players are probably not going to want to play it in their living room anyway because they like that kind of environment of being up close on their desktop, [but] it adds customisability to the game.

“The option’s yours; you’re not stuck with a traditional controller that only has a certain number of functions on it – you can to a certain extent reduce and expand the Steam Controller as much as you like.”

The controller will form a crucial part of Steam’s next decade, and maybe too all of our evenings and weekends. Are you sold on it yet?