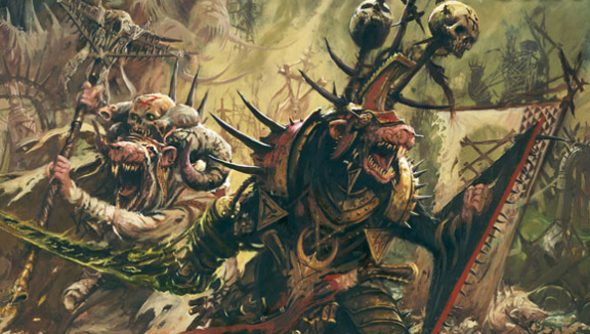 Bloody hell. Creative Assembly and SEGA have struck a deal with Games Workshop for multiple games set in Warhammer’s fantasy universe. A new development team has been set up at the West Sussex Total War studio and has already begun work on the first. We’re dubbing it Gnome: Total War.

Update: We have confirmed that Dawn of War forgers Relic still have their 40K license, as suspected. Phew.

“With this year being our 25th anniversary”, said Tim Heaton, Creative Assembly studio director, “it seems fitting for us to embark on such a dream project with such a well-established partner. The incredibly rich and detailed Warhammer world is something we grew up with, and has left an indelible imprint on us as both designers and gamers.

“We’ll be doing the Warhammer universe justice in a way that has never been attempted before. We’re bringing those 25 years of experience and expertise in extremely high-scoring games to bear, delivering a Warhammer experience that videogamers will absolutely love.”

Games Workshop’s head of licensing Jon Gillard added: “We have enormous respect for SEGA and Creative Assembly and have felt for a long time that the combination of the enormously rich setting of the Warhammer world, and their stunning development talent is a match with huge potential.

“Now that we’ve managed to bring these two giants of gaming together it is safe to say that some truly amazing products are going to be unleashed as a result. We are excited at the possibilities, and are enthusiastically working with the team at Creative Assembly already.”

Bloody hell. The wording of CA’s press release – which specifies “the Warhammer® universe of fantasy battles” – suggests that the studio will be responsible solely for games set in Games Workshop’s Tolkein-esque world of goblins and skaven, while the 40K universe presumably remains in the capable clutches of Relic.

Until recentlyEA controlled the fantasyWarhammer license used for Mythic’s Warhammer Online, but it hassince transferred to SEGA – and now to the jewel in their developmental crown, Creative Assembly.

For the first time in years, I’m thinking of cruel Warhammer Total War-alike Shadow of the Horned Rat. Anybody else play that?