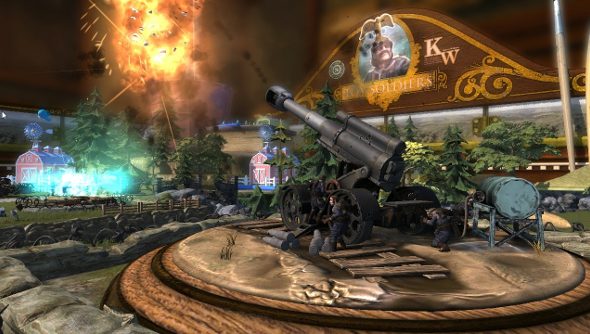 While I never got round to diving into the diorama world of Toy Soldiers, I spent a fair amount of 1998 dabbling in the world of Army Men, and the conceit appears to be the same. Armies of toys duke it out in a child’s bedroom, finally free from the shackles of their human owners.

Toy Soldiers pit tiny troops from the First World War against each other, while Toy Soldiers: Cold Wars brought in 80’s action figures. In Toy Soldiers: War Chest, the Kaiser’s army returns, facing three other armies. Only one of them has been announced, and it’s certainly a surprise.

I cannot contain my excitement at the prospect of a rainbow unicorn charging at a tank.

The other two factions are secrets, at least until closer to launch, which should be early next year.

The original game was published by Microsoft, but developer Signal Studios has partnered with Ubisoft for this one. “Partnering with Ubisoft presented an opportunity to create the Toy Soldiers game we had always envisioned,” said Signal Studios founder, D.R. Albright III. “Gamers of all ages can play as and face-off against toys familiar to them from their childhood to recreate the battles of their imaginations. Fans will have a great time learning how each army plays, and the individual strengths of their troops and weapons.”

Did any of you lovely lot play the first one?