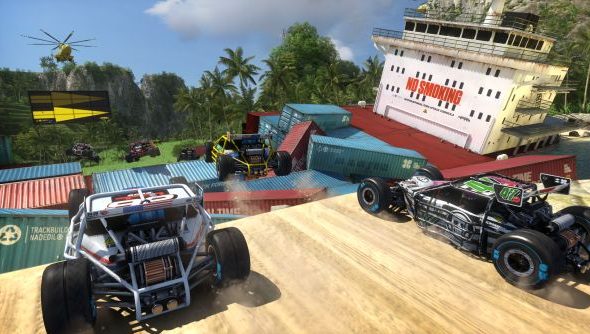 Ubisoft send word that Trackmania Turbo will be bringing its brand of loop-the-loop racing and impossi-tracks to VR when it releases next year, for both the Oculus Rift and Playstation VR platforms. The news arrives alongside a pair of trailers showing off the game’s variety and how 360 degree vision will work. Given the nature of Trackmania as a super-fast, arcade-style racer with gross disregard for the laws of physics, I expect a few will lose their lunch when trying it with a headset.

Racing games come in all shapes and sizes. Here’s which we think are best.

First, some fancy YouTube tech lets you look around in this video by clicking and dragging, simulating moving your head in VR:

As a Trackmania Nations Forever veteran of more hours than I’d like to count, that still managed to give me a headache when moving it around. While I remain unconvinced that I’ll be able to spend more than thirty seconds in VR without a migraine and empty stomach, Trackmania is the perfect game for it, with a first-person mode that strips away any UI elements or screen furniture, focusing purely on the rollercoaster ride. However, the angles are going to take some getting used to.

Nadeo have also released a developer diary from Creative Director François Allaux, talking about everything from different modes to the design of roadside signs. Top marks for the title pun too:

I’m quietly excited for Turbo, as Trackmania holds a special place in my heart as one of very few racing games I ever got into. It’s not the Rollcage Stage 3 or Firebugs 2 my weapon-focused heart is dying for, but it does scratch an arcadey, constant-restart itch. It was always the master of decent keyboard controls too, managing to have subtlety of acceleration and steering despite just using the arrow keys. NB: it’s possible I was just too young and stupid to notice how awfully it controlled. Ever gone back to Lego Racers? Don’t.

Trackmania Turbo was recently delayedinto 2016, so it’ll be a bit longer until we get to enjoy the loopy highs and swoopy lows.