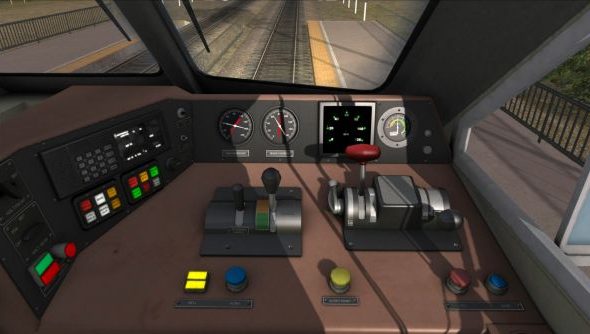 The most iconic rail imagery tends to be strictly European: the Steam locomotives that terrified Victorian England; the Ringo-voiced, grey-faced engines of Thomas the Tank; the express train which overran its buffer stop and crashed through the Paris Montparnasse.

But today’s second most exciting standalone expansion pack concerns the American West Coast – and its debut trailer makes a strong case for engines faded by sun, not rain.

Of course, the downside is that developers RailSimulator.com no longer have any excuse to rope in Sean Bean for vocal duties. Here’s a nice Californian instead:

The 128 mile route between LA and San Diego incorporates landmarks like downtown LA’s art deco Union Station, the baseball cathedral known as Angel Stadium and several beautiful beaches. All are recreated in the game’s simulation, and are viewable from the Pacific Surfliner, either from the cab, business class or café car – your choice.

RailSimulator have devised nine new scenarios for the route, and you needn’t own the base game to play. Just head to Steam, where you’ll find Pacific Surfliner for £15 thanks to the ongoing Steam Autumn Sale. Do you think you’ll be watching the beach from the tracks this weekend?