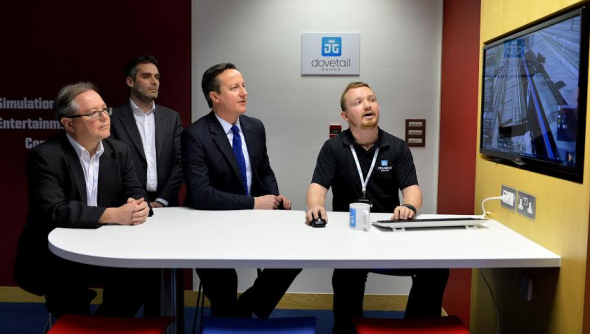 Dovetail Games were visited by British Prime Minister David Cameron today. He says it was to announce a new Help to Grow scheme aimed at developing small businesses but the truth is it was so he could get a sneak peak at Train Simulator 2015’s upcoming DLC.

An avid fan of Train Simulator for many years now, David Cameron used his position as the supreme elected official of the British isles to visit its developers Dovetail Games. Ostensibly his visit was to make an announcement but the 48-year-old politician put up a fight when it came to the end of Train Simulator demo.

When his PR managed to pry his hands off the keyboard and turn him to face a camera long enough he said “Businesses like Dovetail Games are a crucial part of our long term economic plan for the country, and it is thrilling to come and see the role they are playing in Britain’s economic recovery.”

At this point two of his security guards had to grip him under the shoulders to stop him running back to his game of Train Simulator. “Here is a business that six years ago employed eight people and now employs 98,” he continued, maniacally. “It is growing by about a third every year and wants to stay right here in Medway and continue its expansion and success.”

A third guard took hold of his legs in an attempt to have him focus on his announcement but an on-scene medic was forced to administer a tranquilizer before would complete his announcement: “Too many fast-growing businesses still find it hard to access finance, particularly those wanting to take that next step to becoming a medium-sized business. That’s why today I’m announcing that the British Business Bank will start a pilot scheme at the Budget with at least £100million of new lending and help us grow our businesses and create jobs.”

Finally, his announcement complete, the guards and medic allowed him to slump in front of the monitor and complete his virtual journey between Bristol Temple Meads and London Paddington.