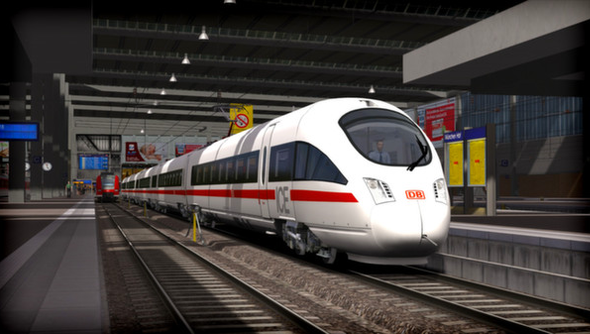 Dovetail’s latest sim, Train Simulator 2015, has just launched in the Steam Store, bringing with it new trains, routes, and, for the first time in a Train Simulator game, an academy to take you through train driving step by step.

Another significant addition is support for the Oculus Rift virtual reality headset.

I was able to ask producer Adam Lucas some questions about the recent rise of sims.

The past few years have seen a boom in simulation games, covering familiar topics – planes, trains, and automobiles – to the more obscure. Dovetail’s TS2015 trailer embraces that:

Lucas thinks part of the reason is that sims work as compelling family games. “Those 8bit gamers of the 80s and 90s are now parents, and they are looking for game experiences they can involve their children in,” Lucas told me. “It is a hobbyist mentality, but instead of the family gathering to build a model boat from balsa wood, they get together and drive trains, catch fish or fly airliners.”

The team have also worked to make their games far more accessible. “Dovetail Games have embraced the available technology to bring sims to a wider audience, such as supporting Xbox360 controllers to take the player experience to a more casual audience,” he said.

TS Academy is another big step to lowering the barrier to entry that older sims had. “There you learn the basics (and the not so basic) principles of driving steam, diesel and electric trains, both passenger and freight,” Lucas explained. “From there, the user is equipped to handle anything their driving career will throw at them, be it handling an ICE T through the Bavarian mountains at speed, or taming a 10k ton freight train on a DLC route like the Southern Pacific Donner Pass.”

Also, there’s so much DLC knocking about for the TS games that it’s easy to expand your game in small chunks. If you’ve played through all the base game has to offer then you can buy a new train and drive the old routes again or buy a new route and trial it with all your familiar trains.

TS2015 even gives players the chance to drive unfamiliar trains, “in the case of the Class 801, star of TS 2015, the fans won’t even see a real one for another 3 or 4 years.” This is the result of a relationship that Dovetail have formed with Hitachi Rail Europe after years of researching and recreating their trains. “We have worked with them on several projects now and it’s a very rewarding and complementary relationship,” Lucas recalls. “They provide great assistance with research and licensing, and we provide them with fully working, driveable recreations of their cutting edge trains, which will be driven and enjoyed by TS users everywhere.

“We do everything we can to capture the look, sound and driving characteristics of the real trains including surveys and cab rides whenever possible. Our users are discerning and theycan tell how much effort goes into what we create.”

All this works ties into why one of the most exciting additions to TS2015 is the Oculus Rift support. It makes the experience uncannily realistic. “The very first time we all tried Oculus Rift with Train Simulator, we were blown away. The sense of being in the cab, being there with the world unfolding around you is staggering. Your natural instinct is to reach out and grab the controls!”

The sim genre seems a natural fit for the technology, adding a layer of depth to the simulation by being completely free to admire the interior of your train’s cabin.

Dovetail are exploring other ways to implement the headset, finding ways to work it into their other simulations such as Microsoft Flight Simulator and Dovetail Games Fishing.

You can already pick up a copy of Train Simulator 2015 through the Steam Store.