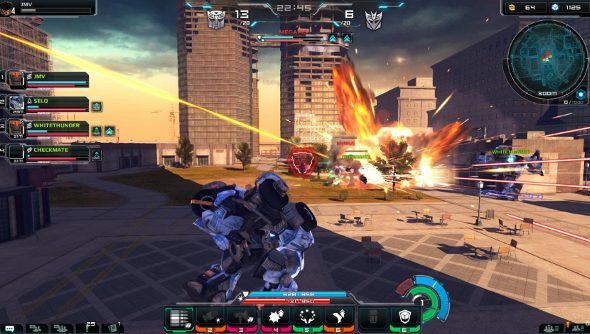 Transformers Universe, Jagex’s MOBA with robots in disguise, is shutting down for good. The developer made the announcement earlier today, saying that Jagex and Hasbro will “realign their plans and focuses for 2015”. The Autobots and Decepticons will need to fight their war somewhere else.

Full closure of Transformers Universe will take place at 10am GMT on January 31st.

“As a team, we can’t thank players enough for the support that they have shown us over the last few years of development, and even more so during our BETA period,” Jagex said in the announcement.

Everyone who bought a founders pack will be entitled to a refund, along with anyone who bought relic bundles or starter packs. The refunds will be made in the next 30 days.

While no new accounts can be made, existing accounts will remain active for a time, and players will be able to keep punching robots until January 31st. The forums will also remain active between now and the last day.

Transformers Universe started off an MMO before Jagex morphed it into a MOBA. Jagex was also considering layoffs last month, saying that the downsizing was just a product of that stage of development.