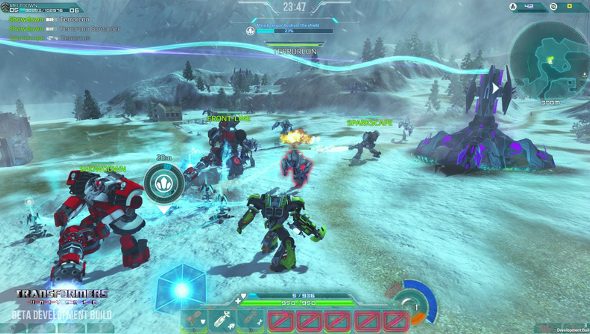 Tomorrow will see Jagex’s Autobot vs. Decepticon MOBA, Transformers Universe, move into open beta. To celebrate the new phase of the game, Jagex is putting on a bunch of activities, two competitions and a double XP weekend.

If you’re not sure you want to dip in, take a gander at Steve’s Transformers Universe preview.

Those with a competitive bent might want to try their luck and achieve the top skill score over the weekend. The skill score measures your success over the past hour, gathering your wins, draws, losses and KDA stats. The top three players in each level bracket and faction will receive up to $3,000, which isn’t bad for playing a game about robots punching robots.

The second competition isn’t a contest of skill, rather it’s a popularity contest and an attempt to get more players duking it out. Players who recruit enough new bodies – that get to level 5 – using the recruit a friend feature can win up to $5,000. Even if you’re only the tenth most successful recruiter, you’ll still get $1,000.

So don’t waste your time trying to faff around with skill scores, just pester your chums.

More prizes will be given out during the 24 hour livestream on the 5th, to boot.