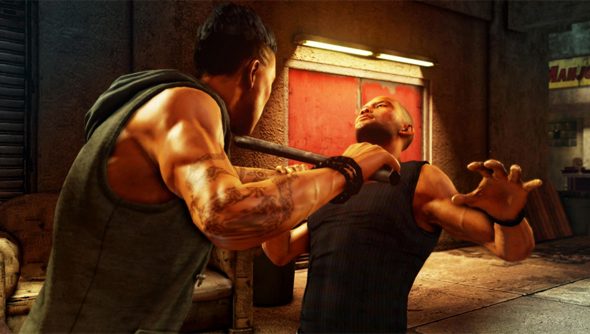 “Triad Wars is the flipside of Sleeping Dogs,” explains designer director Steve Ferreira. “Sleeping Dogs was all about the story of Wei Shen. Taking you on a ride along that story, finding out what was going to happen to [him].

“Triad Wars is the other side of that, which is all about Hong Kong, and all about the criminal underworld within Hong Kong.”

You’ll play as an enforcer – a sort of mini-boss in charge of their own gaggle of gangsters. Using roughly the same driving, running, shooting and fighting verbs as Sleeping Dogs, you’ll be raiding the homes of other players and taking their stuff.

Above that, there’s an empire-building meta-game. United Front refer to “action-strategy”, and early footage shows an expanding base of operations. A player’s turf will be “an extension of their personality”, as expressed through the rackets they choose to run. There’ll be plenty of murder, sure, but also optional sidelines in counterfeit currency, smuggling, extortion, hacking and car-theft.

Unlike Sleeping Dogs, Triad Wars “doesn’t tell a linear story” – rather, it’ll offer a “different experience to everyone else who plays it”.

United Front are spouting a familiar line about community engagement, too – they say the game will “change and evolve over time as people play it”. There’ll be a closed beta, which you can register for on the Triad Wars site.

You interested in returning to Hong Kong for a splash of martial arts-infused mayhem?