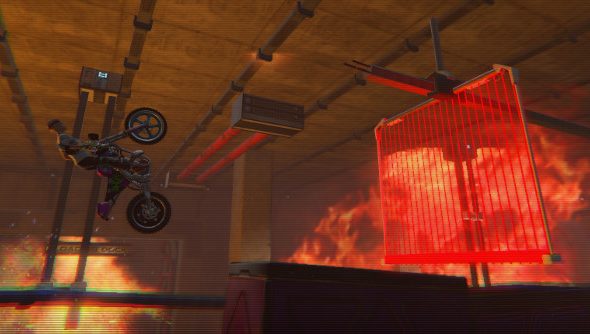 At E3 2016, Ubisoft announced and then immediately released Trials of the Blood Dragon, a peculiar mashup of the stunt bike game and neon Far Cry spin-off. Bikes, explosions, giant dragon things, ‘80s nostalgia – it sounds like a treat. So much so that I decided to take a break from consuming all things E3 to spend a day performing stunts and getting all nostalgic over what was, let’s face it, a pretty crap decade.

Unfortunately, Trials of the Blood Dragon is as confused as I was that one time I got an erection during a trigonometry class. It’s a hodgepodge of ideas, some of them not very good to begin with, others that never come together, and most of what make both individual properties appealing and fun have been ignored or warped into something unrecognisable and surprisingly dull.

Rex Colt, super soldier and hero of Far Cry: Blood Dragon is dead. Taking the mantle of super-cool ‘80s action hero are his kids, teenage spies, tasked with taking down drug dealers, Vietnamese cyborgs and the odd helicopter. A disinterested pair of voice actors blurt out banter and one-liners that even they don’t seem to find funny, and they’re right: Trials of the Blood Dragon is painfully unfunny. 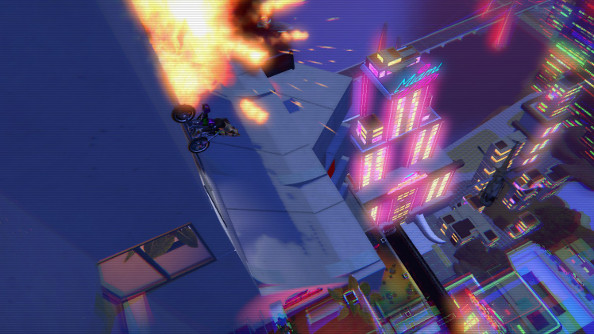 Its predecessor might have felt a bit forced when it came to the jokes and ‘80s references, but damn did it try hard to make players laugh. Its dedication to its premise made it endearing. Trials of the Blood Dragon, on the other hand, basically pulls a Big Bang Theory. It mistakes references for humour, and they aren’t even particularly grounded in the neon-future world they take place in. There are Pokemon references, lots of nods to Hotline Miami, a whole series of levels inspired by Indiana Jones, and they never go anywhere.

Aside from the aesthetic – gaudy neon cityscapes, giant Vietnamese factories full of things waiting for you to blow up, even space – little of what Trials of the Blood Dragon inherits from Ubisoft’s shooter actually adds anything of worth. Indeed, it tends to ruin what could have been a diverting Trials game.

The biggest crime is that almost half of the game takes you off the bike. That’s right: this is a Trials game where you spend a lot of time not doing absurd stunts on your bouncy vehicle. Instead, you get to enjoy a slew of appalling platforming and shooting sections, complete with floaty, imprecise movement and jumping and… well not much else. You can blow stuff up. That’s alright. These sections could have been considerably better and still wouldn’t have been able to justify their existence. 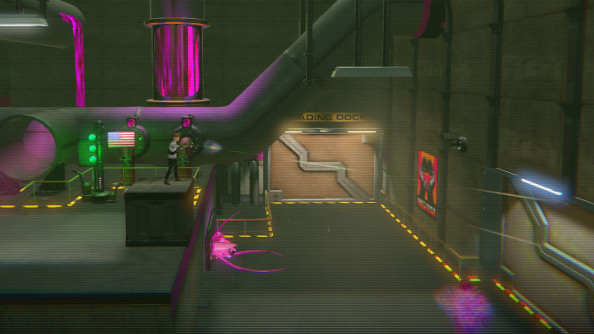 Entire levels are dedicated to these platforming and shooting antics, but somehow it’s even worse when you’re in the middle of a bike level and suddenly you’re forced to stop flying through the air, spinning like a loon, because it’s time to shoot some dudes and jump across platforms again.

Strip away the off-bike segments and the gags that aren’t really gags, and you’re left with a decent Trials game. Too often the game presents you with a big jump and nothing else to make it special, so you’re just going through the motions – perhaps less of an issue if this is your first Trials game – and there’s the sense that some of the levels are playing it safe, relying on the spectacle of Blood Dragon rather than the challenge of a tricky course, but these are mostly relegated to the early parts. It soon ramps up, offering imaginative, gravity defying tracks that require you to ignore your brain and your senses.

There’s been a genuine attempt on RedLynx’s part to freshen the series up with new vehicles, on-bike shooting and grappling hooks, with varying degrees of success – the shooting is awful, the grappling bits are okay, and the new vehicles (and a jetpack) run the gamut from great to just plain rubbish. 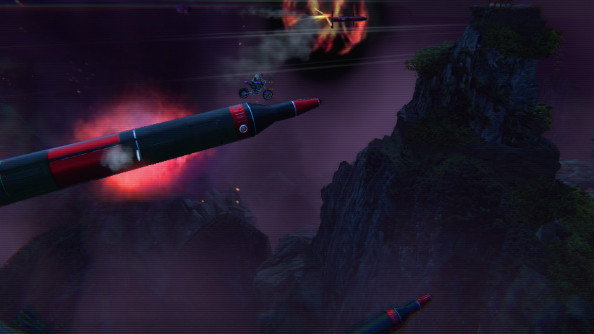 Most of the problems I encountered while speeding through crumbling mines and military bases have existed throughout the series, so may grate less if you’re already a fan. The camera is wonky, obscuring the track and thus ensuring your demise, and the explosions, while making things admittedly exciting, can make the game hard to read. Importantly, though, riding your silly bike through these silly levels remains fun.

Yet, for the first time in a Trials game, I have almost no desire to repeat levels, and that’s kind of the point of the game. My first attempts have been almost all terrible – netting me lots of Cs – because the game is really about memorising traps and pitfalls that you couldn’t possibly prepare for unless you’ve gone through a level already. But since so many of them contain unwanted on-foot parts, I just can’t be arsed putting myself through them again. And I’ll rip my ears off if I need to hear anymore of what Trials of the Blood Dragon considers witty banter.

Now that I’ve stopped playing, I feel relief rather than the familiar itch that draws me back in, to beat my scores and search for shortcuts. I honestly have no idea who Trials of the Blood Dragon is for. It’s not even a bad Trials game, because it’s barely a Trials game at all. If you enjoy either of the franchises that are to blame for this pointless offshoot, then you’ll only be disappointed.